Making new stamps from old with overprints and surcharges 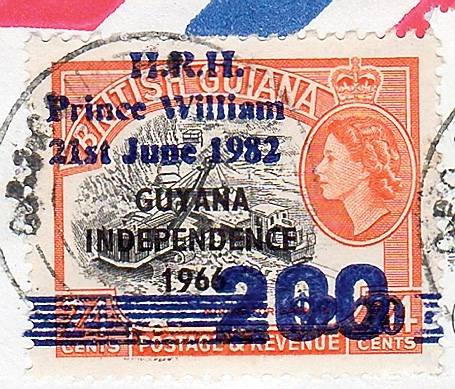 One final (or perhaps not) surcharge on the 1954 24¢ British Guiana stamp changed the already overprinted denomination of $2.20 to $2. 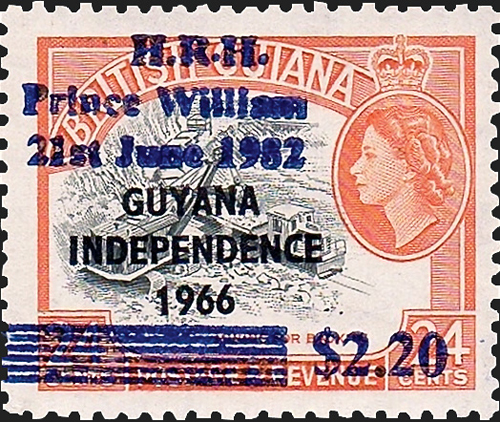 Overprints and surcharges on a 24¢ British Guiana stamp of 1954 reflect national independence and the birth of a prince. 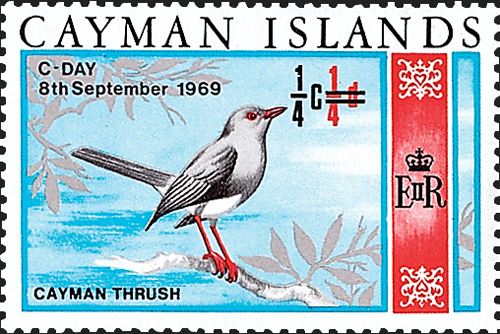 Changing from sterling to decimal currency, the Cayman Islands altered a ¼-penny Grand Cayman Thrush stamp in 1969 with a ¼¢ surcharge. 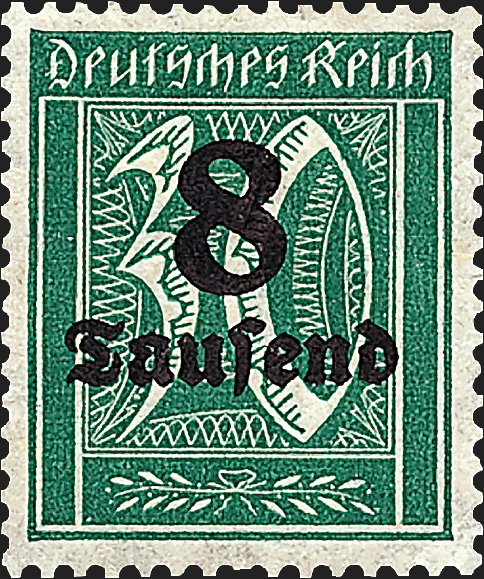 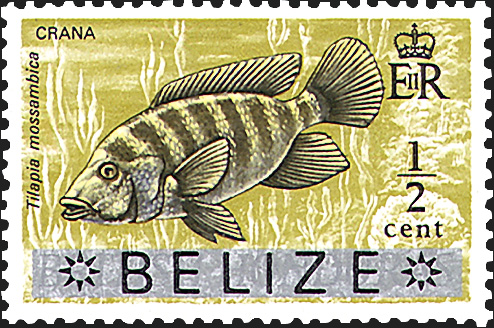 British Honduras became the newly independent nation of Belize in 1973. Existing stamps were overprinted "Belize" until new ones were issued. 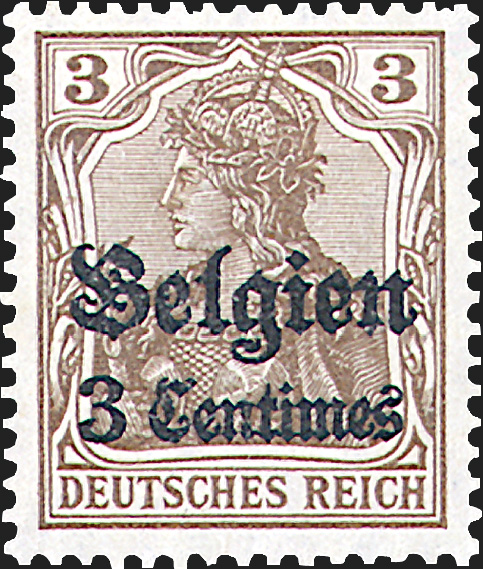 Germany occupied Belgium in World War I, overprinting and surcharging stamps of Germany in the German language and in Belgian currency. 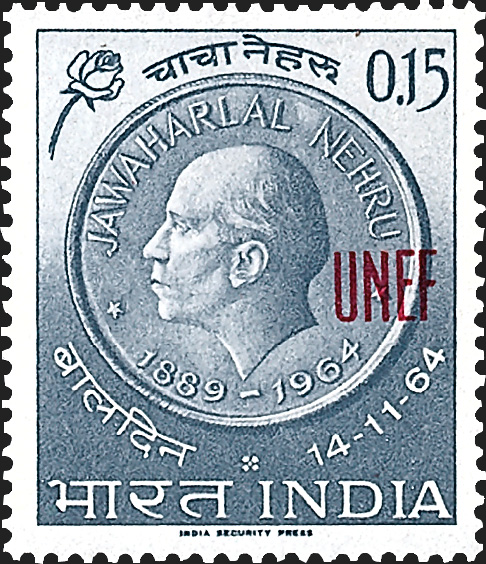 A 1964 regular stamp of India was overprinted “UNEF” the next year for military use, sending the new stamp to the back of the book as India Scott M62. 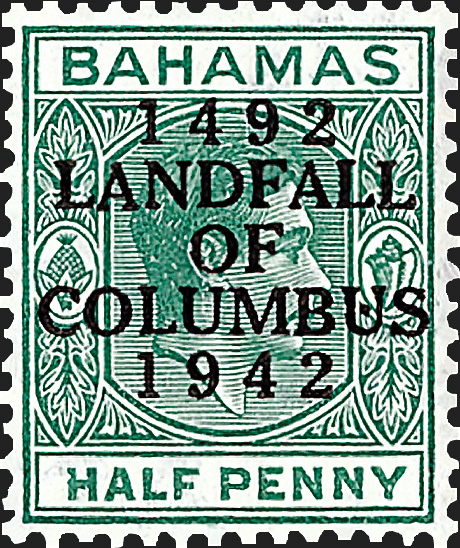 Originally a 1928 Bahamas issue, Scott 100, this stamp’s commemorative overprint, added in 1942, made it into Scott 116.
Previous
Next

"Overprint" is a term used to describe stamps that have additional printing added on top of the original image on the stamps. An overprint might be applied for a commemoration, to change the purpose of the stamp or to mark a geopolitical change.

The addition of the overprint changes the stamp into a new issue in the eyes of collectors, and the stamp then receives a separate listing in the Scott Standard Postage Stamp Catalogue.Scott 100 of the Bahamas, a 1928 ½-penny stamp depicting King George VI, received a commemorative overprint in 1942 to mark the 450th anniversary of the landing of Columbus in the New World in 1492.

In this case, the new overprinted stamp is listed as Bahamas Scott 116.

The basic 15-paise Indian stamp depicting the Nehru medal was issued Nov. 14, 1964 (Scott 393). It was overprinted "UNEF" (United Nations Emergency Force) in January 1965 for use by Indian military forces serving in Gaza.

This overprint changed the regular postage stamp into a military stamp for the exclusive use of active-duty soldiers. The UNEF overprinted stamp is Scott M62.

Overprinted stamps, whose added printing has altered the purpose of the original stamps, usually (but not always) are found among the numbered stamps with letter prefixes that are listed in the "back of the book"; that is, following the regular numbered issues in the Scott Standard catalog.

Geopolitical changes can quickly find their way onto postage stamps by overprinting existing issues, rather than waiting to design, print and distribute new stamps when a country is occupied by another nation or changes its name or politics.

German definitives of 1906-11 depicting the allegorical figure of Germania were overprinted and surcharged in 1914-15 for use in Belgium during the German occupation in World War I.

For example, in 1914 a Germany 3-pfennig stamp was overprinted "Belgien" in German but surcharged in Belgian currency, "3 Centimes," to become Belgium Scott N1.

A surcharge is a type of overprint that changes the monetary value of the stamp, or documents a change in currency.

During Germany's hyperinflation period in 1923, many regular stamps received overprints of huge surcharges, such as Scott 241, a 30pf stamp surcharged with a denomination of 8,000 marks.

Around the middle of the 20th century, many nations within the British Commonwealth changed from sterling to decimal currency — from pounds and pence to dollars and cents.

The crown colony of the Cayman Islands was among them, and in September 1969 it issued stamps surcharged in dollars and cents on pound and pence definitive stamps that had been issued just three months earlier. Scott 227 was surcharged ¼¢ on the ¼p denomination (Scott 210) showing a Grand Cayman thrush.

It gets really interesting when a stamp is overprinted as well as surcharged, and even more fun when the stamp has been overprinted more than once and then surcharged.

Let's examine the British Guiana stamp illustrated with this column.

First, you have to go back to 1954 to familiarize yourself with the original 24¢ stamp (Scott 261) bearing a portrait of the very young Queen Elizabeth II and, barely visible through the layers of overprints, a vignette that shows bauxite mining.

Fast forward 12 years to 1966, when the stamp receives its first overprint, but now it is no longer a British Guiana stamp. Independence has arrived, and the country is called Guyana, the event that the overprint commemorates. The Guyana Independence stamp is still a 24¢ denomination, now cataloged as Guyana Scott 13.

I know what you must be thinking — how much more could possibly be done to this stamp?

Well, check out the stamp shown graphically cropped from its cover: It is the same Guyana independence/Prince William birth/$2.20 surcharge that evolved over time on this 1954 British Guiana stamp, but now there is an additional surcharge overprinted on the $2.20 surcharge.