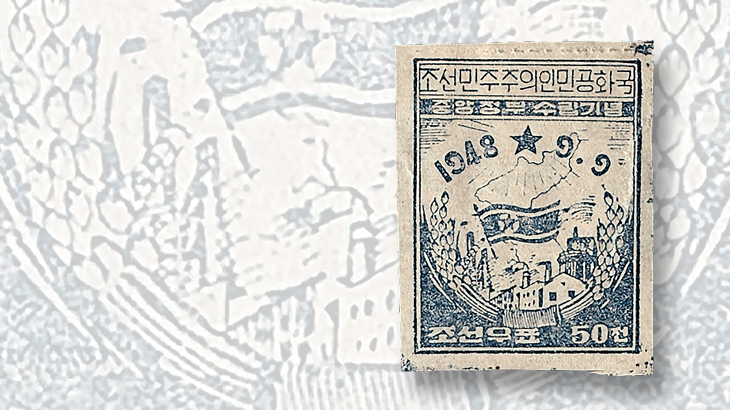 Some careful research revealed this stamp as being a 1948 issue from North Korea. 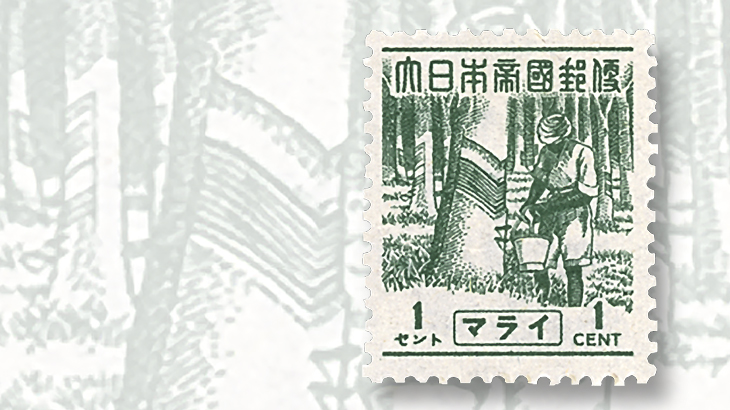 A rubber tree is tapped on this stamp from Malaya during its 1943 Japanese occupation. 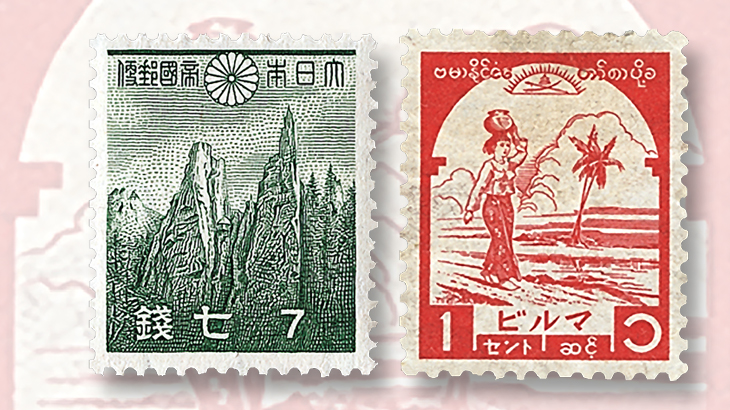 These stamps are from Burma during the Japanese occupation: at left, from 1942, and at right, from 1943. The stamp at left includes Japan’s imperial chrysanthemum symbol. 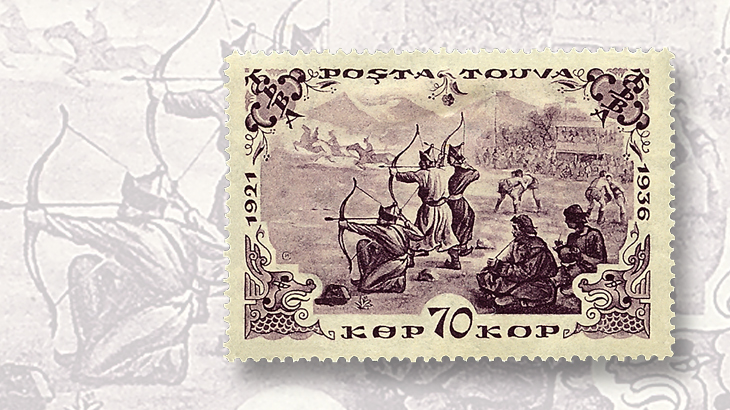 Tannu Tuva’s later stamps, such as this one from 1936, depict interesting scenes of local life. 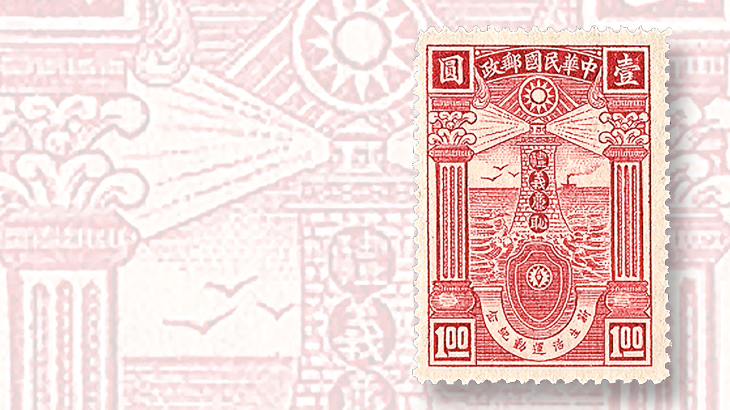 Helpfully for Westerners, China’s stamps have the country name in the European alphabet. A sunburst, as on this 1936 issue, also is a typical symbol on China stamps. 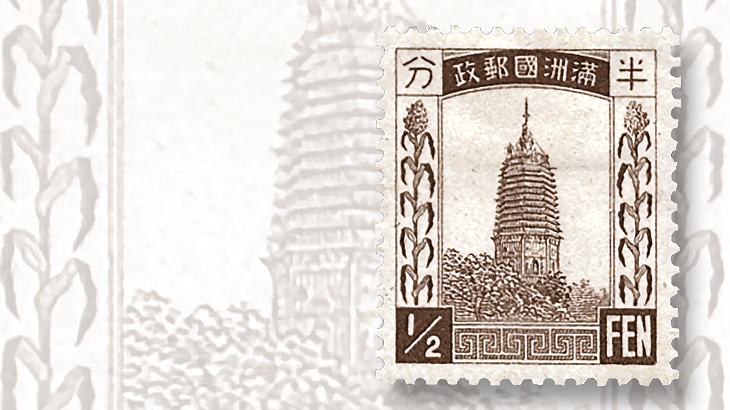 Manchukuo was a puppet state of Japan when it issued its first stamp in 1932. The denomination in fen helps narrow down the country of origin. 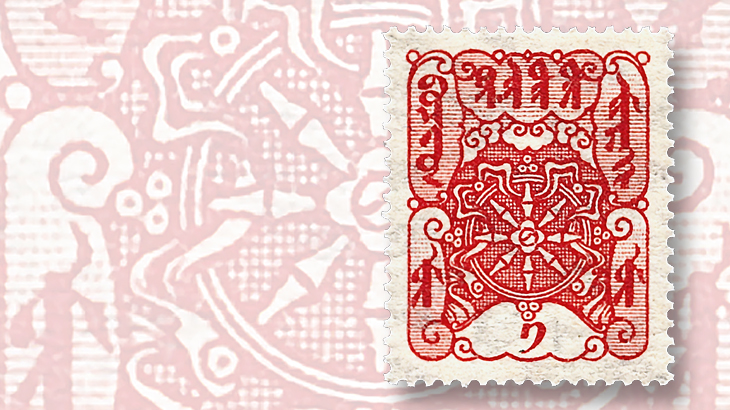 Tannu Tuva’s first issue, a 1-kopeck red issued in 1926, shows the Buddhist Wheel of Truth, with wording in Mongolian. 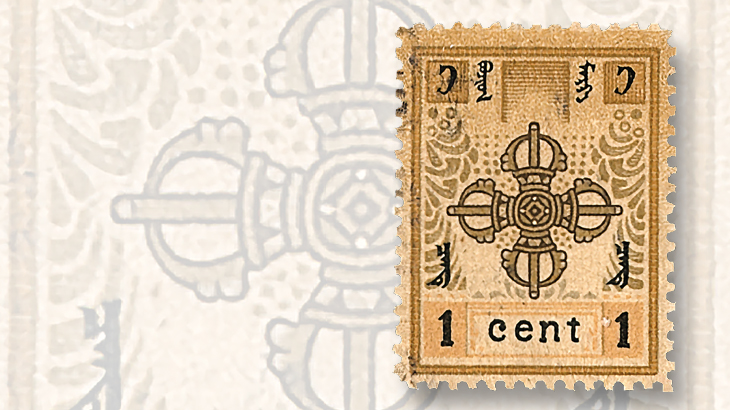 Mongolia chose a symbol known as the Scepter of Indra for its first stamp issue, in 1924. 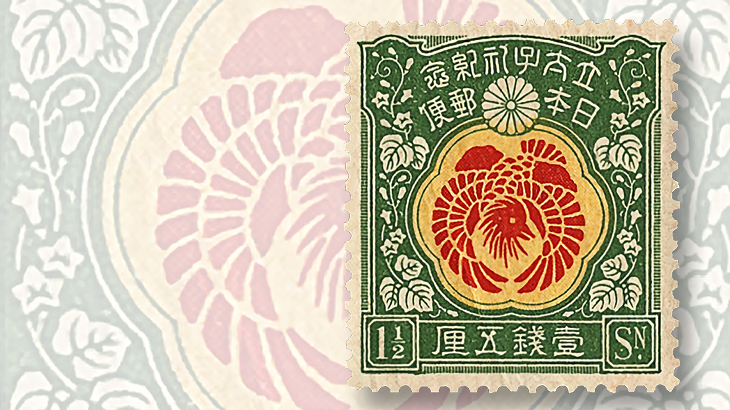 The imperial chrysanthemum symbol above the mandarin duck helped to narrow this 1916 stamp’s origins to Japan (Scott 152). 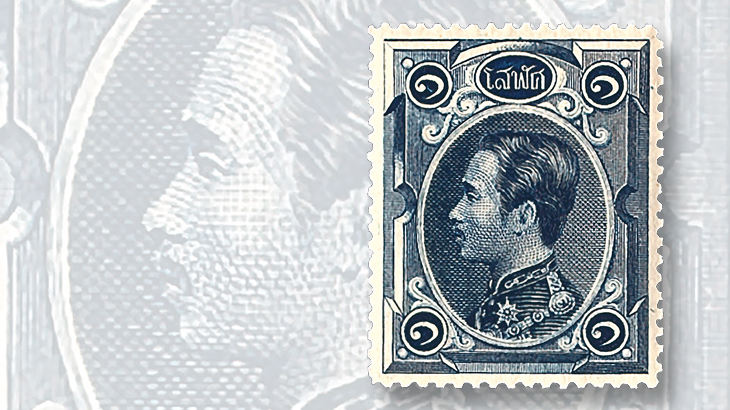 King Chulalongkorn appears on the first stamp of Siam (Thailand), from 1883. 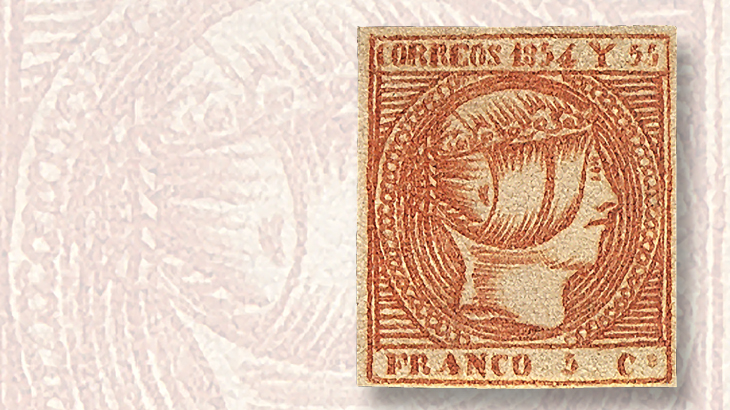 Queen Isabella II of Spain is honored on this 1854 stamp, but the issue is not from Spain; instead, it is from the Philippines.
Previous
Next

Stamps printed without a country name, especially from countries using a different alphabet than ours, present a definite challenge for stamp collectors.

Having a stamp identifier book nearby is helpful. Linn’s Stamp Identifier is extraordinarily useful, though even with that handy reference it sometimes can take a while to be able to answer the question, “Where is this stamp from?”

The first illustration pictured here shows a stamp that had been crudely printed with inscriptions in an alphabet that was unfamiliar to me.

The flag with a five-pointed star in its center might have been a good clue, if so many nations didn’t have a single-star flag. However, useful websites of flags can be found by entering “flags of the world” into your favorite Internet search engine.

At this point, I turned to the Linn’s Stamp Identifier. The easiest tool in the book, which alphabetically lists country names as they appear on stamps and then provides the English equivalent, was not helpful in this instance, because the characters on the stamps were not in the standard European alphabet that is most familiar to us.

The next step was to consult the stamp identifier’s section on alphabets, which includes Greek and Cyrillic words on stamps and their English translations. There were no matches there for the inscriptions on what had become a mystery stamp.

The final chapter of the stamp identifier has images of difficult-to-identify stamps. I was beginning to think this mystery stamp was Asian. Some of the images in the book showed several Burma stamps that had inscriptions similar to, but not exactly like, those on my stamp. The pages continued to be turned until I found a stamp pictured that had an inscription very closely matching my mystery stamp. It was from Korea.

I immediately looked in the Scott Standard Postage Stamp Catalogue for Korea’s listings, turning pages until I landed on the stamps of the Democratic People’s Republic of Korea (North Korea).

Bingo! There was the stamp, Scott 15, a North Korea Flag stamp issued in 1948. It took about an hour to work through the identification process, but it was worth doing because the stamp is now in the right album and mounted in the correct space.

Stamps of other Asian countries can be tricky to identify as well, but many of them have symbols on their stamps that help with recognition.

Japan, for example, used the image of the chrysanthemum shown on the imperial crest on its earliest stamps. In the second illustration here, Japan Scott 152 issued in 1916, the chrysanthemum is above the vignette, which shows a Mandarin duck. Another clue lies in the bottom-right corner: the inscription “Sn” refers to the Japanese currency “sen” for the stamp’s denomination.

Japan’s chrysanthemum imperial crest was used on stamps of Burma issued during the Japanese occupation of that country. It appears above the Diamond Mountains on a stamp from Japan surcharged for use in Burma in 1942 (Burma Scott 2N8).

Later occupation stamps also are difficult to identify, such as the stamp showing a Burmese girl carrying a water jug, issued in 1943, with inscriptions in Japanese and Burmese (Burma Scott 2N41).

Malaya also was occupied by Japan, and occupation stamps were issued, superseding Malaya issues. One of the 1943 occupation stamps is shown here, illustrating the tapping of a rubber tree, an important crop in Malaya (Malaya Scott N35).

Prior to World War II (or perhaps part of the prelude to that war), North China’s Manchuria was seized by Japan and converted into a Japanese puppet state in 1932. The former Manchuria became Manchukuo and stamps were issued for this new entity. A Manchukuo stamp showing a pagoda (Scott 1) was issued in 1932. The inscription at the top reads “Manchu State Postal Administration.” A helpful clue to identifying Manchukuo stamps is the currency in fen, a unit of Japanese currency.

West of Manchuria is Mongolia, whose first stamps, issued in 1924, did not have the country’s name. Instead, Vajra of Indra (or the Scepter of Indra) was selected to represent the nation. Vajra is a war club and Indra a god of heaven in Buddhism. Two years later, “Mongolia” began to be spelled out on the stamps in the European alphabet, changing in 1943 to the Cyrillic alphabet.

Northwest of Mongolia lies Tannu Tuva, currently a non-sovereign nation known as the Tuvan People’s Republic. From 1921 to 1944, it was an independent state within Imperial Russia.

In 1926, Tannu Tuva began issuing stamps whose validity sometimes was not recognized by all stamp collectors.

Later Tannu Tuva stamps were in unusual shapes for that time in stamp history — triangles, four-sided polygons, and so on — with amazing images of the country’s people, animals, and maps.

The earliest stamps of the Philippines might leave you scratching your head. The very first Philippines stamp, from 1854, shows the image of Queen Isabella II. With no country name in sight, you might reasonably guess that the stamp is from Spain, where Isabella was the monarch from 1833-68. And you would be partly correct, because the stamp was issued for the Philippines when the islands were under Spain’s dominion.

The wording at the bottom of this stamp says “FRANCO 5c.” The word “franco” may lead you to believe that the stamp is from a country using currency that includes the franc, and that the inscription across the bottom is the denomination. You would be partly correct: yes, the denomination is at the foot of the stamp design, but it is 5 cuartos, and “FRANCO” is Spanish for “frank” indicating this is a stamp for postage. Spanish stamps of that time carried the same “franco” reference.

The first stamp of Siam (now known as Thailand), issued in 1883, bears the image of King Chulalongkorn (Thailand Scott 1). You might recognize his name as the young crown prince in the musical stage play and film, The King and I.

Unless you happen to recognize the real Chulalongkorn on the stamp as being the king of Siam, you probably won’t get any help identifying the stamp otherwise, though the name “Siam” does appear in the Thai language at the top of the stamp. If you see enough Siam stamps, in time you actually might come to recognize Chulalongkorn himself, because his image appears on numerous issues.

China’s earliest stamps, beginning in 1878, clearly (and helpfully) carry the word “CHINA.” Many of its modern stamps do as well.

Some early stamps of China can be identified by the common image of a sunburst within a circle. A 1936 $1 China stamp that depicts a lighthouse with a typical sunburst above (Scott 334) is pictured with the column.

Most collectors who are not China specialists have difficulty with identifying the numerous surcharges and overprints, but there are books published by the China Stamp Society that can help with that.

As with any learning experience, identifying stamps of Asia becomes easier with repetition that trains the eye and reinforces understanding. The more stamps you see, the more you will get used to the unusual languages and symbols.