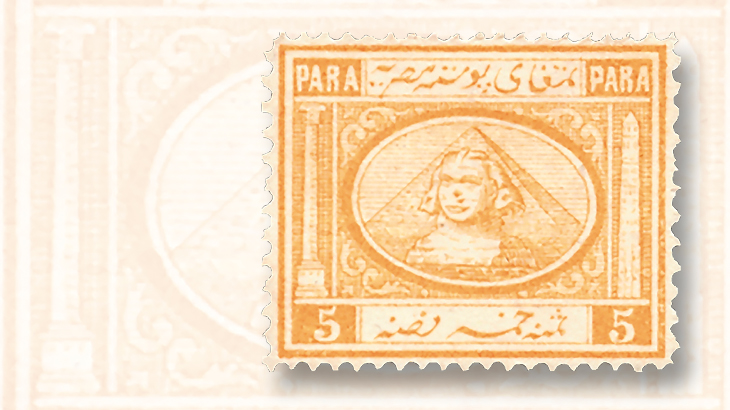 This stamp has no country name, but no country other than Egypt has the Sphinx with a pyramid in the background. 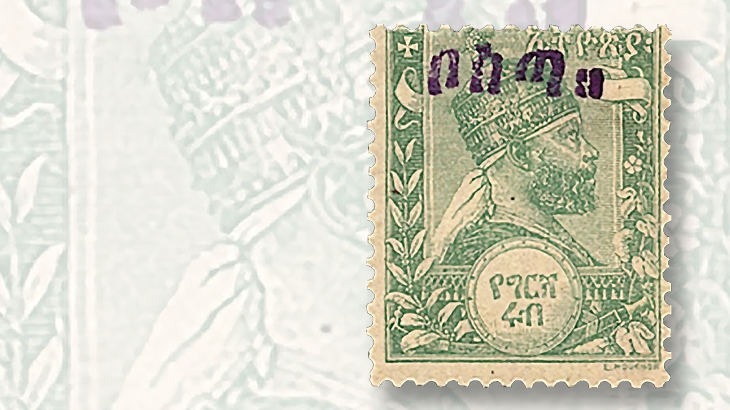 The overprint is in the Semitic language called Ge’ez, and the portrait is of Emperor Melenik II, ruler of Ethiopia, where this stamp is from. 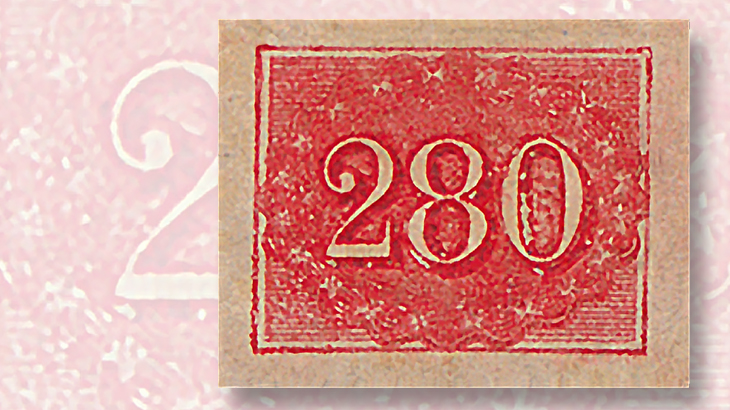 Following Brazil’s Bull’s-eye stamps are the smaller Goat’s-eyes, again with only a numeral and no country name. 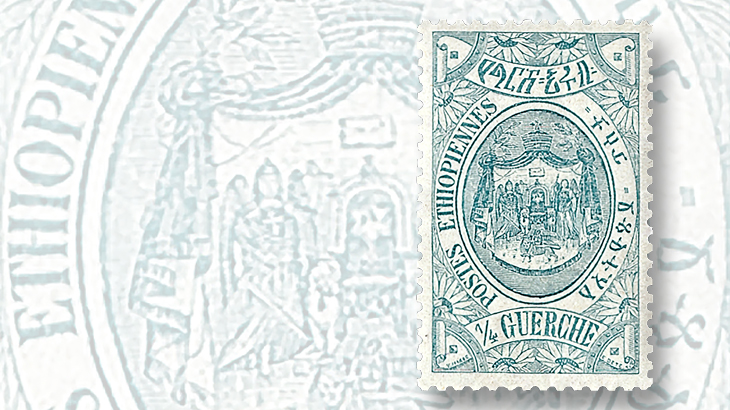 This 1909 stamp carries the French “Ethiopiennes,” identifying it as from Ethiopia. 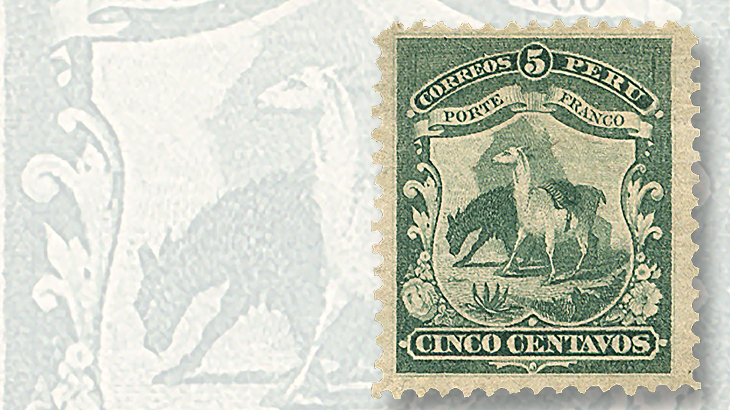 Not until 1866 did Peru issue stamps with the country name, and a design showing llamas. 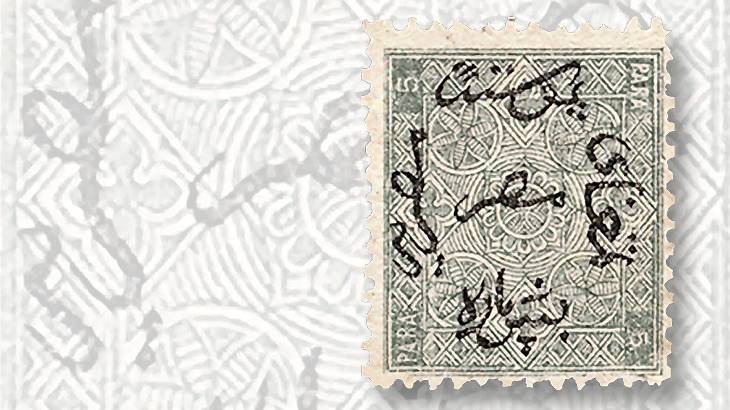 The Turkish currency of “para” hints at this stamp’s origin, but it was issued for use in Egypt when it was a Turkish Suzerainty in 1866. 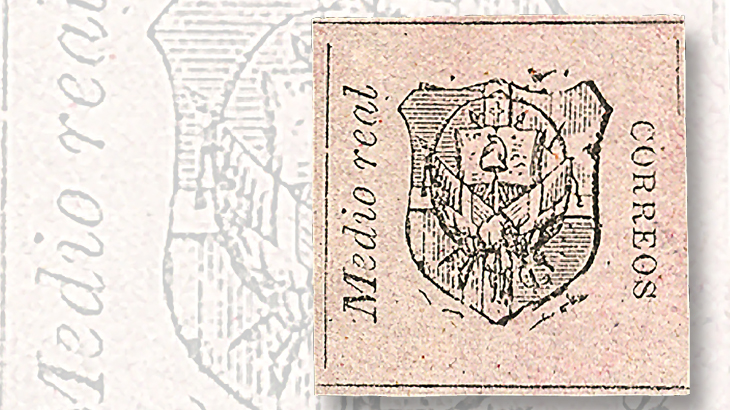 The national coat of arms is the only clue that this stamp is from the Dominican Republic. It is the nation’s first stamp, from 1865. 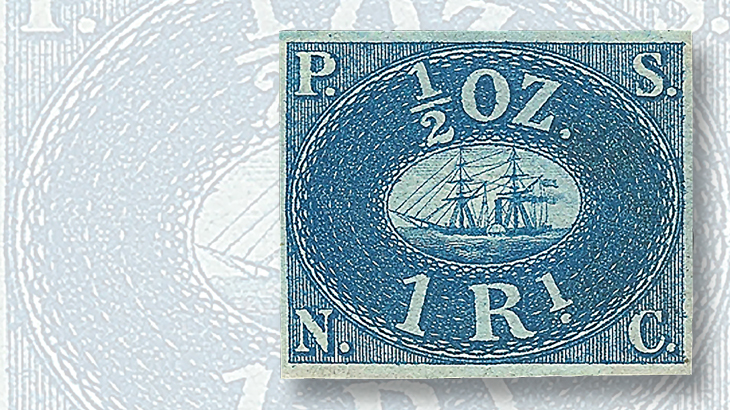 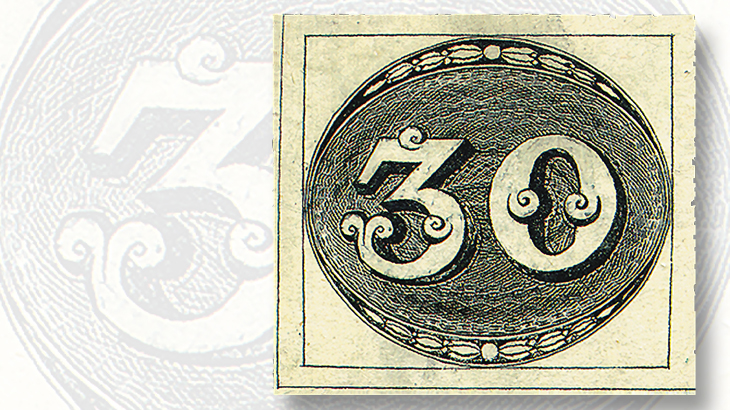 One of Brazil’s first three stamps, of 1843, known as the Bull’s-eyes. The stamps in this issue do not have a country name printed on them.
Previous
Next

Examples of stamps from Europe and Asia that do not have country names were addressed in previous Stamp Collecting Basics columns (March 21 and April 4 issues of Linn’s).

Fewer stamps were issued without a country name from the Americas and Africa, and these two continents will be discussed in this column, beginning with the stamp in the first illustration.

This 30-reis stamp is the first of the three stamps of 1843 that make up the first issue of Brazil (Scott 1-3) nicknamed the Bull’s-eyes.

Similar but smaller stamps from Brazil issued from 1844 until 1866 have been dubbed Goat’s-eyes. One of these, a 280r stamp (Scott 39) issued in 1861, is shown in the second illustration.

These early Brazil stamps can be difficult to identify, as they lack not only a country name but also any currency name that might give a clue to origin, having only a denomination numeral.

Eventually, in 1866, Brazil began identifying itself, issuing a handsome set of stamps with the image of Emperor Dom Pedro II and a bold ribbon containing “Brazil” above his portrait.

A stamp with a coat of arms and Spanish words on the left and right sides is shown in the third image. If you have been studying countries’ coats of arms (you can find illustrations by entering “coat of arms worldwide” in your favorite online search engine), you might have figured out this stamp came from the Dominican Republic: Scott 1, issued in 1865.

Not until 1879 did the Dominican Republic issue its first stamp that included the country’s name.

The attractive blue stamp shown in the fourth illustration displays the vignette of a ship, with a denomination of 1 “rl” (for real), and “½ oz.” indicating that the stamp paid the rate for mail weighing no more than that amount.

So where is this stamp from?

The initials in the four corners are clues: “P.S.N.C.” stands for Pacific Steam Navigation Co., and this denomination of stamp and a second different one were produced beginning in 1847 for the company’s use on its mail-carrying steam vessels.

In 1857, wanting to start a national postal service, the Republic of Peru asked the PSNC to donate some of its remaining stamp stock, for use until the republic could produce its own issues.

On March 1, 1858, Peru’s new national postal service issued its first stamps, showing a coat of arms but no country name. It took until 1866 for “Peru” to appear on stamps with an image of llamas (Scott 16).

Moving from the Americas to Africa, we find other nations whose stamps lack country names.

Seeing the stamp in the sixth image, it would be quite easy to make a wrong guess as to the source country. The Middle-Eastern overprints are on stamps that have denominations listed in “para,” and that little currency clue might lead you to the Ottoman Empire.

As it happens, this early stamp was issued when what we now know as Egypt was a Turkish suzerainty, meaning that Turkey was the predominant controlling nation within Egyptian territory. Thus, the first stamps of Egypt were issued by the Turks.

The following year, Egypt’s stamps still failed to be inscribed with the country’s name, but the post office supplied an excellent identifier by using the image of two of its unique and best-known landmarks: the Great Sphinx of Giza with the Pyramid of Khufu in the background.

It’s something of an understatement to say that the early stamps of Ethiopia are difficult to identify.

The attractive designs catch your eye, but it is unlikely you will have knowledge of the Ge’ez alphabet that appears on the stamps and overprints. Ge’ez is a Semitic language that is used in the liturgy of the Ethiopian church and also is one of the principal languages of the country.

The next-to-last illustration shows a stamp of Ethiopia (also known as Abyssinia) depicting Emperor Menelik II, overprinted with a word in the Ge’ez alphabet that says “bosta,” meaning post. The stamp is Scott 15, issued in 1902.

A stamp issued in 1909 is shown in the final illustration. It uses the European alphabet to refer to the issuing country in French as “Ethiopiennes.” The stamp is Ethiopia Scott 87, displaying an image of King Solomon’s Throne. The Ethiopian royal house traced its ancestry to King Solomon of Israel.

Certainly, there are many other stamps in addition to those mentioned in this column, and the two preceding ones, that do not carry the issuing country’s name.

Sometimes a wild guess will bring a correct identification, but easier ways to determine the country of origin include trying the tips that have been mentioned here.

Acquiring a stamp identifier book also can be very helpful. Linn’s Stamp Identifier is quite useful, with many stamp illustrations, and lists of unfamiliar inscriptions. Another option is to consult the illustrated stamp identifier found in the back of the Scott Standard Postage Stamp Catalogue.