Stamps printed on colored papers can be intriguing to collect 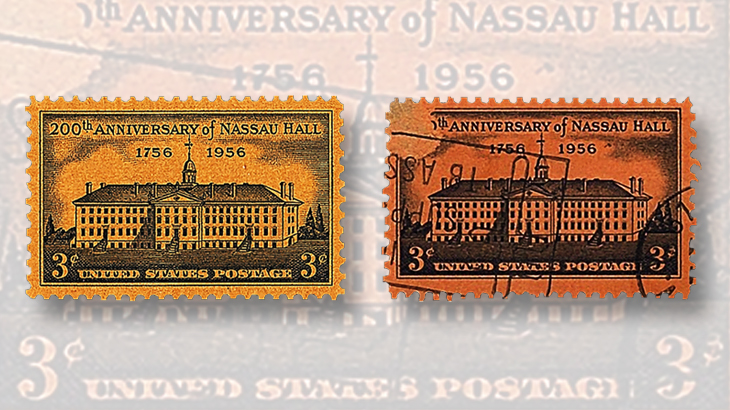 At left is an example of the first United States commemorative stamp on colored paper, the 1956 issue for Princeton’s Nassau Hall 200th anniversary. The scuffed example of this 3¢ stamp at right indicates that the orange color is in the paper itself. 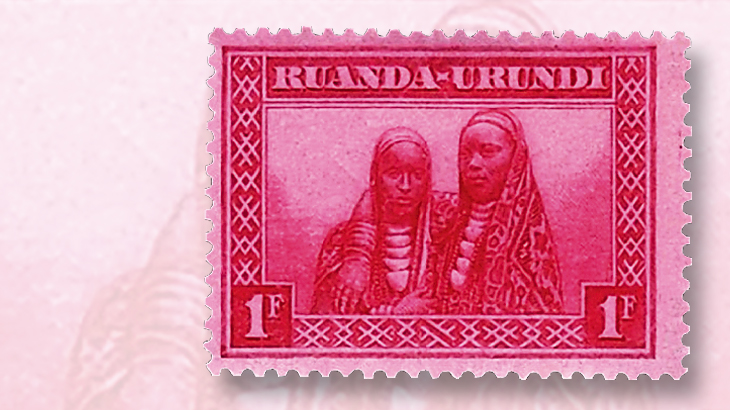 This 1931 stamp from Ruanda-Urundi was printed on white paper, but the rose-red printing ink tinted the paper. This tinting effect can happen when the paper is dampened before printing. 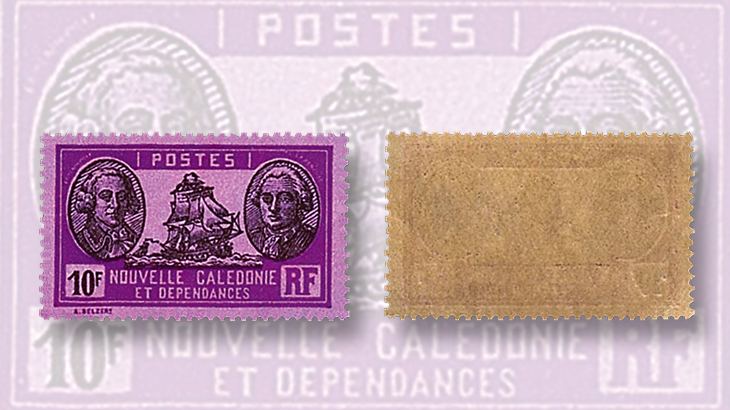 The New Caledonia stamp at left was printed on white paper tinted by the violet ink used to print the frame of the design. The back of the stamp proves the use of white paper for the stamp, visible on the perforation edges. 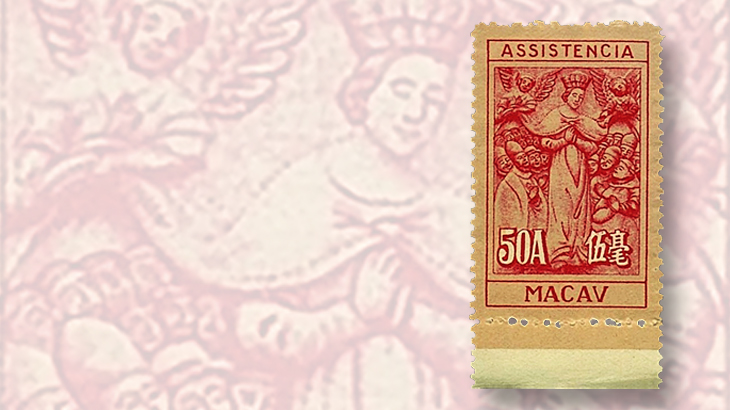 This Macao charity postal tax stamp was printed on white paper with printed background color. This combination is visible on the bottom selvage. The stamp was issued in 1945. 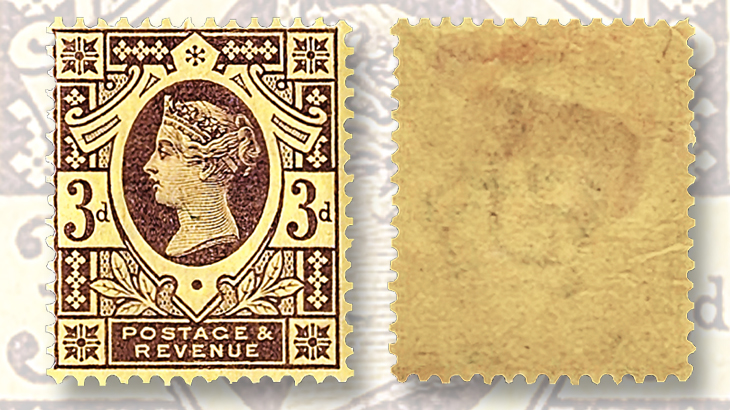 Great Britain Scott 115, the 3-penny denomination from the 1887 Queen Victoria Jubilee set, was printed on yellow paper, as seen at right on the back of one of the stamps. 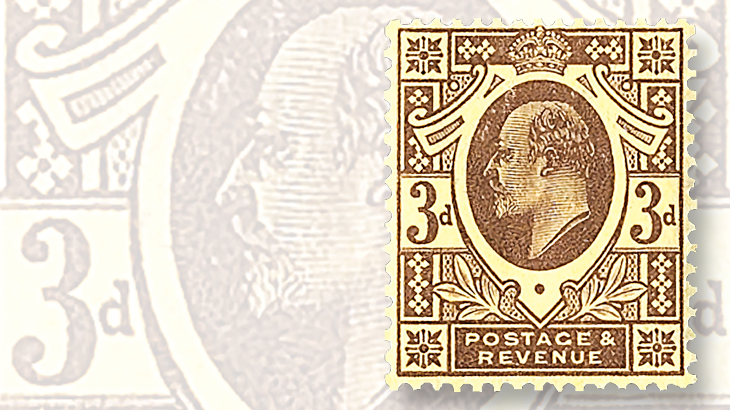 The Great Britain 3-penny 1902 stamp depicting King Edward VII was printed in dull purple ink on orange-yellow paper, resulting in a stamp that looks like it was printed in brown ink.
Previous
Next

If you have been collecting stamps for a while, you will have noticed that most of them are printed on white paper.

Every once in a while, however, you might find a stamp that seems to have been printed on colored paper, and this makes it stand out among the other stamps that live in your stamp albums.

Collectors sometimes erroneously identify a stamp as being printed on colored paper, when actually the stamp in question may have been printed on regular white paper that was dampened before going into the press. The ink then was likely to bleed a bit on the wet paper during printing, resulting in the paper becoming lightly tinted.

An example of this effect is shown in the first illustration here: a 1-franc stamp from Ruanda-Urundi issued in 1931 (Scott 45), showing Barundi women. The stamp was printed on white paper in rose-red ink that lightly tinted the paper.

The second illustration shows a stamp that appears to have been printed on colored paper. The 10-franc stamp is from New Caledonia (Scott 174) and was issued in 1928. The Scott Standard Postage Stamp Catalogue lists this stamp as printed in violet for the frame and brown for the vignette with pinkish background.

If you turn over that New Caledonia stamp, a close look at the perforation edges reveals that the paper is white. The pinkish color is the result of the violet ink that tinted the stamp.

The Macao stamp shown here is an example of that method. It is a postal tax stamp issued in 1945 (Scott RA10) showing a religious design symbolizing charity.

In 1956, the first United States commemorative stamp to be issued on colored paper (Scott 1083) celebrated the 200th anniversary of Nassau Hall at Princeton University. An example of this 3¢ stamp is shown here — black ink on orange paper, representing Princeton’s school colors — along with a damaged example of the same stamp.

In 1887, Great Britain issued 12 stamps for Queen Victoria’s Jubilee, celebrating the 50th anniversary of her accession to the throne. Three of the denominations of the set were printed on colored papers: the 2½-penny on blue paper (Scott 114), the 3d stamp on yellow paper (115), and the 6d stamp on rose paper (119).

An example of the 3d stamp printed in violet on yellow paper is shown here, front and back. If you have ever mixed colors, you might remember that combining violet with yellow will yield brown, and that is why the queen’s image on the yellow paper looks brown.

The back of that same 3d stamp shows that the paper upon which the stamp was printed was definitely yellow itself, and not merely printed yellow.

Stamps of a design similar to the Jubilee issue but showing King Edward VII were issued beginning in 1902. The 3d denomination (Scott 132), was printed in dull purple on orange-yellow paper. An example is shown in the last illustration.

It is fun to look through your collection for stamps printed on colored paper, or those that seem to be so, and identify which is which.

And be sure to watch for stamps that were unintentionally printed on colored papers — they just might be valuable.