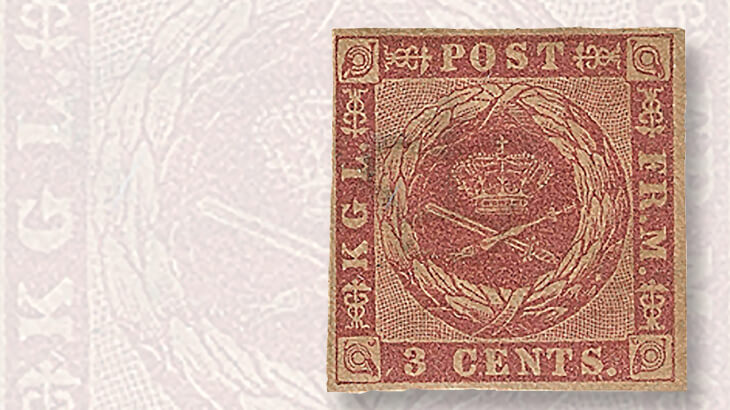 The 1856 first issue of Danish West Indies depicts the Danish coat of arms. 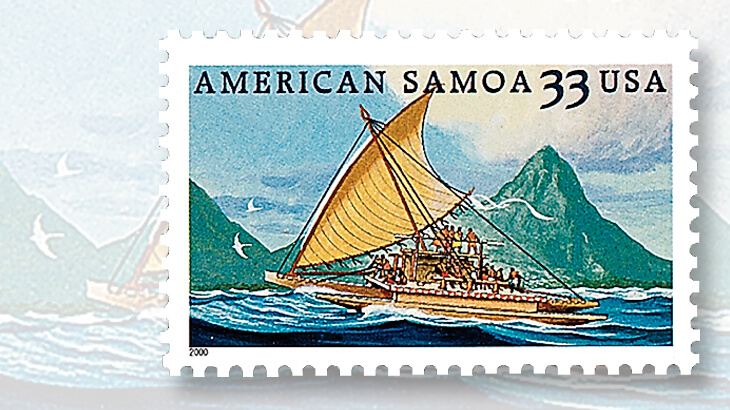 A 2000 U.S. 33¢ stamp features an outrigger sailing vessel in the waters off American Samoa, with volcanic peaks in the background. 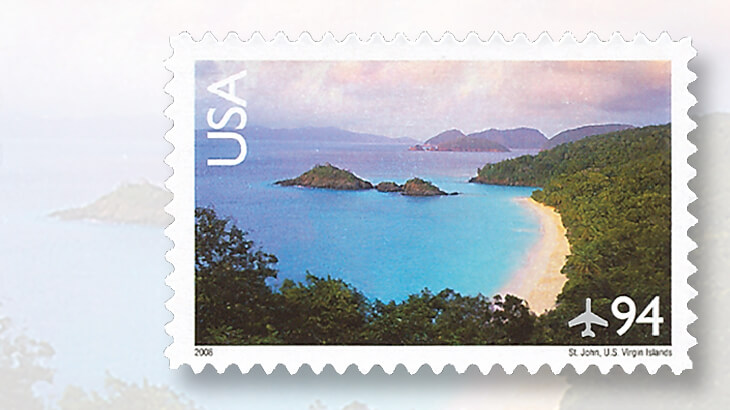 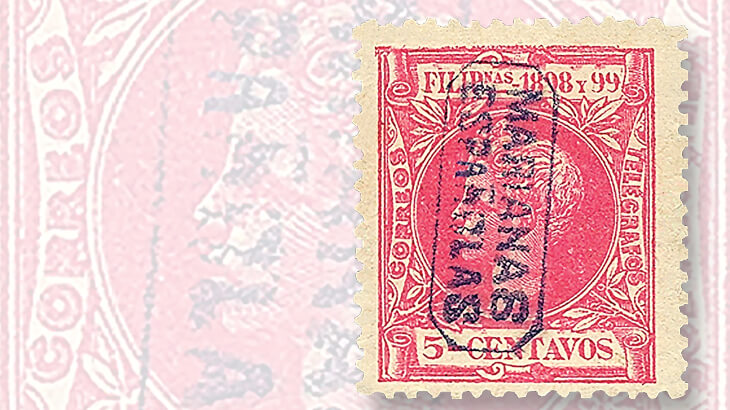 In 1899, Spain issued Philippines stamps overprinted for use in the Mariana Islands in the Pacific. 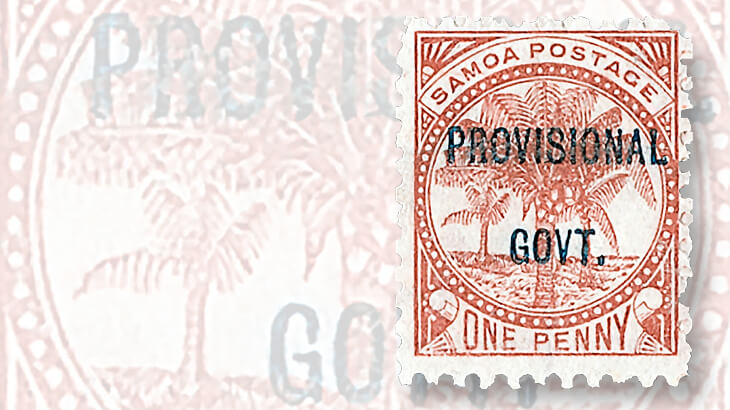 While the United States was negotiating a treaty to acquire Samoa in 1899, the country’s stamps were overprinted reading “PROVISIONAL GOVT.” 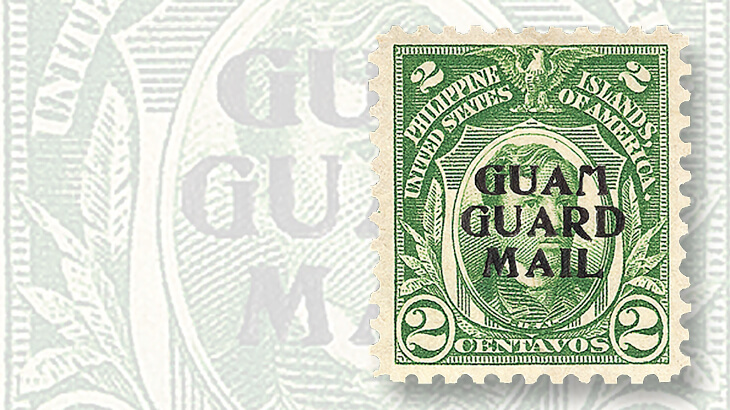 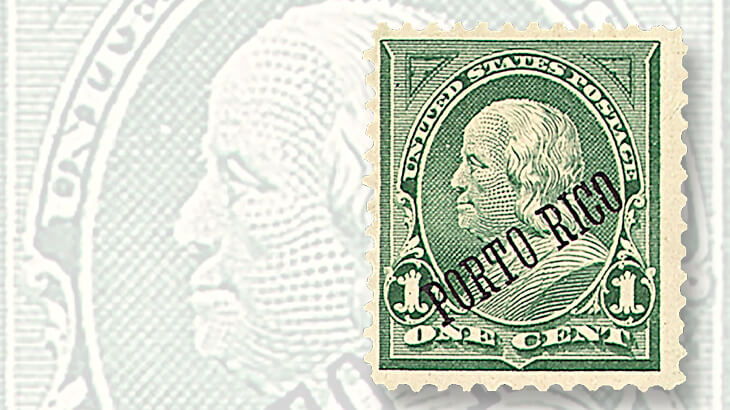 As of 1899, United States stamps overprinted “PORTO RICO” came into use. 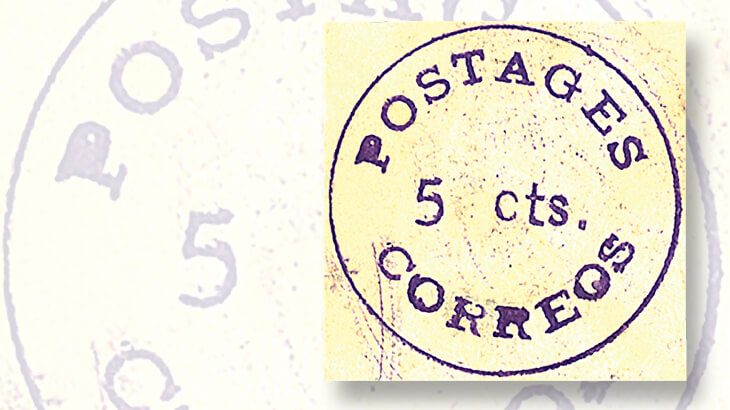 Puerto Rico Scott 200 is a handstamped provisional marking used in 1898 and found only on cover. 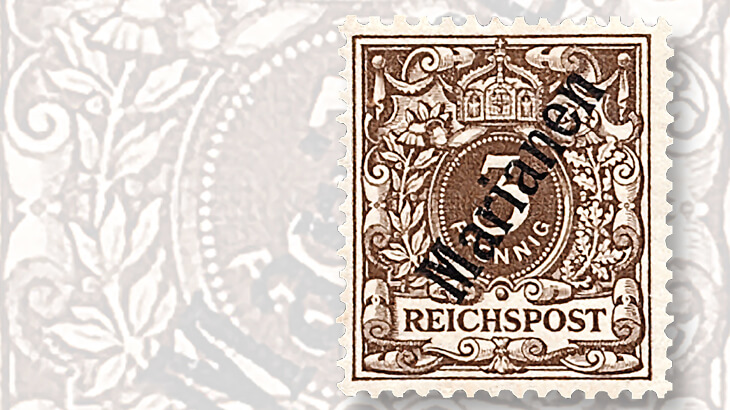 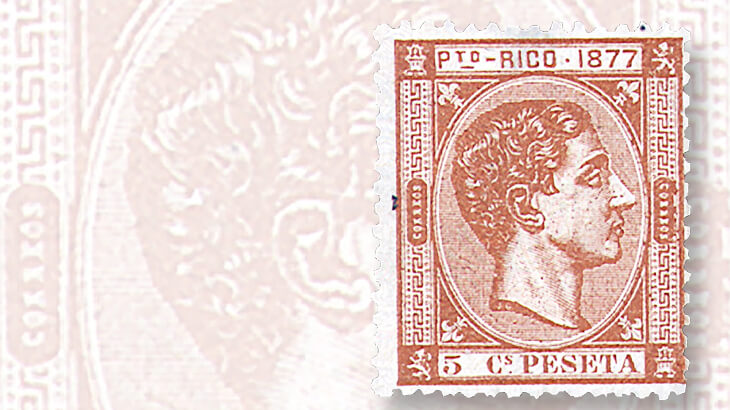 Stamps of Spain, Cuba and Great Britain were used in Puerto Rico at different times between 1855-73. This 1877 stamp depicts King Alfonso XII. 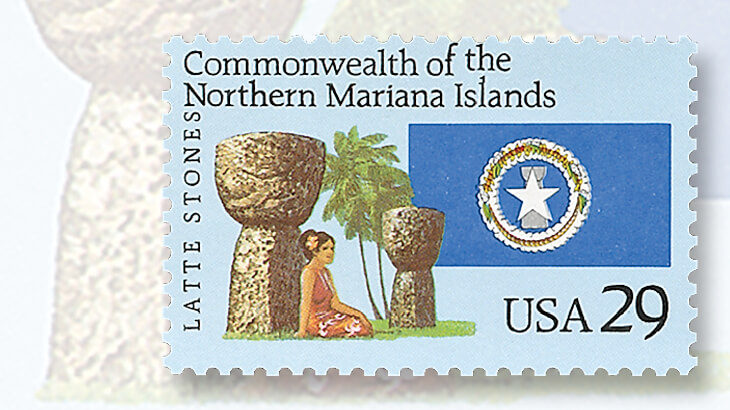 The flag of the Northern Mariana Islands and an ancient Chamorro stone pillar called a latte appear on a U.S. 29¢ stamp issued in 1993. 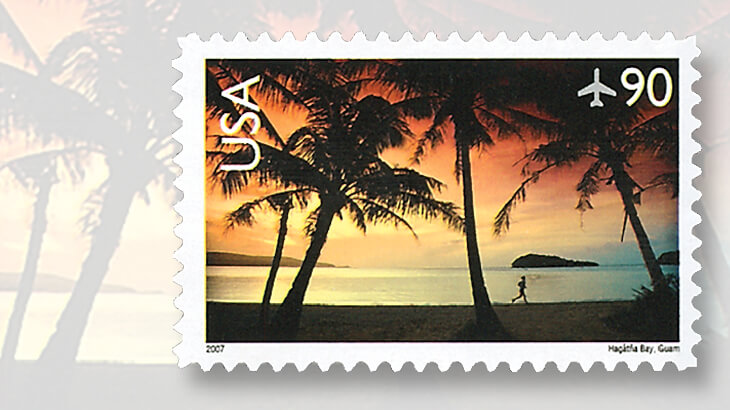 Hagatna Bay, near Guam’s capital of Hagatna, on a 2008 U.S. airmail stamp. 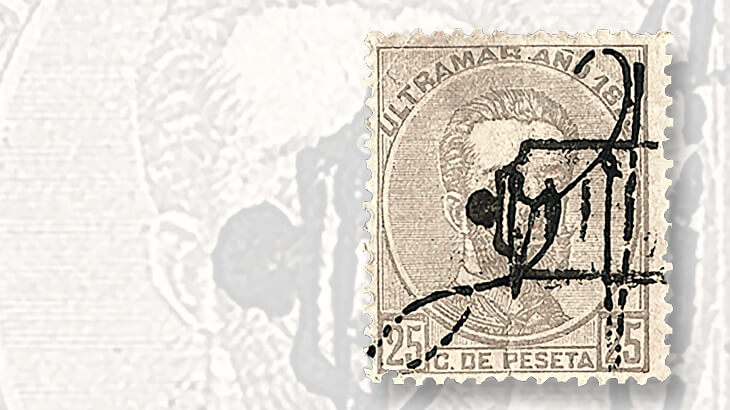 The first stamp issue of Puerto Rico consisted of overprinted stamps of Cuba. 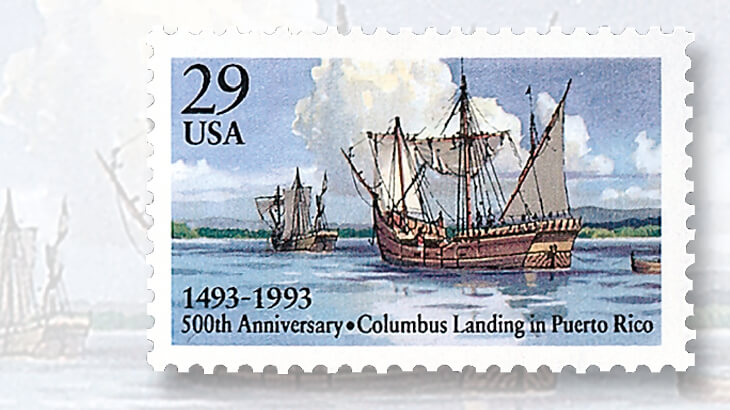 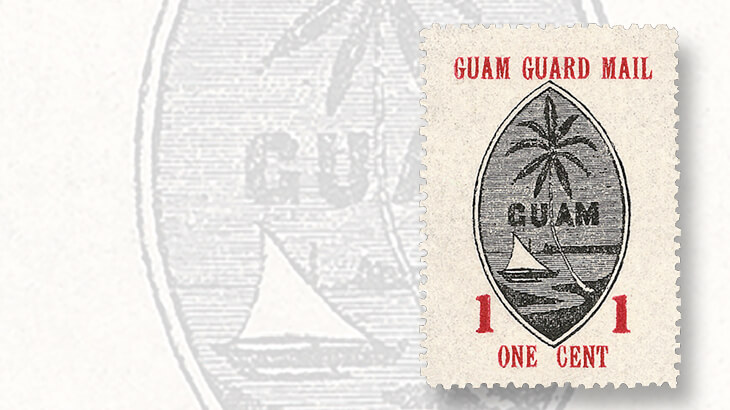 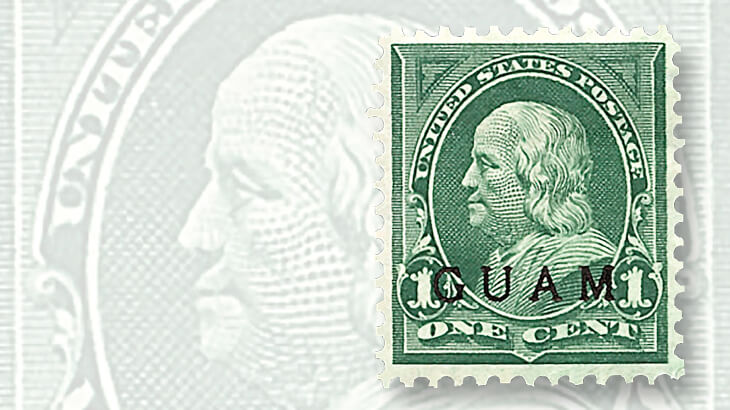 Guam’s first issue, in 1899, was a United States stamp overprinted with the territory’s name.
Previous
Next

If you have ever watched “man on the street” interviews on television or elsewhere, you may have noticed that when the questions pertain to geography, the man (or woman) on the street is likely to be clueless.

Stamp collectors, in contrast, have an enormous advantage in geographical skills, and probably even know that, in addition to 50 states, the United States of America also has 16 holdings that are territories or commonwealths.

Only five of them are inhabited — can you name them? Do you know how they became U.S. holdings? And, more to the point, do you know if they issue their own postage stamps?

Let’s let history and philately help to answer these questions.

Puerto Rico and the Northern Mariana Islands originally were simply territories but now are commonwealths, which is a legal and political status above a territory but below a state. American Samoa, Guam and the U.S. Virgin Islands are territories.

Puerto Rico in the Caribbean and Guam in the Pacific Ocean are halfway around the world from each other, but both islands share a piece of history.

Puerto Rico and Guam both became U.S. territories in 1898. At that time, following the Spanish-American War, Spain ceded Guam and Puerto Rico to the United States by a treaty signed in Paris on Dec. 10, 1898.

Puerto Rico had been under Spanish control beginning in 1508, when explorer Ponce de Leon appropriated the island for Spain.

Stamps of Cuba, Spain and Great Britain were used in Puerto Rico between 1855 and 1873, and then what is considered Puerto Rico’s first stamp, Scott 1, was issued: It is shown here, an issue of Cuba overprinted for use in Puerto Rico.

Four years later, Spain’s King Alfonso XII appeared on stamps specifically made for Puerto Rico; Scott 13 of 1877 is pictured here. Spanish-dominion stamps for Puerto Rico continued until 1898, when the island became a U.S. territory thanks to the previously mentioned treaty of 1898. A provisional handstamp was used on envelopes in 1898. This stamp, Puerto Rico Scott 200, is known only as a handstamped marking on cover.

A change in the overprint was made in 1900 to reflect the new spelling of the island’s name, “Puerto Rico.” These were the last overprinted U.S. stamps for Puerto Rico. Thereafter, U.S. stamps were and still are used in Puerto Rico.

Occasionally, the U.S. Postal Service issues stamps that honor U.S. territories. A 29¢ stamp (Scott 2805) was issued in 1993 to commemorate the 500th anniversary of the landing of Christopher Columbus in Puerto Rico.

Guam, like Puerto Rico, has a Spanish heritage and became a U.S. territory in 1898, but Guam can trace its history back much farther, to early Micronesian peoples. Spain claimed the island in 1565, and then ceded Guam to the United States after the Spanish-American War of 1898.

Before becoming a U.S. territory, Guam used Spanish Philippine stamps. Once Guam became a territory, U.S. stamps were overprinted “GUAM” for use there, such as the 1¢ Franklin stamp (Guam Scott 1) issued in 1899.

In 1930, the governor of Guam established a local post to deliver letters between the island’s towns and villages. Initially, Philippine stamps were overprinted “GUAM GUARD MAIL.” Scott M1, an overprinted 2-centavo green stamp, is illustrated here.

The United States engineered a treaty with Great Britain and Germany in 1899 and got the eastern islands of Samoa, which had become a strategically important port. Even today there are U.S. military bases in American Samoa.

While the treaty was being hammered out, Samoa stamps were being overprinted “Provisional Govt.,” as shown in the illustration of Samoa Scott 32. Thereafter, the eastern islands were named American Samoa, a U.S. land holding, with U.S. stamps used there.

A 33¢ U.S. stamp honoring American Samoa was issued in 2000 (Scott 3389) showing an outrigger sailboat against a background of volcanic peaks.

Meanwhile, back to the Caribbean in 1917, the United States purchased the three islands of the Danish West Indies colony from Denmark for $25 million. Like American Samoa, these islands were of strategic importance, and there are still U.S. military bases there.

After the purchase, the former Danish West Indies were renamed the U.S. Virgin Islands, comprising St. Thomas, St. John and St. Croix. The first Danish West Indies stamps were issued in 1856. Scott 1 has a coat-of-arms design similar to some early stamps of Denmark.

Now, back to the Pacific Ocean to find the newest U.S. holding: the Northern Mariana Islands, which became a territory in 1975. The Marianas consist of 22 islands and islets, but only five are inhabited: Saipan, Rota, Tinian, Anatahan, and Alamagan.

Spain colonized these islands in 1668, but in the 19th century both Germany and Great Britain attempted to take over some of the islands. Spain issued Philippine stamps overprinted for use in the Mariana Islands shortly before exiting the Pacific entirely in 1899. Germany jumped in, bringing along some overprinted German stamps, such as the 10-pfennig stamp shown here, overprinted “MARIANEN” and issued in 1899 (Mariana Islands Scott 13).

There have been many territories of the United States, some of which, such as Hawaii and Alaska, have become states, and some of the remaining ones may yet reach statehood.

Tracing the stamps used throughout the history of present and former U.S. land holdings can add an interesting angle to your U.S. collection.

Who's in charge here? Postage stamps reflect changes in government