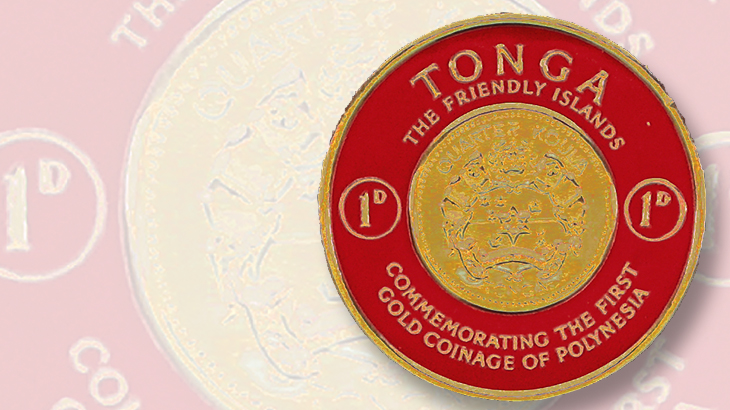 Tonga is a good candidate for meeting the criteria of issuing “exotic” stamps, including this foil-embossed coin-like stamp of 1963. 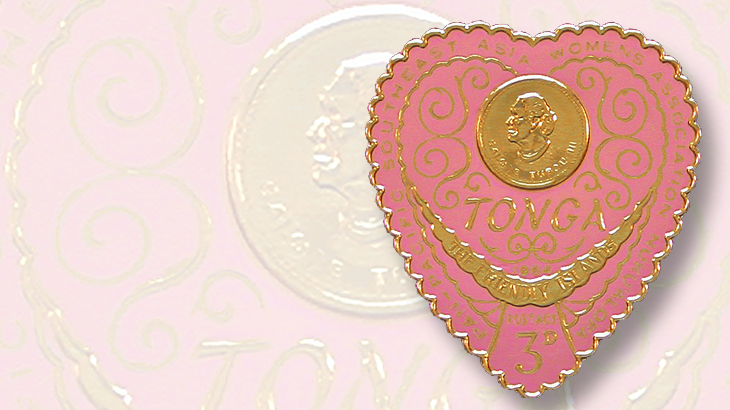 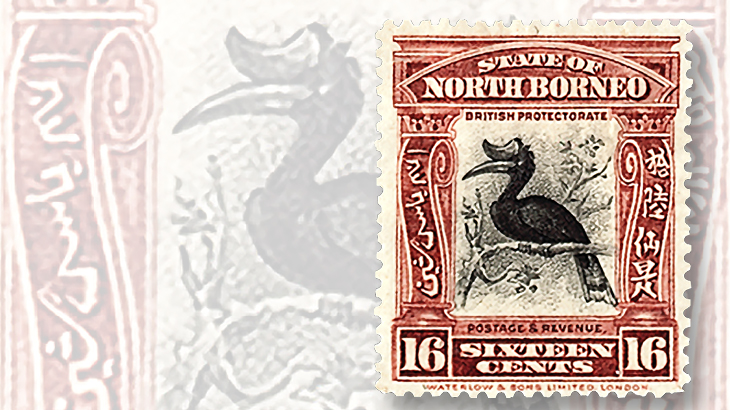 A rhinoceros hornbill surely qualifies as an exotic species. The bird is shown on this 16¢ stamp from North Borneo issued in 1909. 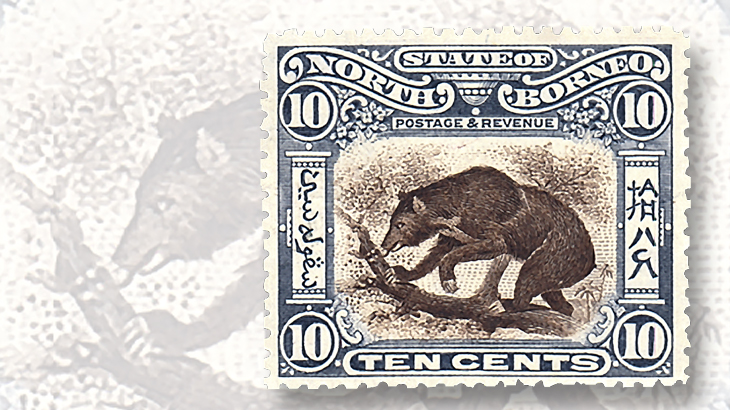 The image of a bruang, also known as the Malayan sun bear or honey bear, on this 1902 North Borneo stamp gives it an exotic aspect. 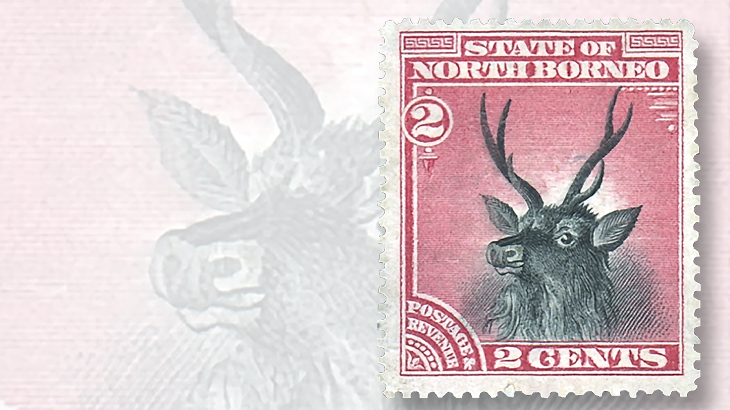 This 1894 2¢ stamp from North Borneo, picturing a Malayan sambar, might qualify as an “exotic” stamp, because it is from a distant country and shows an unusual creature. 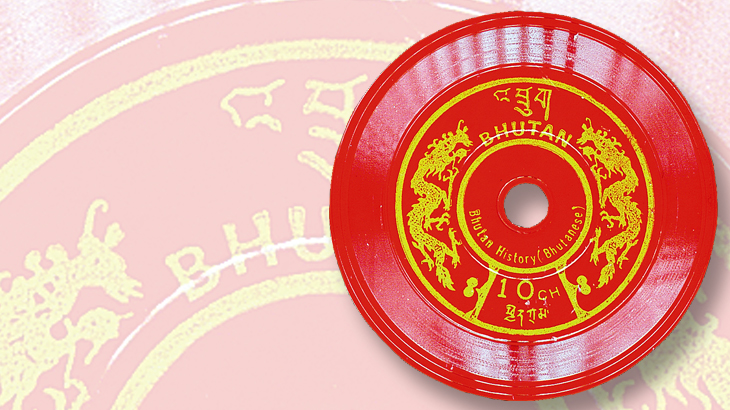 One of Bhutan’s famous phonograph record stamps of 1973, the 10-chetrum denomination, plays information about the country’s history. The stamp is one of a set of seven stamps. 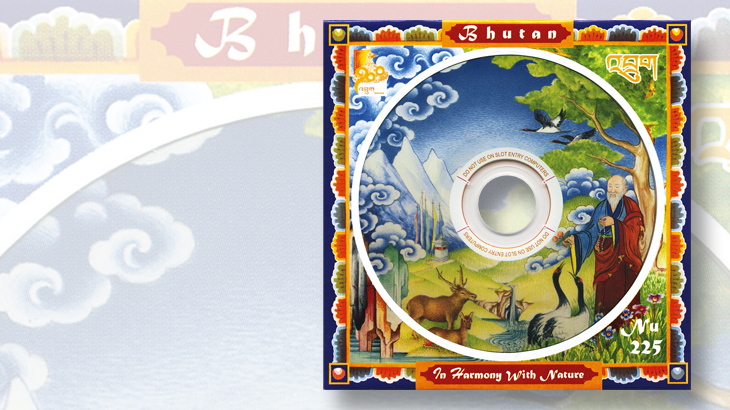 In 2008, Bhutan revisited the idea of its phonograph record stamps with new issues containing compact discs, including this one with a nature theme titled In Harmony With Nature. 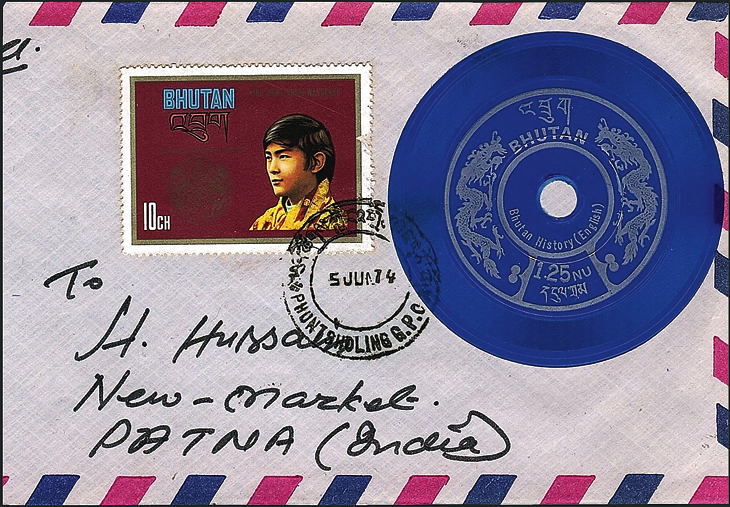 The 1.25nu phonograph-record stamp of 1974, which plays a recording about Bhutan history in English, is accompanied on this cover by a stamp showing King Jigme Singye Wangchuk. 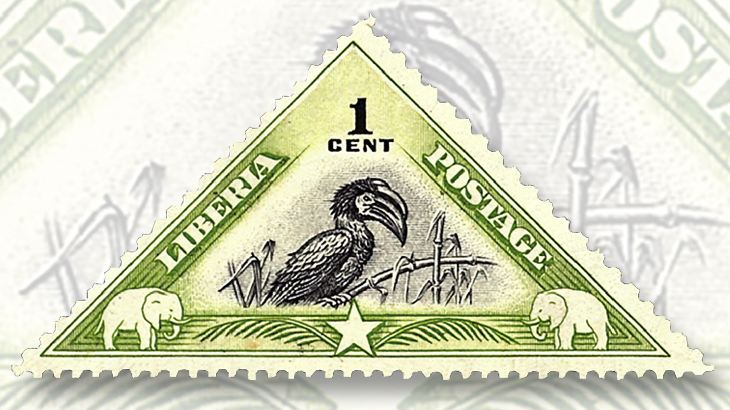 Over the years, many young collectors, including the author, have been intrigued by this set of 1937 Liberia triangular stamps.
Previous
Next

The Oxford English Dictionary provides these definitions for “exotic”: 1. Originating in or typical of a distant foreign country. 2. Strikingly colorful or unusual.

Let’s face it: Some of the stamps in our albums are mundane in appearance and others are breathtaking. But how many people have been converted to the stamp-collecting hobby simply because of the image of an exotic stamp? Probably thousands, and each one may have a different idea of what constitutes “exotic.”

Using the two Oxford English Dictionary definitions of exotic, the first bookmarked example in your album could be North Borneo’s beautifully engraved bicolor stamps issued from 1894-1939. The stamps are teeming with exotic animals living in an exotic country that is now a part of the Federation of Malaysia.

In 1894, North Borneo issued a 2¢ stamp (Scott 60) featuring a Malayan sambar with showy antlers, an animal that would meet anyone’s standard of exoticness. In 1897, the Sambar stamp was reissued, along with some other beautiful stamp images that also had first been issued in 1894.

Other exotic animals were added to the North Borneo stamp menagerie in 1899 and 1902. For example, a bruang (Malayan sun bear) appeared on a 1902 10¢ bicolor stamp (Scott 120). In 1909, North Borneo stamps featured other exotic creatures such as the rhinoceros hornbill (146) and the cassowary (149).

Most of these stamps fall within the realm of modest stamp budgets. Many of the animals shown on North Borneo stamps are now endangered, but thanks to their stamp images, we can enjoy them without leaving home or imposing on their habitats.

As a young collector in the 1950s, I remember receiving a set of triangular Liberia stamps issued in 1937. These issues had a trifecta: an exotic origin, exotic animals, and an exotic shape.

What other “distant foreign countries” also have “strikingly colorful or unusual” stamps? Tonga surely comes to mind. This Polynesian island kingdom in the South Pacific Ocean began issuing round stamps in 1963. The stamps were printed and embossed on foil that mimicked Tonga coins. The 1-penny coat-of-arms coin on Scott 128 is illustrated here.

The following year, a heart-shaped foil Tonga stamp was issued to honor the Pan-Pacific and Southeast Asia Women’s Association Conference. The coin image on the stamp (Scott 136) has a portrait of Tonga’s Queen Salote.

Tonga’s stamps have remained very exotic in design for decades, with all sorts of die-cut stamps depicting subjects from bananas and military medals to sailing ships and Boy Scout tents.

In 1973, Asia’s Bhutan pulled off one of the most exotic stamps the world had ever seen. The set of seven very unusual stamps (Scott 152, 152A-152F) included denominations from 10 chetrum to 9 ngultrum; the 10ch stamp is shown nearby.

Upon close inspection, you will discover that the stamps in this set are plastic phonograph records that can actually be played if you still have a stereo turntable. The 10ch stamp features a recording about Bhutanese history; other denominations play the Royal Bhutan anthem and folk songs.

A cover sent from Bhutan on June 5, 1974, is illustrated here. The 1.25nu stamp, if it were put on a phonograph, would play a history of Bhutan in English.

In 2008, Bhutan revisited the idea of the phonograph-record stamps but upgraded to the technology of the time. Two souvenir sheets (Scott 1430-1431) that actually were sealed envelopes containing compact discs were issued, one featuring five kings of Bhutan and the other called “In Harmony with Nature.”

Your opinion of what an exotic stamp should look like might be different from mine, but we all recognize “exotic” when we see it, and isn’t that part of the enjoyable diversity of collecting?