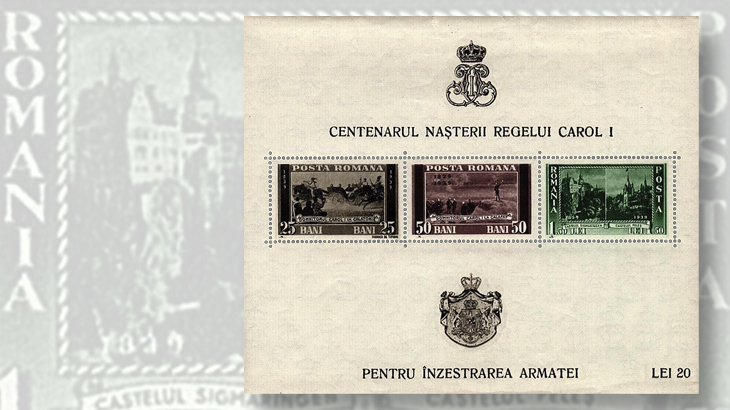 The centenary of the birth of King Carol I was celebrated with a souvenir sheet in 1939. 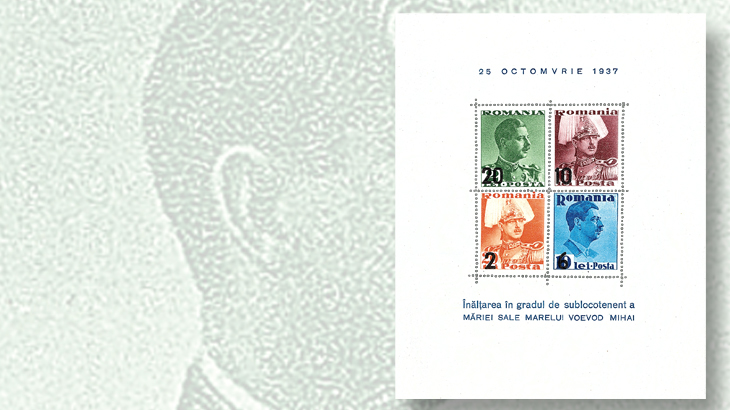 The first souvenir sheet of Romania, issued in 1937, announces that Crown Prince Michael will be promoted to lieutenant when he turns 17 (in 1938). The stamps show King Carol II. 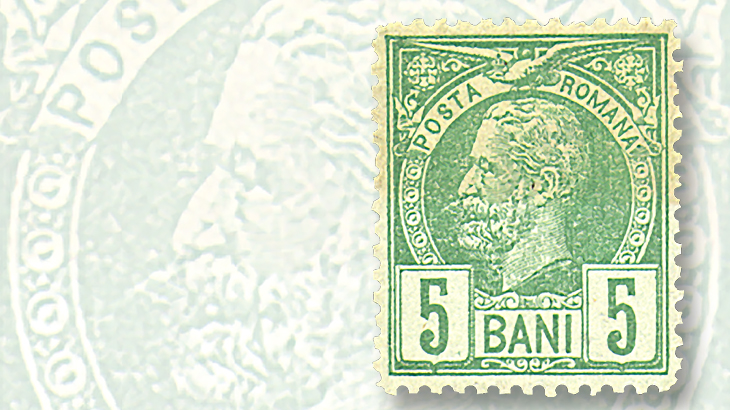 Prince Carol became King Carol I in 1881; the first stamp portraying him as king is Scott 73. 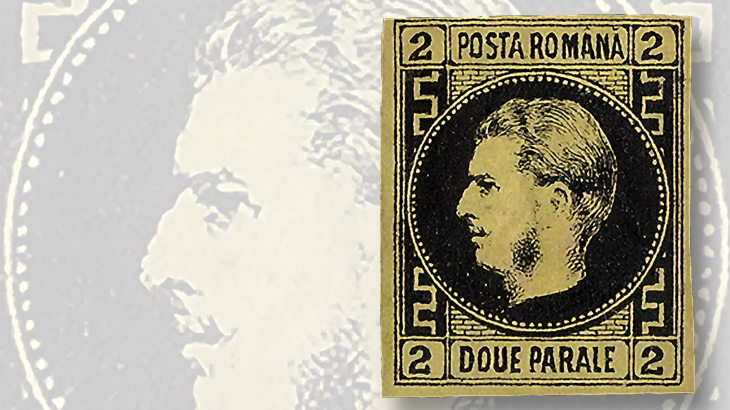 The first Romanian stamp portraying Prince Carol I was issued in 1866, the year he became ruler of the country.
Previous
Next

Following a nation’s history through its ordinary stamps is an easy and fun way to learn. Determining why a souvenir sheet was issued might be more of a challenge.

A souvenir sheet is a small individual page incorporating a stamp or a set of stamps. A large percentage of souvenir sheets are retained unused, as issued, by stamp collectors. This, of course, makes them potentially very profitable for postal administrations.

These little sheetlets are called souvenir sheets in the United States, but some other nations refer to them as minisheets.

Romania is one of the most prolific issuers of souvenir sheets, beginning in 1937 with one containing four surcharged stamps bearing the image of King Carol II (Scott 469).

The Scott Classic Specialized Catalogue of Stamps and Covers 1840-1940 describes the sheet as marking the “Promotion of the Crown Prince Michael to the rank of Lieutenant on his 17th birthday.” (An online translating site uses “second lieutenant” for the Romanian wording on the sheet.)

That is interesting, but why do the four stamp images show three different portraits of King Carol II, and none of Crown Prince Michael?

Attempting to answer that question was how I got lost in a Romanian souvenir sheet, and it took quite some time to find my way back out.

And why were there images of his father, King Carol II, instead of the young crown prince?

Carol married Joanna Lambrino Aug. 31, 1918. Their marriage was annulled, against the prince’s wishes, March 29, 1919, but the couple continued to live together. Their only child, Mircea Gregor Carol Lambrino, was born Jan. 8, 1920.

On March 10, 1921, Crown Prince Carol married his second cousin, Princess Helen of Greece and Denmark, and they became parents of their first and only child, Michael, on Oct. 25, 1921. The marriage collapsed after Carol eloped with his mistress, and in the ensuing scandal Carol renounced his right to the throne in favor of his son, who became Crown Prince Michael.

On July 20, 1927, King Ferdinand I died and the 6-year-old crown prince became King Michael I of Romania. His first reign lasted three years, until June 7, 1930, when Carol II returned, went back on his word about abdicating and reclaimed the throne from his son.

Well, this seemed like a true royal mess, enough so that other Romanian souvenir sheets started to become more intriguing.

Considering the complex tale of King Carol II and his son, Michael I, this 1939 sheetlet seemed worth investigating. The 25-ban stamp on the souvenir sheet shows a horse-drawn coach and military escorts, with the legend “Domnitorul Carol I In Calatorie.”  “Calatorie” means travel or journey in Romanian, and this scene echoes Romania Scott 177, part of a set issued in 1906 in honor of 40 years of Carol’s rule.

The design recalls Carol’s trip from Dusseldorf, through Switzerland and then his triumphant arrival in Bucharest on May 10, 1866, where he received the keys to the city and was crowned as domnitor.

The 50b stamp shows Prince Carol at the Battle of Calafat, the opening battle of the Russian-Turkish War in 1877 (this design is similar to Scott 178 in the 1906 set).

The 1.50-leu stamp in the 1939 sheetlet has two castle images: at left is Castle Sigmaringen in Germany, where Carol I was born as Prince Karl Eitel Friedrich Zephyrinus Ludwig of Hohenzollern-Sigmaringen, and on the right is Castle Peles in the Carpathian Mountains in Romania, a palace that Carol had built in a massive project between 1873-1914.

The top line on the 1939 souvenir sheet translates as “birth centenary of King Carol I” and the bottom line as “to equip army.”

The Scott Classic catalog notes that this 20-leu souvenir sheet was sold for 50 lei, with the surtax going to national defense.

Carol I married Elisabeth of Wied in 1869, and she gave birth in 1870 to a girl, Princess Maria, who died when she was 3 years old. There were no other children. King Carol’s heir apparent was his older brother Leopold, who renounced the right of succession to his son William. William also renounced the throne, in favor of his younger brother, who became King Ferdinand.

The changes in Carol I’s title are documented in stamps. Prince Carol I appeared on stamps issued in 1866 (Scott 29), where he is shown in profile on a 2-para stamp issued in the year he became ruler as prince/domnitor. In 1881, he became king, and thereafter he appeared on stamps as King Carol I, beginning with Scott 73.

The two souvenir sheets featured in this column supplied interesting information about the monarchs of Romania, after research effort on my part, and also prompted interest in digging for more data.

What happened to Michael I, for example? In 1947, he relinquished his throne under force from the Communist Party of Romania, and the country became a socialist republic.

The communist leader in Romania was overthrown in December 1989. The nation is now a constitutional republic with a democratic parliamentary system. At the time this column is being written, Michael I is 94 years old and undergoing treatment for leukemia.

It is amazing how much knowledge can be extracted from a couple of souvenir sheets.