To collect Martinique, begin and end with the stamps of France: Stamp Collecting Basics 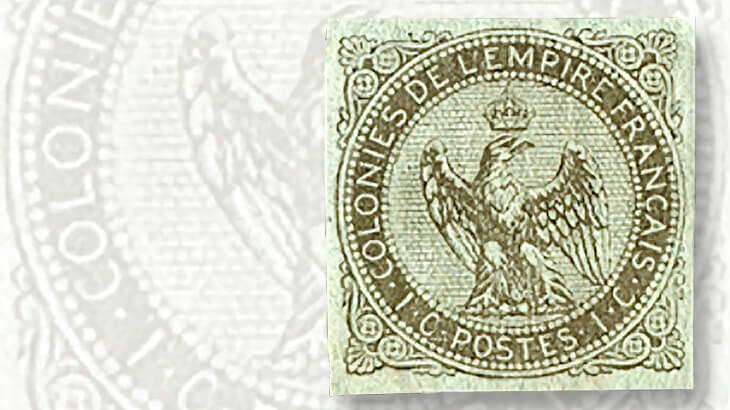 France began issuing stamps for its colonies, including Martinique, in 1859. This is the 1-centime stamp from a set of six denominations. 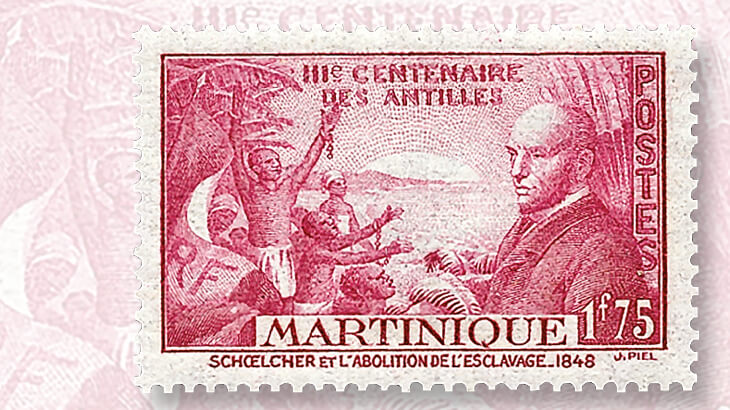 For the tercentenary of French possessions in the West Indies, in 1935, abolitionist Victor Schoelcher was shown with former slaves. 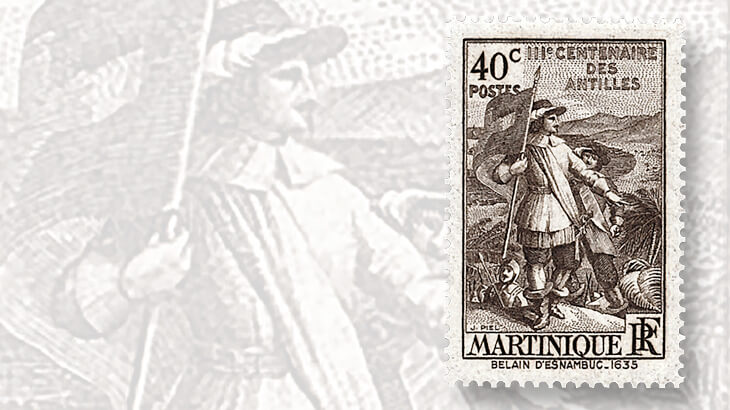 Pierre Belain d’Esnambuc established the first French colony on Martinique in 1635, and appears on a 1935 Martinique stamp. 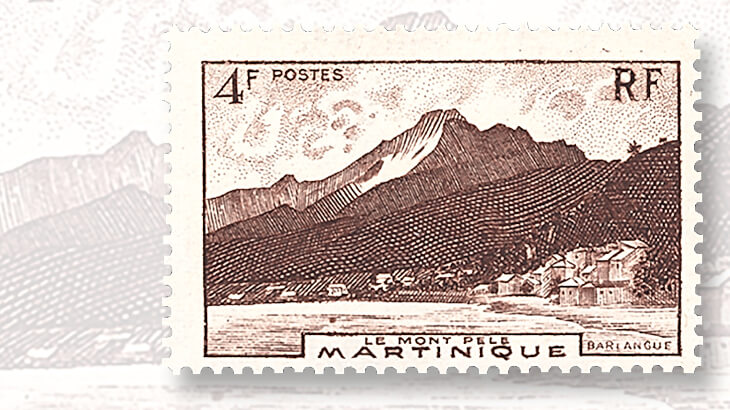 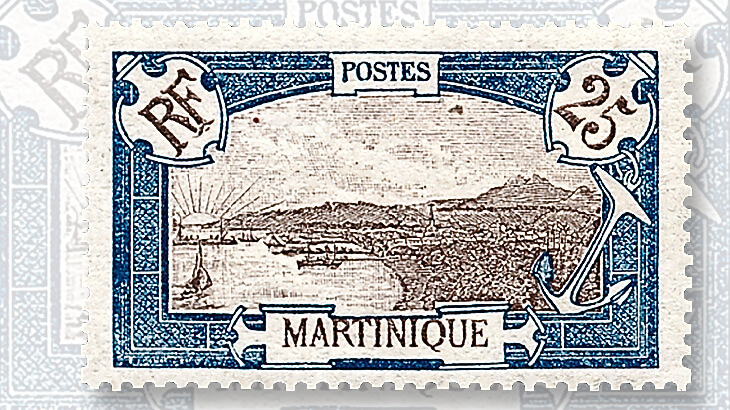 The 1908-1930 pictorial series of stamps included various denominations with a view of Martinique’s capital, Fort-de-France. 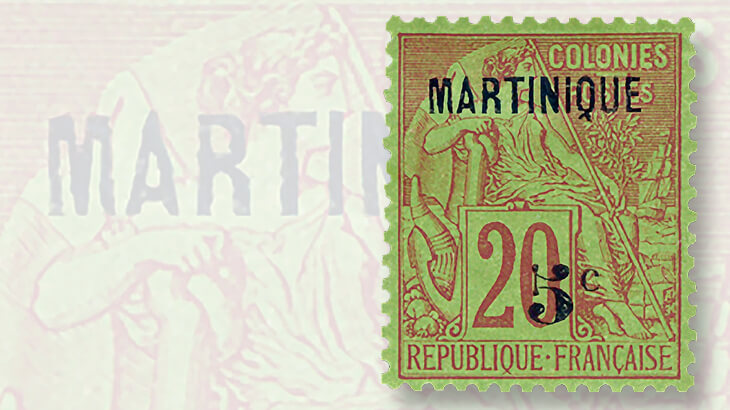 Martinique’s first postal issues were the overprinted and surcharged French Colonies Peace and Commerce stamps, in 1886. 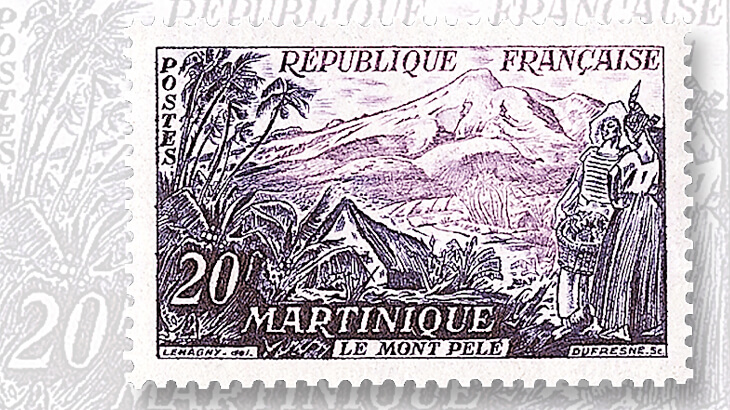 France issued this stamp in 1955 depicting Mount Pelee in Martinique. 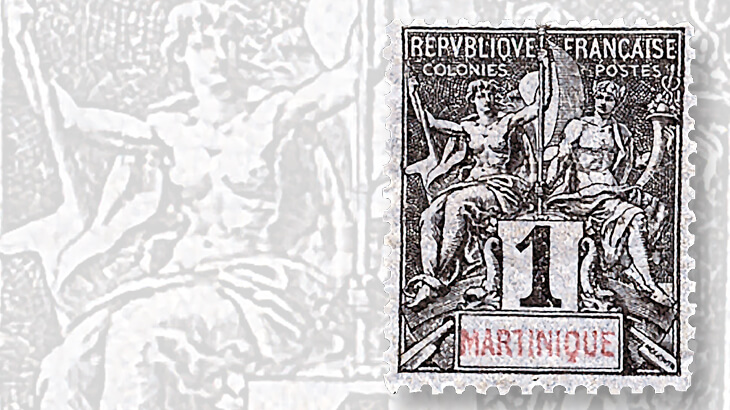 In 1892, France’s Navigation and Commerce stamps with “Martinique” at the foot of the design became the island’s new issues. 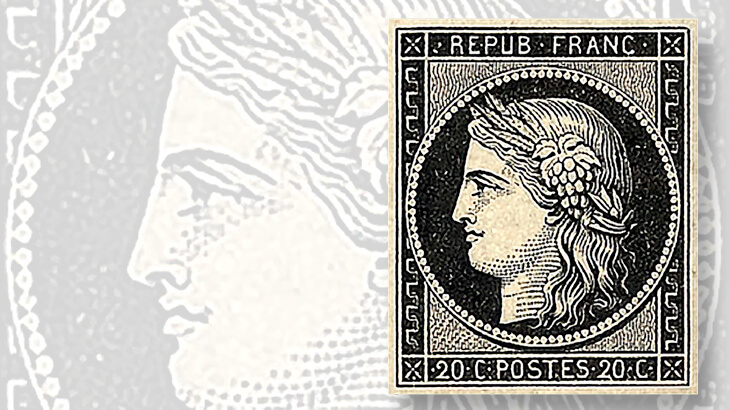 France’s first issues were the Ceres design, beginning in 1849. Under French control since 1815, Martinique began using Ceres stamps in 1851 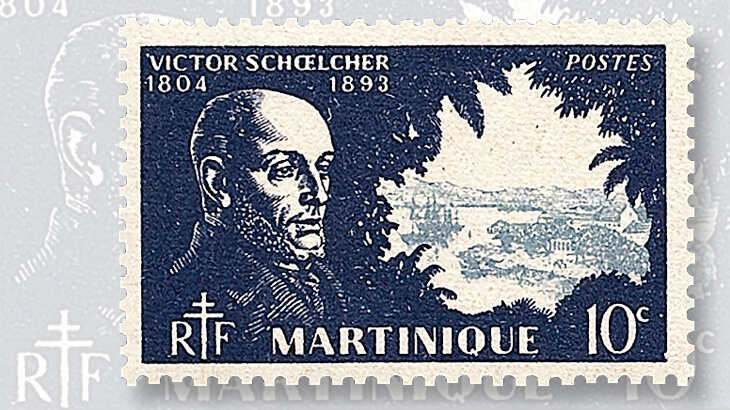 Another stamp honoring the Martinique hero Victor Schoelcher was issued in 1945. 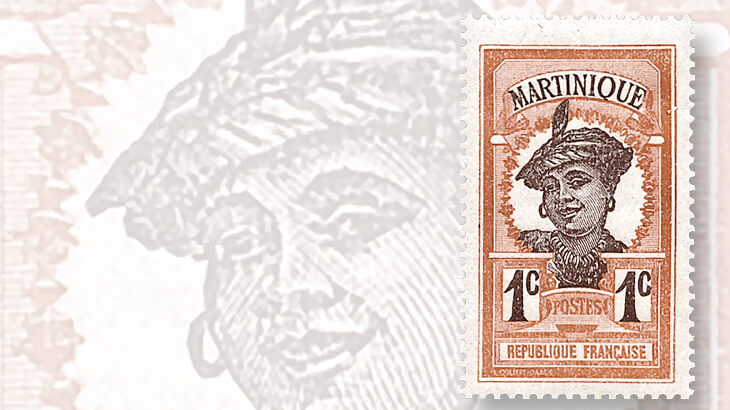 New stamps showing images of the island emerged in 1908, including a design of a Martinique woman. The series lasted through 1930.
Previous
Next

Martinique is a small island in the Eastern Caribbean, within the Windward Islands of the Lesser Antilles. It lies between Dominica at its north and St. Lucia at its south.

On his fourth voyage, in 1493, Christopher Columbus charted Martinique, but Spain did not claim Martinique as its own. Columbus named the island “Martinica” on his visit in 1502.

French control of the island solidified in the mid-17th century, despite Dutch and English attacks on Martinique in the late 1600s.

Control of the island finally changed hands in 1763, when the Treaty of Paris ending the Seven Years’ War forced France and Spain to return their conquered lands to the original claimants, England and Portugal, and Martinique again became British.

In 1802, the British returned the island to France under the Treaty of Amiens, but reclaimed it and held it from 1809 to 1814. During this period, there was a British post office on Martinique.

This was the pre-stamp era, but if you can find a cover with markings to show it was sent from the British post office in Martinique between 1809 and 1814, you have found a treasure.

Martinique was restored to France yet again in 1815. When France first began issuing stamps in 1849, using the Ceres design, Martinique began using them for postage. The Ceres issues were used in Martinique from 1851 to 1859.

Then, in 1859, France created stamps specifically for use at post offices within its colonies, which included Martinique. French Colonies Scott 1, pictured here, is the 1-centime stamp. The six denominations use the eagle and crown design, but printed in different colors.

Beginning in 1886, Martinique received French Colonies 20c stamps of the Peace and Commerce design that were overprinted with the name “Martinique” and surcharged.

Martinique Scott 1 is surcharged “5” (centimes) on the 20c stamp. The scarce variety listed as Scott 2, shown here, is overprinted with the colony name and “5c.”

The Scott Standard Postage Stamp Catalogue lists several dozen of the surcharged stamps and their varieties for Martinique, and they are a collecting (and budgetary) challenge. The surcharges, which were intended to be upright, are also known inverted, doubled or slanted.

Between 1892 and 1906, the name “Martinique” appeared in carmine or blue as part of the design, not an overprint, on a set of 21 different denominations of France’s Navigation and Commerce stamps (Martinique Scott 33-53). These had a box at the foot of the design, in which “Martinique” and other French colonies’ names fit nicely.

The 1c Navigation and Commerce stamp with “Martinique” in red (Scott 33, issued in 1892) is shown nearby.

This stamp also is known with the inscription in blue — a scarce and expensive addition to your collection. The same design with “Martinique” omitted is even scarcer.

Martinique began to issue pictorial stamps showing people and places of the island in 1908, and those issues had a long run, until 1930.

In addition to portraying several native women, this set (Scott 62-100) includes many denominations with a design showing a view of Fort-de-France, the capital city. Unfortunately, many of these attractive stamps were surcharged, obscuring the images, for use from 1912 to 1931.

Martinique issued stamps in 1935 to commemorate the tercentary of French possessions in the West Indies. Three of them (Scott 173-175) have an image of the landing of Pierre Belain d’Esnambuc, and the other three (176-178) share a design marking the freeing of the island’s slaves in 1848.

The latter design portrays freed slaves hailing Victor Schoelcher, a Frenchman who worked for the abolition of slavery in the French West Indies, including Martinique.

The abolitionist was commemorated a second time, in 1945, with a set of 19 stamps (Scott 198-216) bearing his image, in many different denominations and colors.

Mountainous and rugged Martinique, itself of volcanic origin, still has a volcano, Mount Pelee, which is classified as “semi-active,” meaning it is not active but is registering seismic behavior.

Pelee’s eruption in 1902 killed some 30,000 people and is considered the worst volcanic disaster of the 20th century.

The volcano appears on only three stamps of Martinique, Scott 226-228 (the same design in three different denominations), part of a set of 17 attractive pictorial stamps issued June 2, 1947.

A set of three airmail stamps (C10-C12) was issued on the same day.

These June 2 issues turned out to be the last postage stamps issued by Martinique, and you probably wonder why.

In March 1946, the National Assembly of France voted unanimously to transform Martinique’s status from colony to Departement d’Outre-mer (overseas department), a geopolitical designation somewhat similar to a county in the United States. With this change, Martinique once again could use French stamps.

To recognize Martinique and its other overseas departments, France occasionally issues stamps with local images. For example, a French stamp depicting Mount Pelee was issued in 1955 (Scott 780), and a colorful scene of the town of Saint-Pierre appears on a 1999 stamp (2724).

Other types of Martinique postal issues can be collected in addition to regular stamps: semipostal stamps, airmails, postage dues and parcel post stamps.