Stamp collecting can be just a paper chase 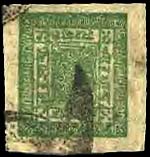 Figure 6. The 4-anna green Sripech and Crossed Khukris stamp, Nepal Scott 9, is an example of a stamp printed on native paper. 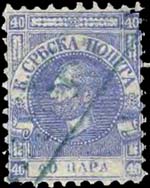 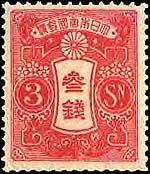 Figure 4. This Japanese stamp issued in 1914 is printed on granite paper. 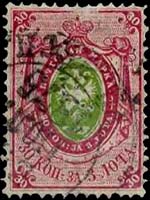 Figure 1. This Russian stamp issued in 1866 is printed on horizontally laid paper.
Previous
Next

Even with today's modern technology, most of the world's postage stamps are still printed on paper, just as they were when they were first developed beginning in the 1830s and later. Yes, there are notable exceptions, such as stamps embossed in three dimensions from Bhutan and stamps printed on gold foil from Tonga.

There have even been United States self-adhesive 25¢ Flag stamps, Scott 2475, printed on thin plastic film and issued in sheets the same size as U.S. currency. These were sold from automatic teller machines.

Noted exceptions aside, most stamps are still printed on paper. Stamp catalogs are full of terms that describe paper types, such as laid, granite, wove, batonne, silk, native, India and even goldbeater's skin.

The kind of paper that a stamp is printed on can help to correctly identify the stamp, especially in cases where the stamp was printed on more than one type of paper.

To understand stamp paper, you need to know a little about how paper is manufactured.

Perhaps you have made paper yourself in an art class or when you were in Scouting.

The process is surprisingly simple. Wood or plant fibers are crushed and made into a pulp. The pulp is mixed with water into a slurry called "stuff" and poured into a vat.

A frame or mold containing a metal or plastic screen is placed into the vat. The mold is lightly agitated to disburse the stuff and then it is withdrawn. The excess water drains away, leaving the fibers attached to the screen within the mold. This is turned out onto an absorbent surface and allowed to dry into one sheet of handmade paper.

Paper artists and crafters add all sorts of things to the stuff to make the end result more interesting. Bits of colored fabric, flower petals, confetti and glitter have all been incorporated into handcrafted papers.

Modern paper is mass-produced in continuous rolls by huge machines, but rather surprisingly, the basic theory is still the same.

Plant or wood fibers are made into a pulp with water. The stuff is disbursed across an enormous, continuous screen, which collects it and then drains the excess water away.

If the paper is to have a watermark, it is at this stage that watermarking occurs.

The watermark pattern is either a part of the screen that collects the stuff, or a special roller called a "dandy," which carries the repeated raised design of the watermark.

The screen itself may impart other characteristics that give different types of paper their names and special appearances.

From this point the paper is fed through a series of absorbent blanket rollers to complete the drying process and press the paper into uniform thickness.

Special coatings can be applied later in extra steps depending upon the requirements of the printing.

One coating that was applied to paper used for stamps was zinc white mixed with glue, which was sprayed on the surface of the paper. This prevented the printing ink from soaking into the paper fibers so that if someone attempted to soak off a cancel and reuse the stamp, the entire design would disappear too.

This coating was bad news for stamp collectors who wanted nice examples of used stamps for their collections, but it was an effective way for postal administrations to protect revenue.

Fortunately, this method fell out of favor, but other modern glossy coatings sometimes have the same effect, causing worry among collectors who prefer to collect postally used stamps.

If you suspect a stamp that you want to soak is coated with something, try to avoid submerging it completely.

Let the clipping float with the stamp face up on the water. You should be able to get the gum to release without getting the front of the stamp wet. With extra time and patience the stamp should come free.

Other techniques can affect the appearance and texture of paper. Dye can be added to make tinted paper. Various types of fluorescent or luminescent agents can be added to paper to make it whiter or to trigger automatic canceling machines.

Here are the most commonly found stamp paper types you are likely to encounter.

Wove: A smooth, evenly uniform paper that gets its name from the finely woven screen upon which it is formed. Virtually all of today's U.S. stamps are printed on wove paper, and it is the most commonly used paper in all stamp production.

Laid: When held to light, laid paper shows numerous parallel lines in a similar way to a watermark. These lines were formed because parallel wires were added to the screen to give additional support. These left their mark within the paper fibers.

Many countries have used laid paper for stamp printing. This paper is said to be either horizontally or vertically laid, depending on which way the lines run in relation to the stamp design.

Sometimes the chains that pulled the screen left perpendicular lines in laid paper.

Issued in 1866, the 30-kopeck carmine and green Coat of Arms stamp, Russia Scott 25, shown in Figure 1, is printed on horizontally laid paper.

Batonne: "Batonne" is a French word meaning "staff" or "wand." This type of paper, very similar to laid paper, is formed in the same way, except that the screen lines are much farther apart.

Silk: Silk paper has bits of silk fiber that are added to the stuff during manufacture. This was originally done as a security measure to thwart counterfeiting, but it has also been used for purely decorative purposes.

Granite: Granite paper is quite similar to silk paper in that colored cloth or paper fibers are added to the stuff during its manufacture.

The difference is that the fibers added to granite paper are much smaller and more dense and impart a color and texture rather than the distinctive threads of silk paper.

Pelure: Pelure paper is thin, strong and semitransparent because of a high "rag" or cotton-fiber content. The paper is often bluish or grayish.

India: Sometimes called China or China clay paper, India paper is tough and thin. It was most commonly used for creating die proofs of stamp designs before plates are made from the dies.

Native: This is another term for handmade paper. It is generally coarse with variances in thickness.

The 4-anna green Sripech and Crossed Khukris stamp, Nepal Scott 9, shown in Figure 6, is an example of a stamp printed on native paper.

Goldbeater's skin: This is a tough, transparent paper that has been saturated in a resin compound.

When used for stamp production, the printing was usually done in reverse and then gum applied on top of the printing. When affixed, the stamp design would appear in normal orientation, much like a decal.

This production method was highly effective against stamp reuse because removing the stamp from the envelope or document upon which it had been affixed would destroy the stamp design.

Issued in 1866, the Prussian 30-silbergroschen blue stamp, Scott 22, shown in Figure 7, is printed on goldbeater's skin.

It is important to remember that paper is inherently fragile. With mishandling it will crease, tear or absorb oil or dirt.

If stored improperly, paper can grow mold or mildew. It can turn color or self-destruct over time if it is of poor quality. Heat and humidity attack it. Bugs and rodents love to eat it. It will burn easily.

Take care of your stamp collection. After all, the stamps are only paper.