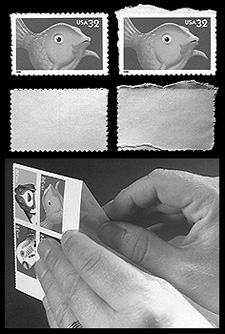 Figure 3. Detaching mint self-adhesive stamps from a full pane can be tricky. The single stamp shown front and back at top left and center left looks much better than the stamp at right. The bottom photo shows these stamps should be folded back-to-back only, not front-to-front.

Whether you like them or not, you can say one positive thing about die-cut self-adhesive postage stamps: they hardly ever have perforation teeth that are damaged.

Perforation teeth are the paper points or tips that stick out around the edge of a stamp. Damage to these tips can occur through carelessness as stamps are being separated from one another or during processing through high-speed postmarking machinery.

Because the edges of self-adhesive issues are precut in a shape resembling perforation teeth, they are rarely damaged in any way.

Traditional stamps with water-activated adhesive bought at the post office are separated from one another by lines of perforation holes that surround each stamp, as shown in Figure 1.

It's easy enough to tear the stamps apart from one another, either to use for postage or to add a single stamp or block to a collection.

However, it is just as easy for your tearing to go astray, nipping off the corner of a stamp or even tearing through part of the design.

The United States 32¢ Ballet stamp shown at the top of Figure 2 illustrates one form of damage to perforations. The lower-right corner of the stamp was nipped off when the stamp was separated from the pane.

Compare the two enlargements of corners shown at the bottom of Figure 2. The stamp tips were darkened in the illustration to show the damage more clearly.

The corner pictured on the left is complete and undamaged. The corner at right is an enlargement created from the damaged stamp above it.

The best prevention for this separation problem is to weaken the tiny area of paper between the perforation holes before you begin tearing.

That's done by carefully folding the stamps straight along the line of perforation holes, first back-to-back, then front-to-front, and then back-to-back again.

Each time, when the stamps are completely folded, run your pinched fingers along the line of the fold, adding a little pressure to the fold to further weaken the paper fibers.

If you need to tear through unperforated margin paper around the stamp, you might try adding the pressure of a fingernail on the fold in the margin area to make a sharper crease. Otherwise your perforated stamps may separate well enough, but you could wind up with a scraggly tear through the margin.

Apply that fingernail pressure on the side of the fold that you won't be saving in your collection. That way, if you scrape the back of the stamp paper a little it won't make any difference.

Don't try to tear stamps around corners. That is, don't try to remove one stamp from a full pane, leaving the rest of the pane intact.

Removing stamps that way increases your chance of tearing off a corner.

Instead, separate a full row of stamps using the method described previously. Then, remove the single stamp from the end of the full row. That should reduce your chance of damage to the corners.

Scissors or razor knives should not be used to separate perforated stamps. Although you can make a straight cut along the holes using these tools, most collectors consider stamps cut from the pane through the perforations to be damaged.

Unfortunately there are other types of damage that may occur during stamp separation. If perforation holes are fairly large, the separated stamps may have unusually short perforation teeth along one or more sides.

These are called nibbed or shaved perforations because of their short appearance. Sometimes a single short perforation tip in an otherwise normal row is described as a nibbed perforation.

Try to make sure you fold through the center of the perforation holes to avoid this problem.

Damage from bends and folds is also a hazard. Because perforation teeth are fragile and stick out away from the paper, they are easily bent or creased. Collectors must always be careful handling stamps to make sure this type of damage does not take place.

The proper use of stamp tongs in handling stamps reduces the chance for such injury.

Self-adhesive stamps may suffer less damage to their teeth, but they present a new set of problems for the stamp collector.

Most smaller U.S. self-adhesive stamps are manufactured on a coated backing paper that is not die-cut in any way. To save a single stamp, the collector must peel off all the stamps around the one he wishes to save, leaving one stamp with exposed backing paper all around.

Of course, the peeled-off stamps may be used for postage.

The collector then can use scissors or a razor knife to trim around the mint stamp, leaving a little extra backing paper on all four sides.

Most larger U.S. self-adhesives are issued on backing paper that has die-cut slits through it, so the collector may separate and save one mint stamp or block from the full pane.

These backing paper die-cuts are not the most cooperative features, however. As the stamps shown in Figure 3 illustrate, you may wind up with a collectible stamp or an ugly mess.

The 32¢ Fish stamp shown at the top left has been neatly removed from the pane with the backing paper attached. The stamp still has a fuzzy appearance all around the edges, which is normal for stamps removed in this way.

The stamp at top right really cannot be added to a collection. There is excess backing paper along the top of the stamp.

Even worse, backing paper along the bottom of the stamp is torn short leaving stamp adhesive exposed. This can be seen in the photo of the reverse of the same stamp, shown at center-right in Figure 3.

As with perforations, the backing paper die-cuts may be weakened through careful folding.

However, die-cut backing paper slits should be folded in only one direction: back-to-back, but not front-to-front, as shown in the photo at the bottom of Figure 3.

Because of the way the die-cut perforation tips join one another on these self-adhesive stamps, folding them front-to-front will bend and possibly damage the perforation tips.

Folding the stamps back-to-back once or twice before separating the mint stamps on backing paper should help to create a neater separation, such as on the Fish stamp at top left in Figure 3.

A few collectors have decided to eliminate the fuzzy appearance of the backing paper and the hazards of exposed adhesive by sticking the single stamp on a scrap of paper, waiting a day, and then soaking the stamp off in water.

The result is an unused stamp with no adhesive. It is no longer considered a mint stamp, and what little value a modern stamp might have is probably reduced by this method. However, the stamp presents a nice clean appearance in a stock page or stamp album.

Another alternative with these larger self-adhesives is to follow the same method described previously for smaller stamps on backing paper without slits.

The decision of how to save these self-adhesives, as with all stamps, often depends upon the preferences of the collector.