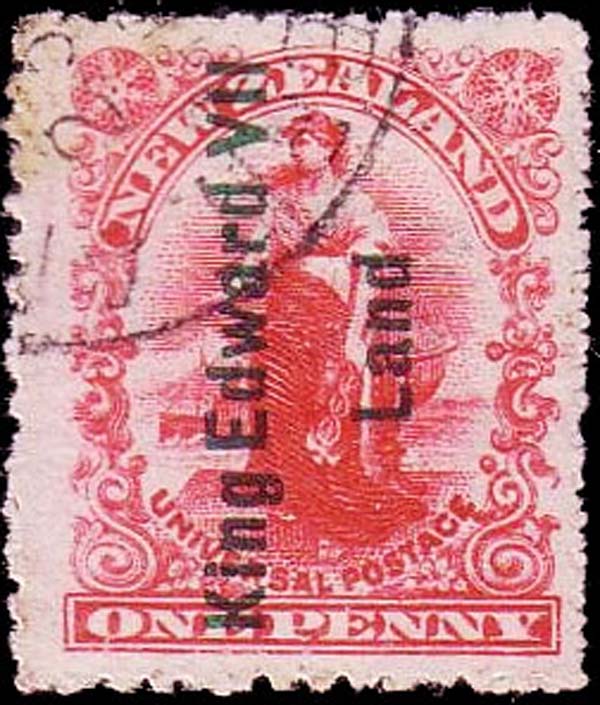 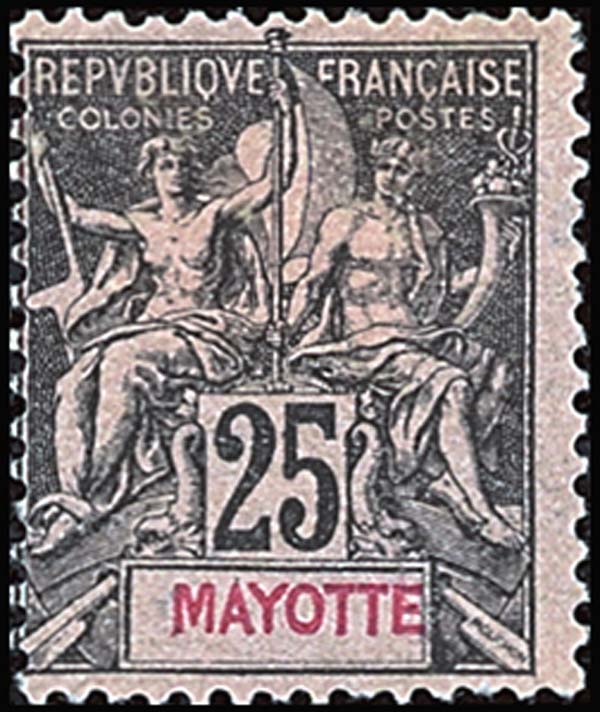 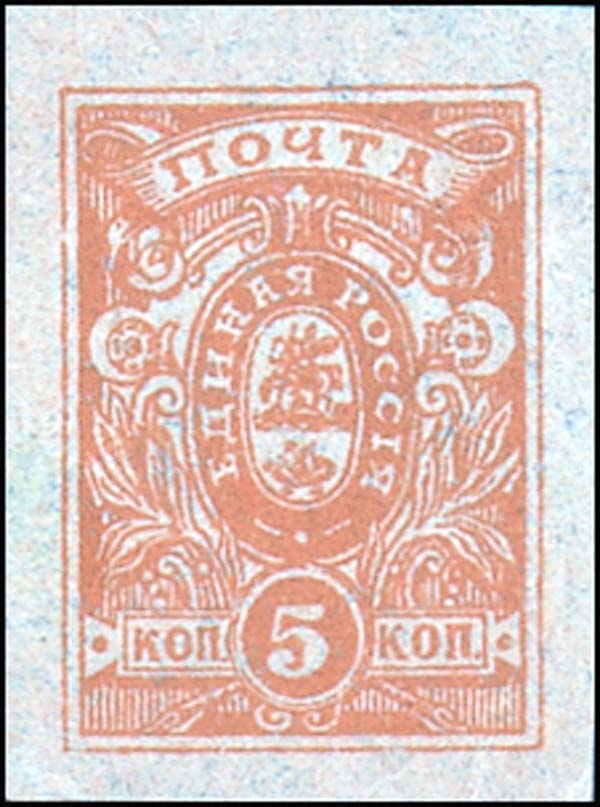 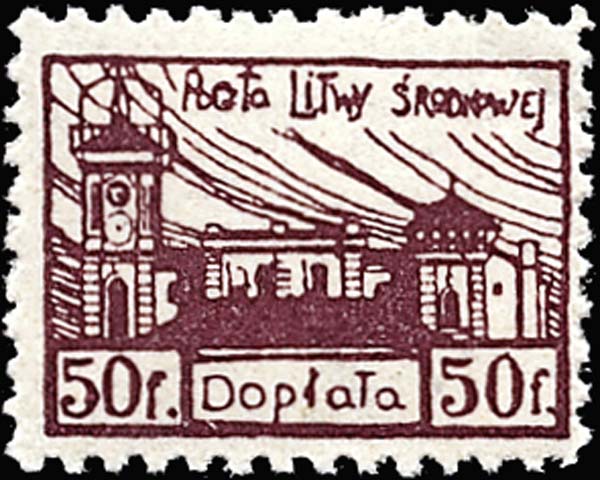 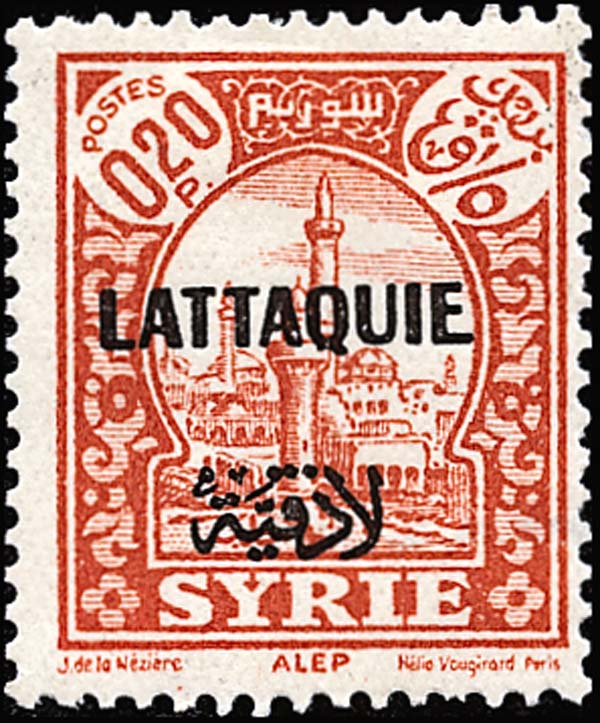 Figure 2. A Latakia 20-centime brown-orange stamp (Scott 4), with "LATTAQUIE" overprinted on a Syrian stamp. Click on image to enlarge. 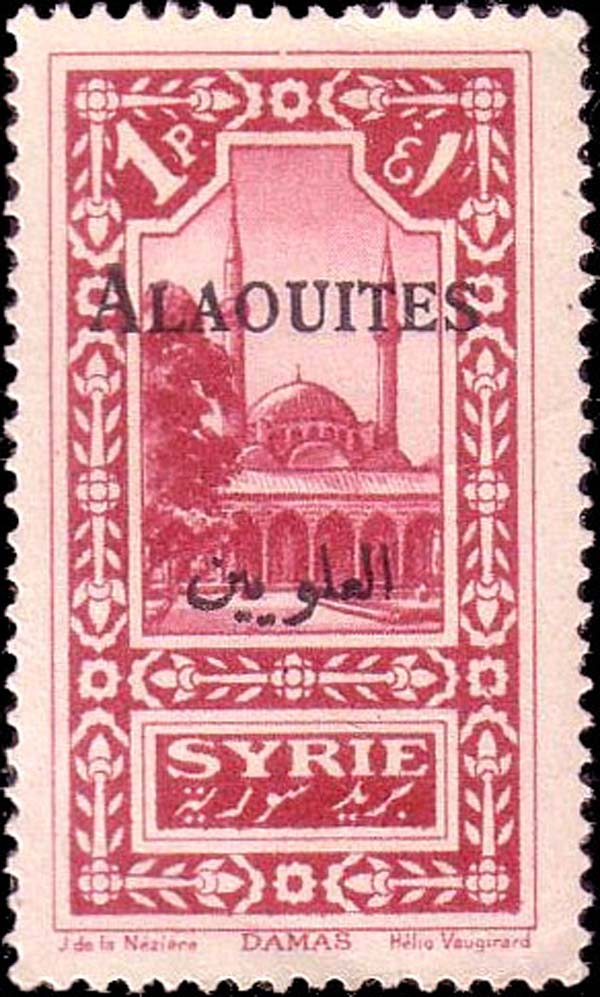 Figure 1. An Alaouites 1-piaster magenta stamp (Scott 29), with the overprint "Alaouites" on a Syrian stamp. Click on image to enlarge.
Previous
Next

In my collection, some of these places are represented by a single stamp on the page, so another of my resolutions is to find more stamps to fill out the page and to find at least one stamp for those countries that are totally unrepresented.

Because my worldwide collection has a self-imposed limit ending at 1935, and because the album that contains this collection is an ancient one published in that year, none of the World War II occupations or post-WWII turmoil is represented.

That's OK by me. World War I provided enough in the way of occupations, plebiscites and restructuring of the maps in the postwar period to keep a collector engaged for very long.

Delving into these areas gives a better grasp of history, not to mention geography. It also helps a collector learn how to properly identify and catalog difficult stamps.

The first of such stamp-issuing countries in my album is from a place called "Alaouites" (pronounced al-uh-WHEETS) The few stamps I have with this name, such as the 1-piaster magenta stamp shown in Figure 1, are overprints on Syrian stamps. It is a good guess that Alaouites is in the Middle East.

The Merriam Webster's Geographical Dictionary did not have a listing and, more alarmingly, neither did the Encyclopaedia Britannica.

Where was this place and why did it not issue stamps before 1925?

Because my two general references turned up blanks, I went to the Scott Classic Specialized Catalogue of Stamps and Covers 1840-1940, which is a phenomenal resource for worldwide collectors. A recent benefit is that it shows most stamp illustrations in color.

According to the Scott Classic specialized catalog, Alaouites was a division of Syria, in western Asia. It became an independent state in 1924 and was administered as a French Mandate. I quickly found my stamp listed as Alaouites Scott 29.

In 1930, the area was renamed Latakia, so that means it had stamps as Alaouites for only five years. This makes Alaouites a great subject for a limited specialized collection. I wonder how difficult it would be to find Alaouites stamps used on covers.

OK, now I know that Alaouites became Latakia. I flipped the pages of my album to the "L" countries and found that I had three Latakian stamps, one of which, a 20-centime brown-orange overprinted "LATTAQUIE" (Scott 4) is shown in Figure 2. The underlying stamp is Syrian.

Being the curious sort, I wondered about Latakia of today. What is its political status? According to the geographical dictionary, it is a former republic that is part of Syria. It comprises a coastal region between the Lebanon Mountains and the Mediterranean Sea opposite Cyprus. Before World War I, it was part of the Ottoman Empire.

I recently hinged the red-violet postage due stamp illustrated in Figure 3 into my album. Can you tell where it is from?

It took me a little while to make out the writing on the top of the stamp: "POCZTA LITWY SRODKOWEJ." It looked like Polish to me, but Polish stamps are inscribed "POCZTA POLSKA." The "LITWY" inscription sent me to my Linn's Stamp Identifier(second edition, 2004) which quickly pointed me to Central Lithuania, a disputed territory north of Poland and south and east of Lithuania.

My stamp is a 50-fennigi Vilnius University postage due stamp (Scott J1).

Central Lithuania had a turbulent history as a region with a mixed population desired by Lithuania, Russia and Poland, and that history is interesting.

The Bolsheviks occupied Central Lithuania, which includes the Lithuanian capital of Vilnius. But by July 1920, the Lithuanian army had driven the Red Army out.

Once the Poles were finished with the Russo-Polish War of 1919-20, Polish forces began moving into Central Lithuania against stiff Lithuanian resistance.

The Allied and Associated Powers pressured Poland and Lithuania to stop fighting over the territory, so Polish commander Marshal Pilsudski arranged for one of his generals to pretend to mutiny and invade Central Lithuania. This fake mutiny allowed the Polish government to officially deny involvement in the attack.

With the advantage of surprise, the Poles drove the Lithuanians back. The Lithuanians rallied and began retaking Central Lithuania, but the Allied and Associated Powers intervened and again halted the fighting, leaving the Polish army in de facto control of the country.

Because the Poles controlled the military and political power, they were able to engineer the election of a Polish-dominated assembly that voted for union with Poland.

Poland annexed Central Lithuania in 1922. As a result, Lithuania and Poland remained in an undeclared state of war, with no trade, commerce or diplomatic relations until 1938.

After the conquest of Poland in 1939, the Soviet Union returned Central Lithuania to Lithuania. The Soviets could afford to be generous, for under the secret provisions of the Molotov-Ribbentrop Pact, Nazi Germany had given the Soviet Union license to annex all of Lithuania, which it did in June 1940.

I will admit that Cyrillic alphabets throw me for a loop. When I have a questionable stamp, the first thing I do is look at my Russian stamps. If I don't find enough similarities, I look to stamp identifiers.

The Illustrated Identifier section in the back of the Scott Classic specialized catalog is broken into sections by the inscriptions on the stamps. From heavy use, my catalog naturally falls open to the Cyrillic Inscriptions pages.

Figure 4 shows a stamp that doesn't match the other stamps I have from Russia, so I look to the Scott stamp identifier. It tells me the inscription at the bottom of the stamp "KON" is an abbreviation for "kopeck," a Russian monetary unit. The Cyrillic alphabet around the central emblem was my key to identifying the stamp's origin and, ultimately, the correct placement of the stamp in my album. In short order I found a match — South Russia.

The catalog also identifies this stamp as one of the "Denikin issue."

That's interesting, because Gen. Anton Denikin was the leader of the People's Volunteer Army, an anti-Bolshevik or White force that operated in southern Russia against the Reds.

Denikin's army advanced through the Ukraine, with a goal to take Moscow, but peasant uprisings broke out behind the front and Denikin never made it to Moscow.

A demoralized Denikin left Russia. He emigrated to France and eventually to the United States, where he died in 1947 in Ann Arbor, Mich.

We know this is a stamp issued by a French colony because the top of the stamp is inscribed: "REPUBLIQUE FRANCAISE COLONIES POSTES."

Also, the stamp uses the allegorical Navigation and Commerce keytype design used by French colonies just before and after the beginning of the 20th century.

Keytype stamps are those that were printed from two plates. One printed the main design, and then a second plate printed the country name and, if necessary, a denomination.

France, Portugal and Great Britain used keytypes extensively for their colonial stamps. It was both cost effective and symbolically demonstrated each colony's connection to the motherland.

But where is Mayotte? And why do I have only one stamp from there?

Mayotte is one of the Comoro Islands. It comprises only 144 square miles. It lies off the coast of East Africa in the Mozambique Channel in the Indian Ocean between Mozambique and the island of Madagascar.

The population is less than 200,000. At the time my stamp was issued, the population was only about 50,000, and the literate population would have been a tiny fraction of that.

That would help explain the dearth of Mayotte stamps in my collection.

I looked online for some information about Mayotte and found a tourist web site that directs the potential tourist to fly to Mayotte from Reunion.

You can stay at a lagoon or town hotel and participate in fishing, boating, hiking and ecotourism. I know I am already wintered out, but it looks wonderful, warm, sunny and tropical.

Much to my surprise, my Internet search turned up a Mayotte stamp on one of the web sites. But it wasn't my old keytype stamp — it was a recently issued stamp.

Further investigation revealed that Mayotte is no longer a dead country.

These new Mayotte stamps came about because the people of Mayotte chose to remain under French rule when the rest of the Comoro Islands became independent.

These new stamps will not fit in my pre-1935 album, but I am tempted to start a new collection of recent Mayotte stamps.

Figure 6 shows a stamp overprinted "King Edward VII Land." Like the stamp from Alaouites, this is a provisional stamp produced by overprinting.

This means we get a big clue to its origin from the underlying stamp. In this case it is a stamp from New Zealand.

The New Zealand stamp is commonly known to collectors as a "Penny Universal," because of the inscription "universal postage" below the feet of the central allegorical Commerce figure.

The overprint in green ink was used in 1908 to produce stamps for the Shackleton Expedition to Antarctica. The New Zealand government appointed Lt. Ernest H. Shackleton as postmaster of the expedition and issued him a cancellation device that read "Brit. Antarctic Exped" within a circle.

Although the expedition was successful and stamps were used and postmarked during the expedition, the stamps themselves were never actually used at King Edward VII Land.

The expedition failed to find the landing place there and voyaged instead to McMurdo Sound, where a base camp was established.

The overprinted stamp is listed as New Zealand Scott 121a.

Resolve to take the time to listen and learn the stories your stamps want to tell you.