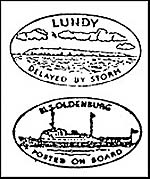 Postal markings for storm delay and for mail posted on board the supply ship that services Lundy Island.

Although most of us take daily postal service for granted, there are some areas of the world where this type of convenience does not exist.

In many cases, though, so-called local posts clearly serve no purpose and exist only to sell stamplike labels to collectors.Some such places have made use of private local posts that carry mail to a government post office, where it is then deposited and handled normally.

Other local posts have an established history of service that make their study much more interesting.

A little more than 10 miles off the coast of southwestern England, where the north Atlantic Ocean meets the Bristol Channel, there lies a small granite island three miles long and half a mile wide.

This island, called Lundy, has fewer than 20 human inhabitants, most of whom work for Britain's Landmark Trust, which currently oversees public use of the island's marine and nature preserve.

Visitors arrive regularly to dive in the waters off the island's coast or to observe the many unusual birds that reside there, including the cherished puffin.

Mail service to and from this isolated island has had a long and interesting history.

In the September 1961 issue of the American Philatelist, Gladys Moon wrote that British postal authorities set up a post office on Lundy in 1887 that remained open for 40 years.

Mail sent from that location bore British stamps and was marked with a Lundy cancel.

In 1927, the island's owner, Martin Coles Harman, requested that the office be closed, possibly following a disagreement with British postal authorities.

As a result, mail had to be privately ferried from the island to mainland England. It wasn't long that Harman decided to issue his own stamps to pay for the collection and transport of mail from Lundy to the British post office.

The first two stamps Harman created depicted the puffin, a charming native sea bird for which the island is named ("lund" meaning "puffin" in an old Norse language).

In fact, Harman chose to denominate the stamps in "puffins" rather than the British "pence," though the rate of exchange between the imaginary puffin and the genuine British penny always seem to be equal.

He contracted with the British printer Bradbury, Wilkinson & Co., to manufacture the stamps by single-color lithography, and in 1929 the first Lundy local stamps were put into use.

The design of the ½-puffin stamp featured, appropriately, only half of a puffin: that is, a bust portrait showing only the bird's head and shoulders.

The following year three more designs were issued: 6 puffins, 9 puffins and 12 puffins, each design showing the corresponding number of birds.

The British Post Office soon declared that if the Lundy local stamps were going to be affixed to envelopes entering the British mailstream, they had to be placed on the back of each envelope rather than the front. However, when incoming mail arrived from the mainland, Lundy stamps were affixed to the front and canceled before the mail was delivered to the addressee.

No additional Lundy stamps were issued for several years, but as time passed a number of new stamps were created.

By the 1950s new Lundy issues were appearing with some regularity. A 1954 set marking 25 years of Lundy stamps included the 2-puffin stamp shown in Figure 1.

The stamp shows a puffin portrait at upper right and a map of the island as its central design.

A variety of different markings have been employed to cancel the stamps when they are used on mail, including some pictorial handstamps depicting the puffin and simpler circular markings that show the island's name.

Harman died in 1954 and ownership of the island passed to his three children.

The island was purchased by Britain's National Trust in 1969. Landmark Trust, a British preservation charity, is charged with administering activities on Lundy and protecting and restoring the island's many fascinating features.

As of Dec. 9, 1992, the British postal service granted permission for Lundy stamps to appear on the front of envelopes, affixed to the lower-left corner.

Figure 2 shows a 1993 cover from Lundy to the United States that takes advantage of the revised rules.

The multicolor 49-puffin Lundy stamp at lower left shows a scene from the island. It is canceled with a circular postmark that reads "LUNDY BRISTOL CHANNEL" and bears the mailing date April 24, 1993.

The cover is also franked with a 39p postage meter imprint from Bideford, a town on the mainland in the county of Devon in England.

The meter stamp is pictorial, promoting Lundy as a tourist destination with an image of one of the island's three lighthouses, in the oval at upper left.

Mail to and from Lundy is carried on the M.S. Oldenburg, which also ferries visitors to the island on day trips.

Postal markings that may appear on Lundy covers these days include "DELAYED BY STORM" and "M.S. Oldenburg POSTED ON BOARD," both pictorial oval markings shown in Figure 3.

The local post stamps of Lundy are private issues not recognized by the publishers of most major stamp catalogs, including Scott Publishing Co. and Britain's Stanley Gibbons.

A British club for collectors interested in the stamps and postal history of Lundy welcomes members from the United States.

The club issues a journal three times per year and conducts regular auctions of Lundy material.

You can also learn more about Lundy island tourism by writing to The Lundy Office, The Quay, Bideford, Devon EX39 2LY, England.