Stamps Trace History of Indonesia From Colony to Republic 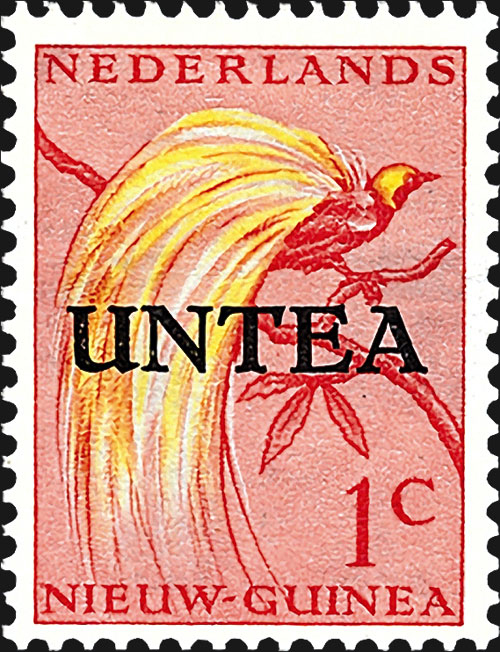 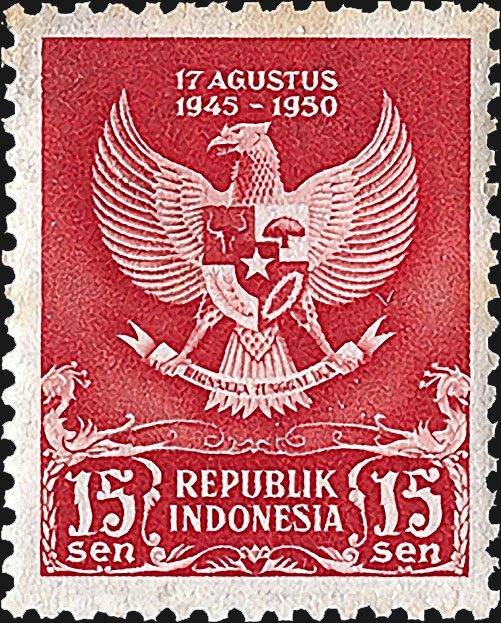 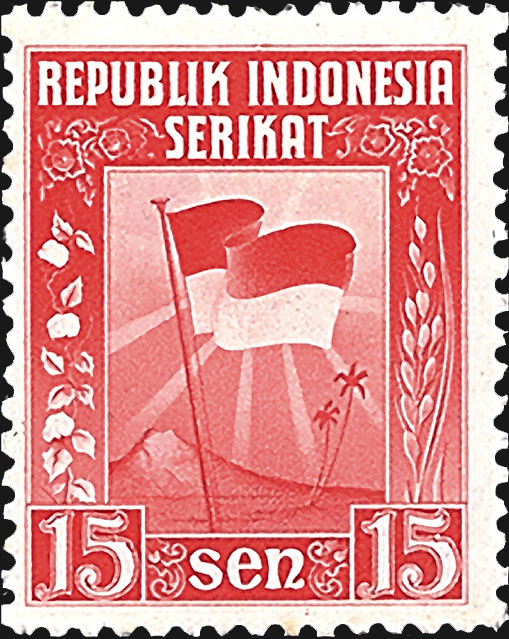 Figure 7. A 15s Mountain, Palms and Flag of Republic stamp (Scott 333). Click on image to enlarge. 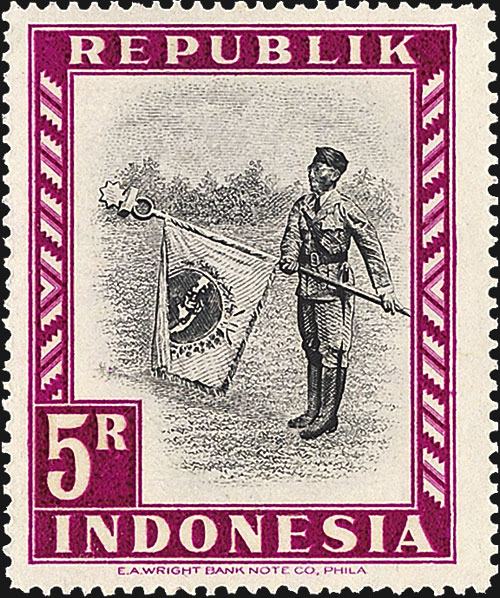 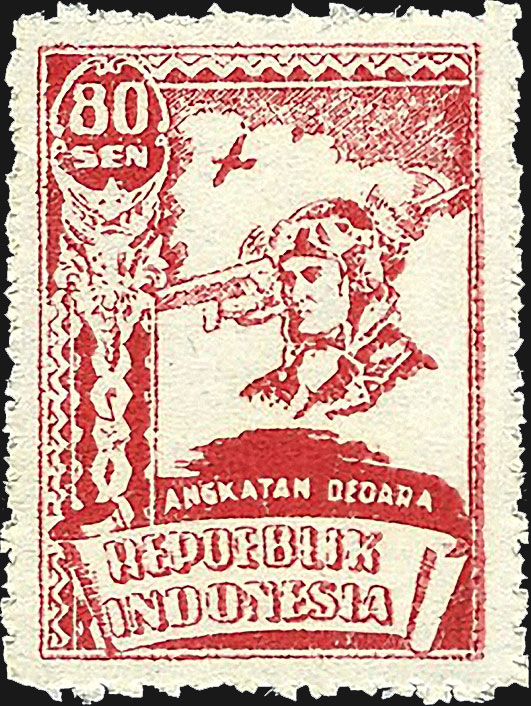 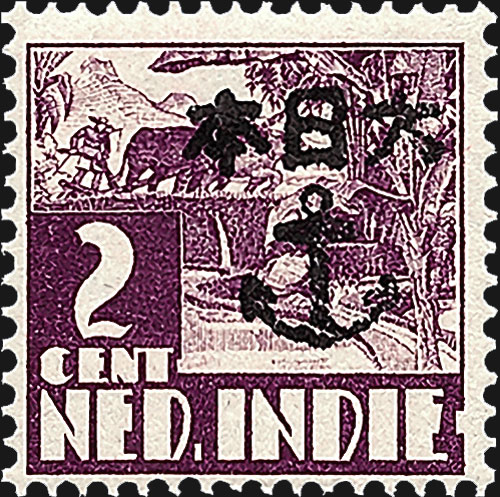 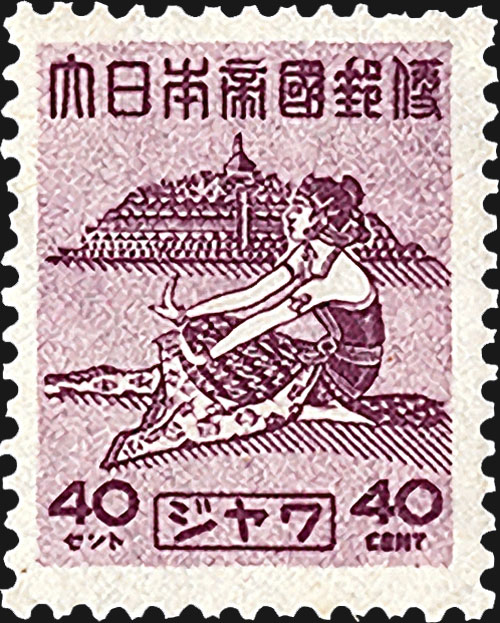 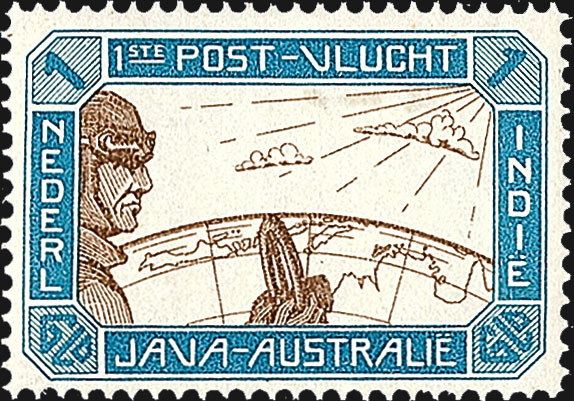 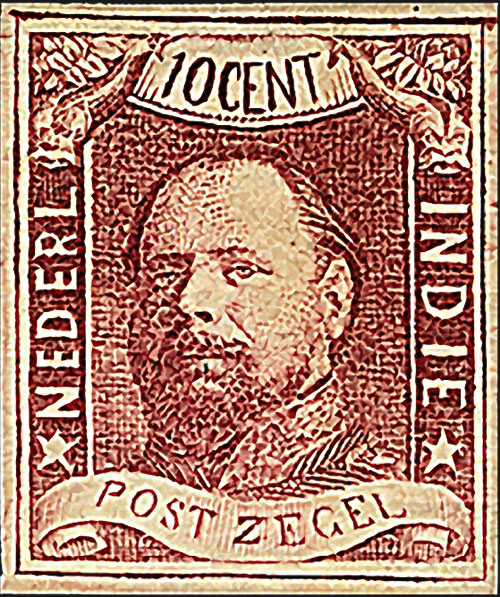 Figure 1. The imperforate 10¢ King Willem III stamp is the first issue of Netherlands Indies (Scott 1). Click on image to enlarge.
Previous
Next

The nation known today as Indonesia began its stamp-issuing activities in 1864. The country at that time was the colony Netherlands Indies, and its first issue was an imperforate 10¢ King Willem III stamp (Scott 1) shown in Figure 1.

The Dutch were drawn to the land by its agricultural production, with sugar, coffee, tea, rice and indigo among its lucrative cash crops. The colony consisted of 2,000 islands including Sumatra, Java and a large chunk of Borneo, populated by Malayo-Polynesians, Javanese, Chinese, Melanesians and Europeans.

The colony issued many attractive stamps including semipostals, airmails and marine insurance stamps. Figure 2 shows a 1-gulden Airplane Pilot airmail stamp (Scott C13), issued in 1931 for the first airmail flight from Java to Australia. A nationalist movement began seeking independence as early as 1918.

In January 1942, the Netherlands Indies, like most of Southeast Asia, was conquered and occupied by Japan. A variety of Japanese occupation stamps were issued during World War II. A 40-sen Sacred Dancer of Djokja Palace and Borobudur occupation stamp (Scott N9) is shown in Figure 3.

During the occupation, different overprints were applied to captured stocks of Netherlands Indies stamps. These overprinted stamps, produced and used locally, are not listed in the Scott Standard Postage Stamp Catalogue, but they are interesting to collect and help complete the story of the forming of Indonesia. One locally overprinted stamp produced by Japanese naval authorities is shown in Figure 4.

Japan surrendered unconditionally to the Allied powers in August 1945. On Aug. 17, 1945, the former Netherlands Indies, led by Karno Sukarno and Mohammad Hatta, declared its independence as the nation of Indonesia.

But it wasn't as simple as that. Dutch forces tried to re-establish control of the colony and guerrilla warfare broke out, with hostilities lasting until December 1949.

The nationalist authorities overprinted old colonial stamps and issued new stamps locally. These are listed in the Scott standard catalog at the beginning of the Indonesia listings as local issues with catalog numbers prefixed by the letter L. An 80s Pilot local stamp (Scott 1L39) issued in 1946 is shown in Figure 5.

The nationalist authorities also ordered new stamps inscribed "Repoeblik Indonesia" or "Republik Indonesia," printed by the Austrian State Printing Office in Vienna. Known as the Vienna issues, these stamps were first listed by the Scott standard catalog in the 2008 edition. A 5-rupiah Vienna issue, the Military Officer with Flag stamp (Scott 51), is shown in Figure 6.

Prodded by the United Nations and the United States, the Netherlands transferred sovereign rights to the new independent Indonesia. Sukarno was its president and Hatta its prime minister.

The federal form of government was quickly replaced by a government with strong centralized control under Sukarno in August 1950. This led to new stamps inscribed "Republik Indonesia." A 50s Arms of the Republic stamp (Scott 359) is shown in Figure 8.

Eventually, the Netherlands transferred Netherlands New Guinea to the United Nations, which administered it briefly prior to turning it over to Indonesia in 1963. During 1962-63 the territory, called West Irian, used colonial stamps overprinted "UNTEA." The acronym stands for United Nations Temporary Executive Authority. These stamps are listed in the Scott standard catalog among the United Nations listings in Vol. 1, and in Vol. 3 under Indonesia. An overprinted 1¢ Netherlands New Guinea Bird of Paradise stamp (Scott 1a) is shown in Figure 9.

West Irian was incorporated into Indonesia in 1963, but Indonesia continued to issue special stamps for use there as late as 1970. As an independent republic, Indonesia has produced many animal, sports and technology topical stamps.

Collecting stamps from Indonesia is an economical choice for budget-minded collectors who want to learn more about this interesting country.