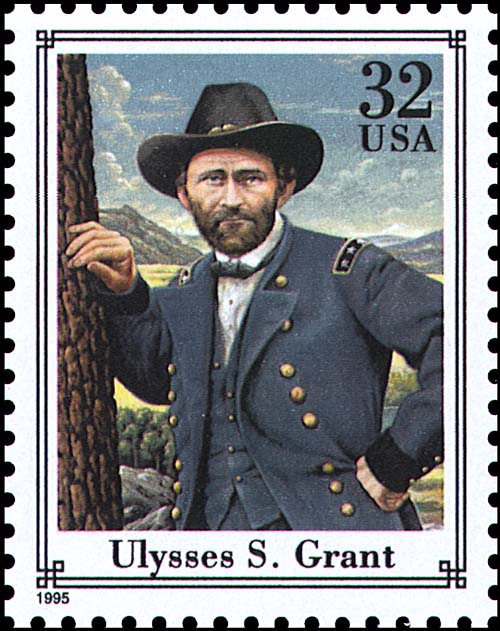 Figure 9. Grant is shown as a military leader on relatively fewer stamps, such as this 32¢ Civil War stamp, Scott 2975d. Click on image to enlarge. 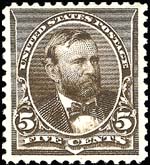 Figure 8. President U.S. Grant appears on many stamps, including Scott 223 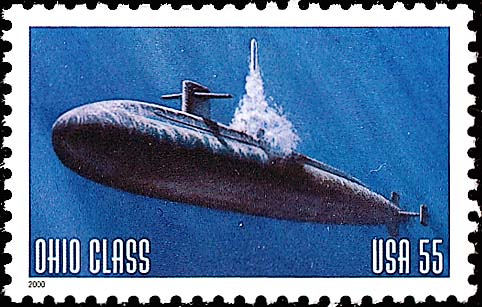 Figure 7. An Ohio-class submarine is shown on this 55¢ stamp, Scott 3375. Click on image to enlarge. 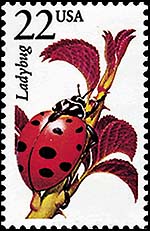 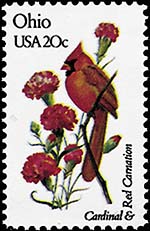 Figure 5. Ohio's state bird, the cardinal, and state flower, the red carnation, are shown on this 20¢ stamp, Scott 1987. 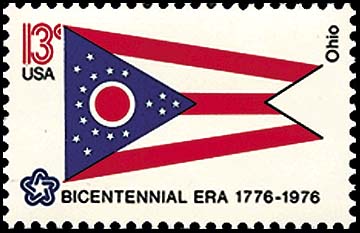 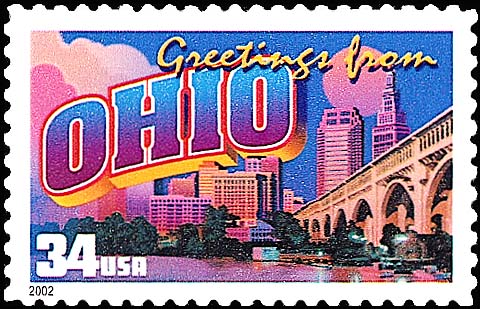 Figure 3. This 34¢ Greetings From Ohio stamp and its 37¢ lookalike belong in an Ohio theme collection. Click on image to enlarge. 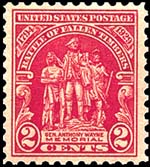 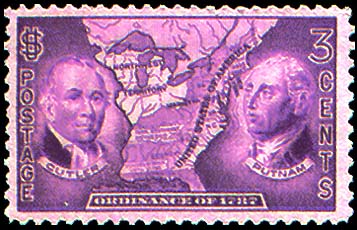 Figure 10. Ohio was once a part of the Northwest Territory, commemorated in 1937 on this 3¢ stamp, Scott 795. Click on image to enlarge. 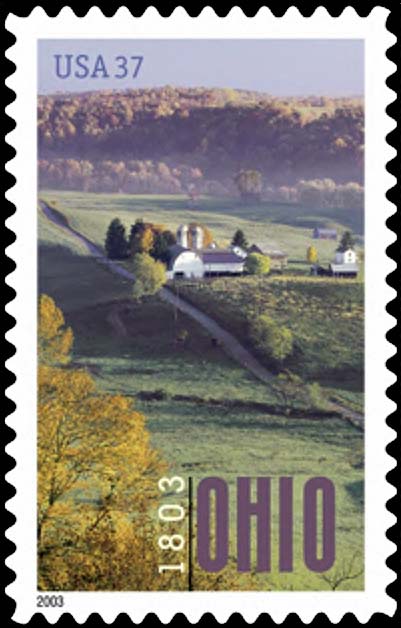 My home state of Ohio is celebrating its bicentennial this year. On March 1, the United States Postal Service issued the 37¢ Ohio Statehood stamp shown in Figure 1.

Figuring out how to organize an Ohio collection is a bit tricky. Two stamps are obvious for inclusion: the new 37¢ one and the 3¢ Ohio Statehood Sesquicentennial commemorative stamp issued in 1953, Scott 1018, shown in Figure 2.

From there an Ohio collection can branch out to people, places, events, flora, fauna and other Ohio-related subjects. Because you are the creator of the collection, its scope is limited only by your imagination.

To begin my collection, I got out my trusty, well-thumbed copy of the Scott Standard Postage Stamp Catalogue, Vol. I. The catalog contains a useful Subject Index of Regular and Air Post Issues. It lies between the regular and airmail stamp listings in the U.S. part of the catalog.

This listing gives one- or two-word descriptions of the stamp subjects along with the Scott catalog numbers. The list is a fantastic tool for finding a stamp subject quickly.

Vol. 2 of the catalog contains a similar subject list for French commemorative stamps.

I made a list of those U.S. stamps whose subjects directly relate to Ohio. This becomes a little subjective, because some subjects, such as the U.S. flag, have a relation to Ohio even though the subject is not necessarily "Ohio."

This is where a collector uses judgment in setting the parameters of the collection. I chose to include only those subjects with a direct and obvious connection to the state.

My first perusal of the subject index garnered 37 subjects but many more actual stamps.

This was largely because of the eight U.S. presidents that Ohio claims as native sons, many of whom have appeared on more than one U.S. stamp.

The presidents are depicted many times on stamps. In fact, Ulysses S. Grant, from my home county of Clermont, has 15 Scott numbers attributed to him.

I broke my list down into several broad categories. These include state facts, historical events and the people of Ohio.

The people category had the largest number of stamps, not only the eight presidents (William Henry Harrison and his grandson Benjamin Harrison, Grant, James A. Garfield, Rutherford B. Hayes, William McKinley, William Howard Taft and Warren G. Harding) but also people from all walks of life such as Annie Oakley, Clark Gable, Thomas Edison, Cy Young, Eddie Rickenbacker and Harriet Beecher Stowe, just to name a few.

Ohio's historical events are not as widely commemorated by stamps, so that aspect of the collection was either going to be pretty thin, or I would have to get creative and find other related stamps to flesh out the story of Ohio.

The easy part was assembling the Ohio facts. I started with the Ohio sesquicentennial stamp of 1953 because its outline map of Ohio makes a good starting point.

The stamp is from a 50-stamp pane, with one stamp for each state issued with a 34¢ face value in 2002. When the letter rate changed to 37¢, the designs were issued again with the new denomination.

The Postal Service has greatly assisted with the next key items in any state collection by issuing sheets of 50 different stamps showing all of the state flags, flowers and birds.

The 13¢ Ohio State Flag stamp, Scott 1649, is shown in Figure 4. This type of flag, which was adopted by the state in 1902, is properly called a burgee. This swallowtail design is unique among U.S. state flags.

The large blue triangle represents Ohio's hills and valleys. The stripes represent roads and waterways and reflect the importance of canals in Ohio's history.

The 13 stars grouped about the circle represent the original states of the Union. The four stars at the peak of the triangle symbolize Ohio's position as the 17th state admitted to the Union.

The red-centered white circle inside the triangle stands for the "O" in Ohio and resembles a buckeye seed.

The 20¢ Red Carnation and Cardinal stamp, Scott 1987, shown in Figure 5, features the state bird and flower of Ohio.

Like many other states, Ohio has named a state mammal, the white-tailed deer, and a state insect, the ladybug.

Both of these critters were illustrated on a sheet of 50 different stamps showing North American wildlife, issued in 1987. The 22¢ Ladybug stamp, Scott 2315, is shown in Figure 6.

Ohio's state reptile (the black racer), its state gemstone (flint), its state fossil (trilobite) and its famous state tree (the buckeye) have no entries in the Scott subject index.

I hope to show these facets of Ohio on stamps, but I plan to wait out the Postal Service until they become part of a 50-state subject sheet or sheets in the future.

Alternatively, I can add stamps from other countries to show what cannot be shown with U.S. stamps, eliminate these subjects from my collection, or chose something beside stamps to illustrate the required topics. Picture postcards make a good alternative.

The choice is up to the person who is assembling the collection.

Sometimes a connection to Ohio is less obvious. In the age of the battleship, U.S. Navy battleships were named for states. The USS Ohio, (BB 12) was launched in 1901.

The sea battles of World War II demonstrated the superiority of carrier-based airpower and the limited utility of battleships. Construction of a second battleship named USS Ohio (BB 68) was begun, but it was never completed.

After the passing of the battleship, the Navy began to name some fleet ballistic missile submarines after states. The USS Ohio (SSBN 726), the first submarine in its class, was launched in 1979. An Ohio-class battleship is pictured on the 55¢ Submarines stamp, Scott 3375, shown in Figure 7.

Ohioans honored on stamps can be organized in several broad categories according to what they are famous for: presidents, sports figures, military leaders, arts and entertainment personalities, and scientists and industrialists.

Some people fall into more than one category and thus present a problem. For example, Ulysses S. Grant was both a general and a president, so does he go in the military category or the president category?

Fortunately, appropriate stamps for both categories have been issued.

Of course, you can eliminate the problem of fitting people into specific categories by arranging the stamps by the dates of birth of the subjects, by the dates of issue of the stamps or even alphabetically. Historical events stamps could certainly be mounted in the collection by date of issue, but it makes more sense to me to mount them chronologically by the event shown on the stamps.

For example, before Ohio became the 17th state in the Union, it was part of the Northwest Territory that also included what is now Indiana, Illinois, Michigan, Wisconsin and part of Minnesota.

To me, it makes more sense to mount that stamp in the collection before the 2¢ stamp issued in 1929 that commemorates the Battle of Fallen Timbers and Gen. "Mad" Anthony Wayne, Scott 680, shown in Figure 11. This battle took place in 1794, well after the formation of the Northwest Territory.

I used Ohio for this column as an example of what can be done and how to do a topical state collection.

Using your home state, some stamps and a little imagination, you can create a uniquely personalized collection. Give it a try. It is fun!

And share the fun with your favorite kid. Remember that in most school districts, fourth grade students study their state history. Stamps can be a great way to make that history come alive.