Surfing through your stamp albums similar to surfing the Internet 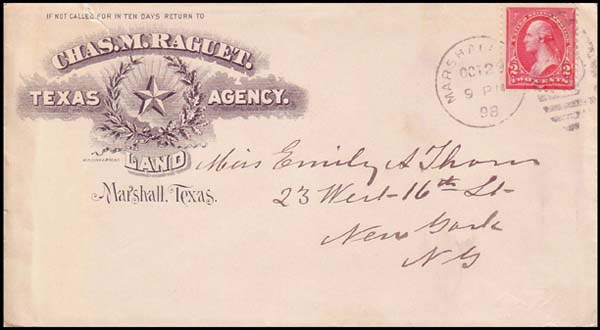 Figure 5. An 1898 illustrated advertising cover that originated at Marshall, Texas, a souvenir of a trip made by the author. 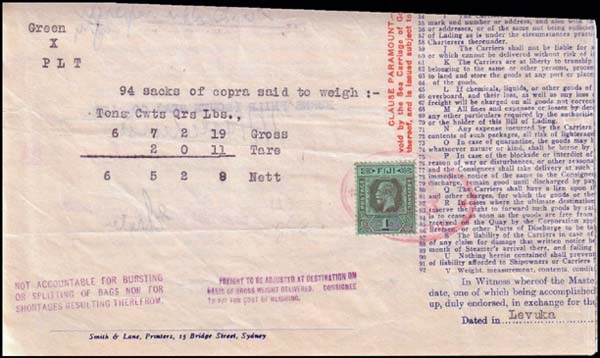 Figure 3. This bill of lading from 1929 bears a Fiji 1-shilling King George V stamp used to show payment of tax. 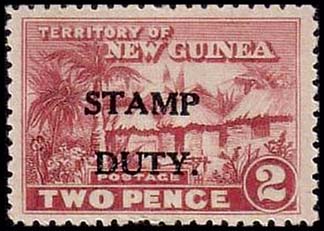 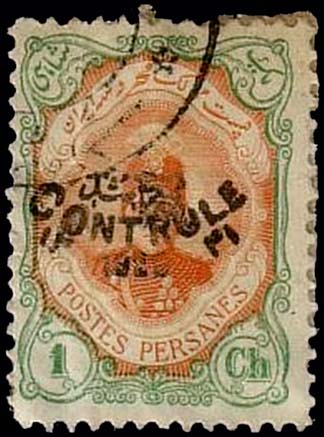 Figure 1. This Persian stamp overprinted "Controle" and "1922" was used to pay the tax on postal cards.
Previous
Next

It is not surprising that I took to the Internet so readily because of my background in computers. I have a longer history of surfing my stamp albums, much like others surf the Internet by clicking from one subject to the next.

My philatelic tastes are eclectic, and I have some pretty strange things inhabiting my stamp albums. They are fun to collect, but what is even more fun is figuring out their purpose and learning their stories.

I recently pulled the overprinted Shah Ahmed stamp illustrated in Figure 1 from an inexpensive mixture. It is from Persia (Iran) and bears an overprint in Persian as well as the word "Controle" and "1922" (Scott 646). Many of stamps of Persia are overprinted or surcharged, and the Scott Classic Specialized Catalogue of Stamps and Covers 1840-1940 listing for Persia is rife with warnings about forgeries and fraudulent issues.

Nevertheless, this is an inexpensive stamp, and the Scott catalog does not tell why it was issued or what the "Controle" overprint meant.

So I dug around the Internet and in some reference material in my philatelic library and discovered that in the 1920s Persia attempted to regulate the sale and use of picture postcards by imposing a tax on their usage.

The "Controle"-overprinted stamp evidently covered the postal tax on a picture postcard.

Now I wonder how difficult it will be for me to find a Persian picture postcard bearing one of these tax stamps. That's the way it is with stamp collecting. One thing inevitably leads to another.

As I was putting the Persian stamp in my pre-1935 album, another overprinted stamp caught my attention. The stamp is a New Guinea 1925 2-penny definitive showing a scene of native huts and palm trees.

The basic stamp without the overprint is listed as Scott 4. The stamp shown in Figure 2, however, is overprinted "Stamp Duty."

The Scott classic specialized catalog lists overprints on this stamp as airmails and an "OS" overprint that stands for "On Service" for stamps used on Official government mail.

The "Stamp Duty" overprint converted this stamp from a postage stamp to a revenue stamp. The Scott catalogs generally do not list revenue stamps, other than those of the United States.

This New Guinea revenue stamps would have been used to show payment of tax on bank checks, deeds, custom forms and other types of official documents. Finding and collecting such stamps on document, the revenue stamp equivalent of collecting a postage stamp on cover, can also be fun.

While looking at this stamp, I remembered a document from Fiji, shown in Figure 3, that I acquired some years ago. It bears a stamp inscribed "Postage and Revenue" that was used for revenue purposes.

I selected the stock book that houses this item and looked at it again. The document bears a 1-shilling Fiji King George V die II stamp (Scott 103). The stamp was used on a bill of lading for 94 sacks of copra (dried coconut) shipped in 1929 by Burns Philp Co. Ltd. in Levuka to Philadelphia, Pa.

The document is completely intact and full of the most extraordinary legalese, including the notice that the steamer upon which the cargo was loaded may be substituted by any other steamer and may "proceed to the port of discharge" in any direction and stop at any ports including through the Suez Canal, Panama Canal, around the cape and more.

As I read this document, I though that it was a wonder that anything ever got to where it was supposed to go.

This excursion in Fijian revenues reminded me of another piece I had, which I quickly located in a stock book.

The payee is the Bank of China through the Chartered Bank in Hong Kong. The draft has an embossed Fijian 2d revenue impressed at the upper right, and the reverse bears a Hong Kong 25¢ Queen Elizabeth II duty revenue stamp with a "B of E" (Bank of England) security overprint.

This item really does not fit into any of my main collections, but I thought it was irresistible when I first spotted it in a dealer's stock.

Sharing storage space in the same stock book with the Fijian bank draft is the cover illustrated in Figure 5.

This 1898 illustrated advertising cover originated at Marshall, Texas. I acquired it a year ago when my husband and I passed through there on our way home from visiting relatives in south Texas.

We had learned that Marshall was a major pottery manufacturing center. We stopped, thinking it might be nice to acquire one of the locally made pottery pieces. While strolling in town, I ducked into an antiques shop where the owner told me Marshall was famous for more than clay pots.

During the Civil War, Marshall served as the capital of the Confederate government of Missouri. This made no sense to me from a geographic standpoint, but when I started thinking about history, it began to come together.

The Missouri Compromise brought Missouri into the Union in 1820 as a slave state. During the Civil War, Missouri's sympathies were split.

Although technically Missouri remained in the Union with a provisional Union government, it also had a Confederate government.

Confederate sympathizers in Missouri, including Gov. Claiborne Jackson and Lt. Gov. Thomas Reynolds, fled to the southwestern part of the state. Eventually Jackson and Reynolds were forced to flee Missouri altogether and established a government-in-exile in Marshall, Texas.

After hearing about Marshall and the Confederacy, I began hunting in the antiques shop for something that uniquely said "Marshall, Texas." My hope was to find something that could be tied to the Missouri Confederacy capital period, but I had no luck there. Instead, I settled for this cover and never did get a Marshall clay pot.

I later did a little research on Charles Raguet of Marshall, Texas. That, too, was an interesting byway.

His elder sister was Anna Raguet, who was wooed by Sam Houston. Houston, a womanizer, was married at the time and had a mistress. It is little wonder that she married Houston's friend Robert A. Irion, who served as secretary of state for the Republic of Texas.

Irion was a physician, who later got into patent medicine production. The medicines were distributed by his brother-in-law Charles M. Raguet, who was a druggist. As fascinating as all of this turned out to be, it would be intriguing to find a Marshall cover from the Civil War era some day. Something else to look for.

This happens to me every time I begin looking at my stamp albums or stock books. I start looking at one thing that triggers something entirely different, from which further exploration and investigation is necessary.

Album-surfing is surely not the most efficient way to enjoy one's collection, but for me it is the best way to have fun.

What's lurking in your albums waiting to be discovered or rediscovered?