Tasmania and its stamps entice in person and in your album 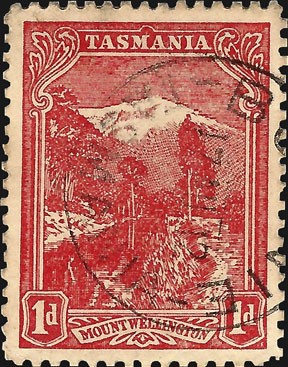 Figure 3. The coarse shading in the design identifies this as Tasmania Scott 103, printed by typography on watermark Crown & Double-lined A paper. 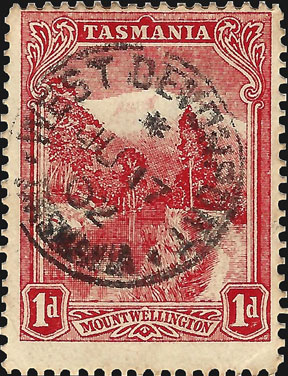 Figure 2. Tasmania Scott 95 was printed by lithography. Watermarks and appearance (see light shading at the mountain peak) help to differentiate stamps of the same design printed by other means. 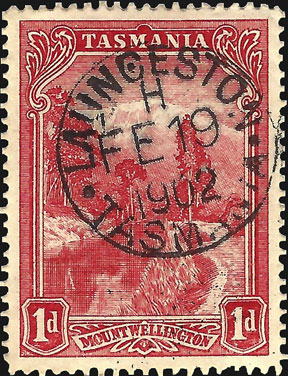 Stamps take us on a global journey without leaving the comfort of a favorite sofa or chair.

Paging through a worldwide collection can have you walking the streets of Tunisia in northern Africa one moment and on the beach of Tuvalu in the South Pacific the next.

As much fun as it is traveling the world via your stamp albums, it is even more exciting to physically visit the places illustrated on your favorite stamps.

Recently I had the opportunity to travel to Australia and spend some time touring the island of Tasmania, just south of Melbourne. I had never been to Tasmania before, but visions of Tasmania's Landscape series of stamps, issued in 1899 when Tasmania was a colony, drifted through my mind.

The Australian federation did not occur until 1901. At that time the British colonies in Australia (Queensland, New South Wales, South Australia, Tasmania, Victoria and Western Australia) became states in the Commonwealth of Australia.

Prior to that, each colony issued its own postage stamps and continued using them until Australia issued its first stamps a century ago, in January 1913.

Tasmania began issuing stamps under its earlier name, Van Diemen's Land, in 1853. Many of the earliest stamps are scarce or rare and can be expensive, but with a few exceptions, the 1899 Landscape series is generally more affordable.

The original eight stamps in the series (Scott 86-93) are beautifully designed recess-printed stamps that are collector-friendly for those with more modest budgets. The exceptions are several booklets that were issued in 1905-08 containing panes of the ½¢ Lake Marion and 1¢ Mount Wellington stamps.

The booklets (Scott 102a and 103a) so rarely come to market that the Scott Classic Specialized Catalogue of Stamps and Covers 1840-1940 does not assign a value to them.

Later printings of the Tasmanian Landscape stamps were made using lithography or typography. There are different watermarks, gauges of perforation, shades of color and printing varieties.

The series is a playground for stamp collectors who love the challenge of finding all or most of the varieties.

The easiest way to start this collection (or one of any other complex stamp issues) is simply to begin slowly with one stamp and work methodically, learning as you add new varieties.

The 1¢ value in the series is a very good entry point.

The 1¢ Mount Wellington stamp is sufficiently complex to be interesting, yet is inexpensive and easy to find. The first version of it was recess-printed by Thomas De La Rue and Sons in London on paper watermarked "TAS" in a repeating diagonal pattern and perforated in gauge 14 (Figure 1, Scott 87).

The Scott Classic specialized catalog calls the color carmine, whereas the Stanley Gibbons catalogs refer to it as bright lake. In other words, both are a shade of red.

The stamp was issued in December 1899.

The second printing of the Mount Wellington stamps was done in lithography by the Victoria Government Printing Office in Melbourne and was released in January 1902 (Figure 2, Scott 95).

The perforations of these stamps gauge 12½. The watermark was a V and Crown (V for Victoria), the same watermark used for stamps of the colony of Victoria.

Victoria's stamps were small in size and the watermark nicely fit them, so that one V and Crown appeared on each stamp. The Tasmanian stamps using the same watermark ended up having two or more parts of an additional V and Crown watermark. These watermarks can be found upright in normal configuration and inverted.

A later 1902 lithographed printing resulted in a number of different shades of red: pale red to bright scarlet with shades in between.

Perforations for this later printing included gauge 11, 12½ and compound perforations of 11 by 12½. The V and Crown watermark is found upright or sideways.

You can see that just this one printing offers many varieties and a good challenge for collectors to chase.

Fast forward to 1905 and a new printing, this time done by typography, again by the Victoria Government Printing Office. A number of different gauges of perforation exist, including 11, 12, 12½ and compound perfs of 12½ by 11, 12½ by 12, and 11 by 12. These typographed stamps exist in a broad variety of shades of red.

The typographed 1¢ stamps have a different watermark, Crown & Double-lined A. The watermark may be upright, inverted or sideways.

Visual differences will help a collector sort through a group of 1¢ Mount Wellington stamps, too.

The lithographed stamps also have a different appearance. The printed image is flat (no raised ink) but fairly well-detailed, except that the shading on the mountain is very light or nearly missing entirely.

In contrast, the typographed stamp has quite heavy, coarse shading on the mountain (Figure 3).

A fourth printing, unlisted by Scott, occurred in late 1912, a few months before the first Commonwealth of Australia stamps were put into use.

This 1¢ stamp was printed by typography on thin paper with white gum and exists with perforations that gauge 12½, 11 and 12½ by 11.

My personal favorite way to collect these stamps is to find the varieties on used stamps that have nice socked-on-the-nose postmarks.

As all collectors know, visiting a country by enjoying the images shown on its stamps is a wonderful journey, added to by investigating the varieties and other collecting possibilities of the issues.

My adventure in visiting Australia and nearby Tasmania was even more fun because of my knowledge of the history of the local postage stamps.

This is a wonderful hobby, whether pursued in the comfort of our homes or around the world.