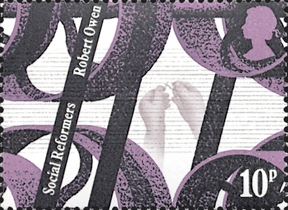 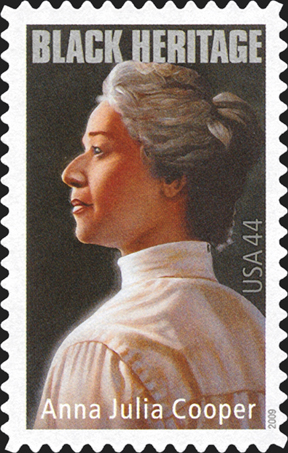 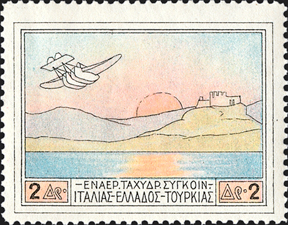 Figure 4. A Greek airmail stamp from a set of four showing different landmarks 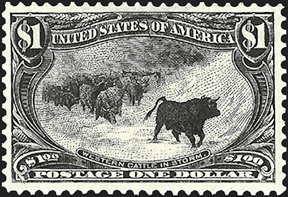 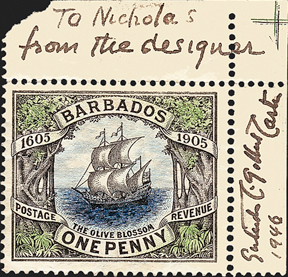 Figure 2. An example of the Barbados Olive Blossom stamp autographed by Lady Carter, the artist of the stamp. 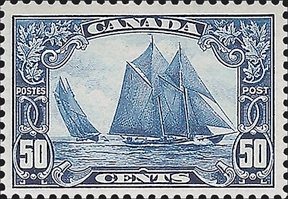 It is always amusing to go to a post office, stand in line and listen to people request stamps from the window clerk.

A savvy window clerk will assert that all of the stamps are pretty. That doesn't always happen and so the ensuing comparative conversation can become quite humorous.

Pretty is in the eye of the beholder. Many years ago my local stamp club had a program called "Pretty Ugly Night," where members brought in the stamp in their collection they thought was prettiest and the one they considered the ugliest. Each member showed their pretty and ugly stamps. They told a little about the stamps and reasons why they thought them beautiful or unattractive. It was a fun program and one that can be emulated by any stamp club.

Many collectors believe Canada's 1929 Schooner Bluenose stamp (Scott 158), shown in Figure 1, is the prettiest stamp ever issued. It is certainly attractive, but is it the prettiest?

A close contender, in my opinion, is a stamp issued by Barbados in 1906. Whereas Canada's Bluenose is a single color and appropriately blue, the Barbados Olive Blossom was printed in three colors — black, green and blue. The colors give the stamp a bit more vibrancy and an exotic look that make it more attractive to some collectors.

The Olive Blossom stamp has an interesting history apart from its good looks. It was designed by a woman, Lady Carter, the wife of Sir Gilbert Thomas Carter. He was a lifetime British colonial administrator in Africa and the Caribbean, who was knighted for his service to the Crown for negotiating treaties that ended a long war in Lagos.

Sir Gilbert was governor and commander-in-chief of the Bahamas in 1903 at the time of his marriage to the former Gertrude Codman Parker of Boston. He was transferred to Barbados the following year and appointed governor and commander-in-chief of Barbados. Lady Carter, an accomplished artist, began designing and building the governor's mansion, Ilaro Court, which still stands in Barbados and is now the prime minister's residence.

Figure 2 illustrates a unique example of the Barbados Olive Blossom stamp (Scott 109). The selvedge of the stamp bears the signature of Lady Carter, who gave this stamp to her stamp-collecting grandson, Nicholas. Much later, Nicholas Carter became president of the American Philatelic Society (2007-08).

Since Canada's Bluenose and the Barbados Olive Blossom stamps are widely considered pretty, do we then conclude that all stamps featuring sailing vessels are pretty? Or are there other pretty subjects found on stamps?

Many collectors who specialize in United States stamps point to the 1898 $1 Western Cattle in Storm stamp (Scott 292) shown in Figure 3.

This was one of nine stamps issued for the Trans-Mississippi Exposition held in Omaha, Nebr., June 1 to Nov. 1, 1898.

The focus of the exposition was promoting and showcasing the development of the American West. The stamps in the series helped the cause by showing exploration, farming, emigration and mining.

In 1926, Greece issued a beautiful set of four airmail stamps showing a flying boat over recognizable Greek landmarks. The stamps were printed by multicolored lithography in such a way as to make them look like miniature watercolor paintings. Figure 4 shows a 2-drachma airmail stamp with a flying boat heading into a setting (or rising) sun off Phaleron Bay (Scott C1). The inscription at the bottom marks the stamp as being used for the Italy-Greece-Turkey route. The four-stamp set was designed by M. Gavalas and printed in Milan, Italy.

We who are traditional stamp collectors tend to favor old intaglio-printed stamps, but because of that, many recent stamps are overlooked. For example, the minute I first saw the 2009 U.S. 44¢ Anna Julia Cooper stamp (Scott 4408) in the Black Heritage series, I was struck by the beauty of her portrait, shown in Figure 5.

Not only does the stamp show an image of a beautiful, mature, accomplished woman but it also conveys the feeling of quiet dignity and competence. For me, this stamp made it to my pretty list along with hundreds of others from nations all around the world.

And this brings us to ugly stamps. Like beauty, ugly is in the eye of the beholder as well. When asked, some collectors will immediately single out a nefarious person from history and single out every stamp bearing a portrait of that individual as being ugly. If the actions of the individual on the stamp were ugly, does that automatically make the stamp ugly?

Some stamps were purposely designed to be unattractive. One such stamp was issued by Great Britain in 1976 to honor Robert Owen, a 19th century social reformer who worked to improve the dreary lives and working conditions of children employed in textile mills.

The Figure 6 stamp (Scott 782), shows the working hands of a small child entrapped in the works of a giant steel loom. It is a creepy stamp, designed that way to evoke an emotion from those who look at and use the stamp.

Designers spend a lot of time getting stamp images just right. Sometimes those images are gorgeous, sometimes not.

No matter what the outcome, every stamp has a story and for that reason every stamp, whether pretty or ugly or something in between, is a great addition to our collections.