The flip side of finding and collecting inverted error stamps 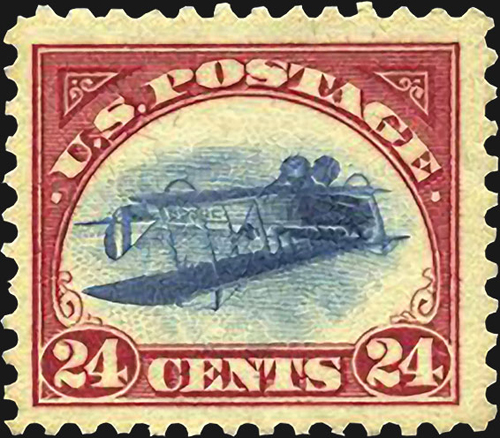 Say the word invert to a stamp collector, and that person will conjure a familiar image of a blue airplane flying upside down in a carmine frame. That kind of invert is an error that was produced accidentally during the printing process.

In the case of that infamous Jenny Invert airmail error stamp (United States Scott C3a) no one knows exactly how it came about. The sheet of bicolor stamps had to pass through the press twice, once for each color. Some think that after the first pass, the sheet was fed the wrong way around. Others think the printing plate was reversed.

Reportedly there were nine sheets of 100 error stamps. Quality control caught all but one, which was sold at a post office on the day of issue to William Robey. The rest is history, and the 24¢ Jenny Invert is arguably the most recognized U.S. stamp. One of these coveted error stamps is shown in Figure 1.

But there are other stamps with inverted centers that do not have the cachet possessed by the Jenny Invert.

Shown in Figure 2 is a Nyassa 75-reis Camels stamp (Scott 33 variety) produced in 1901. The vignette is inverted in relation to the frame. These inverted center stamps were apparently never officially issued, but were printed for sale to collectors. Hence, they are not errors, and are not that expensive to purchase and own.

In 1962, the United States issued a 4¢ stamp (Scott 1203) to honor Dag Hammarskjold, secretary-general of the United Nations, who was killed in a plane crash during a mission to the Congo.

A couple of panes of stamps were discovered with the yellow color inverted. In an unprecedented action, the U.S. Post Office Department reprinted the stamps with the inverted yellow (Scott 1204) so that all collectors could own them. One is shown in Figure 3.

The first printing with the inverted color was an error. For the second printing, the stamps with the color yellow inverted were the product of an intentional misprinting. They are common and therefore easily obtained, even for those on a pauper's budget.

Inverted centers and colors are not the only kind of inverts that have occurred. Overprints and surcharges are often applied to stamps, usually to overcome stamp shortages, mark a change in political status of the issuing nation, or commemorate an event. They are frequently created in haste and printed locally by printers who are not skilled in handling stamps. This sets up opportunities for printing mistakes.

Figure 4 shows a stamp from Cape of Good Hope surcharged "3" (Scott 32a) and issued in 1880. This surcharge was applied to a stamp issued as a 3-penny stamp, but a 1d stamp had been issued in rose, a color that was very similar to the rose-lilac color of the 3d stamp, and thus creating post office confusion. To reduce the confusion, the 3d stamps were overprinted with a black "3" surcharge, some of which were made as errors with inverted surcharges.

Other types of overprints besides surcharges can be inverted, too. Figure 5 illustrates an overprinted Azores 50-reis King Manuel II stamp (Scott 106a) issued in 1910. The stamp has a carmine "REPUBLICA" overprint marking the beginning of the first Portuguese republic. Some of the overprints on some of the denominations were inverted, as shown on the stamp in Figure 5.

Within the world of inverts lurks a few very stealthy kinds that may actually be hiding in your stamp album without you realizing it. Figure 6 shows a Danish 5-ore stamp (Scott 27b) issued in 1879. It is a prime example of this type of stealth invert.

It might not look like an invert, but it is one. The frame is inverted. At first glance – and maybe even at second and third glances – the frame looks the same whether right side up or upside down. But zoom in on either one of the upper corners to spot the difference.

The diagrams in Figure 7 are enlargements of the upper left corner of the type of stamp shown in Figure 6.

The Scott Classic Specialized Catalogue of Stamps and Covers 1840-1940describes the difference between normal and inverted state as this: "The arabesques in the corners have a main stem and a branch. When the frame is in normal position, in the upper left corner the branch leaves the main stem half way between two little leaflets. In the lower right corner the branch starts at the foot of the second leaflet. When the frame is inverted the corner designs are, of course, transposed."

When you look closely at Figure 7, you will notice that within the corner ornamentation is a stem that runs from the scroll at top down to the oval frame. On the right side of that stem is a branch that protrudes from the stem opposite a little leaf. This is the inverted position. In the normal position that branch begins higher and closer to the scroll at the top.

The inverted frames are worth checking in your own collections. Many of them are valued at considerably more than the stamps with normal frames.

The British 2½-penny stamp (Scott 239) in Figure 8 is even stealthier. Does it look like an invert? No, not at all. But dip it in watermark fluid to see that the stamp was printed inverted to the watermark. This is casually called an inverted watermark, but the watermark was there first, so really the entire stamp design is inverted. Sometimes this happens by error when the printer pays no attention to which way the watermark runs in the paper, but some stamps are intentionally produced.