The language of cover collecting: terms H to W 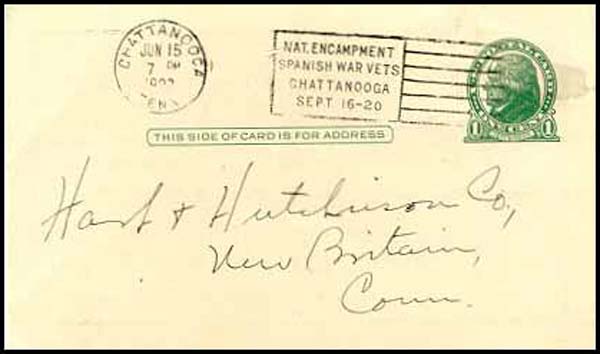 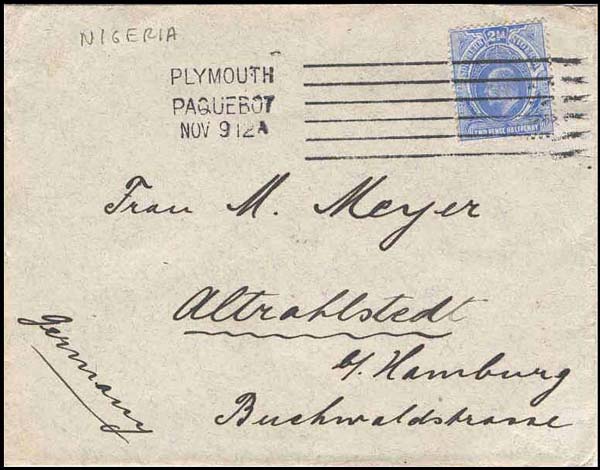 Figure 4. A cover addressed to Germany and franked with a Southern Nigerian 2½-penny King Edward VII stamp tied by a Plymouth, England, paquebot postmark. Click on image to enlarge. 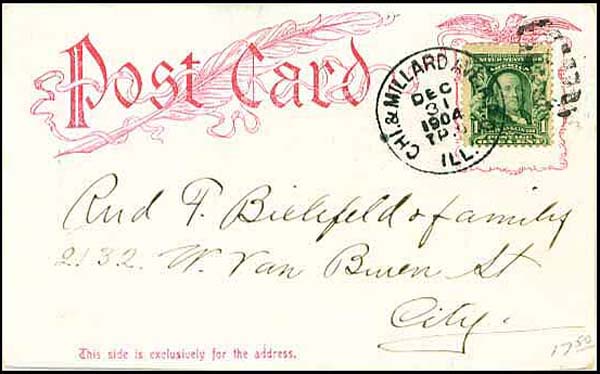 This Refresher Course continues the discussion of cover-collecting terminology begun in the June 27 Refresher course.

Linn's World Stamp Almanac, the Millennium edition of 2000, defines a "cover" as: "An envelope or piece of postal stationery, usually one that has been mailed. Folded letters that were addressed and mailed without an envelope and the wrappers from mailed parcels are also covers."

Handback: A cover that received a postmark or cancellation but that was handed back to the originator without passing through the mail.

A much redirected and returned airmail cover that was mailed Feb. 11, 1957, from Fort Knox, Ky., is shown in Figure 1. It bears two pointing-finger "Return to Writer" handstamps and a "No Record Hqs. T/School" handstamp on the front. There are additional directory service handstamps on the back (not shown).

Indicium: The imprinted stamp of a postage meter or the imprint on postal stationery (as opposed to an adhesive stamp), indicating prepayment and postal validity. The plural "indicia" is sometimes used as the singular. Linn's style is to use the word "imprint" or the phrase "imprinted stamp."

A Chinese 80-fen Flowers postal stationery envelope mailed March 10, 2002, from Urumchi is shown in Figure 2. The imprinted Flower stamp design is the indicium. The registered airmail cover was uprated by the addition of six adhesive Chinese stamps.

Machine cancel: A cancellation, usually including a postmark, applied by a machine, as opposed to a handstamp. The Fort Knox cancellation on the cover shown in Figure 1 is a machine cancel.

Streetcar RPOs were common in large cities from the 1890s through the 1920s. Mail deposited through slots in the sides of special postal streetcars was postmarked, sorted and dropped off as the streetcar traveled its route through the city. A postcard bearing a Dec. 31, 1904, Chicago & Millard Avenue line streetcar RPO postmark is shown in Figure 3.

Sea post office: A post office aboard ship that received and canceled mail while at sea or in port.

Mixed franking: A cover that bears postage stamps from more than one postal authority, and the stamps were accepted for payment of postage or were required.

Mute cancel: A cancellation that does not include a postmark giving the date and place of mailing.

Paquebot: Beginning in 1897, the Universal Postal Union designated letters posted aboard ships at sea or in port as paquebot mail. Paquebot letters are transferred to a postal system at the first available port with postal facilities. There they are postmarked "Paquebot" (other spellings exist) and are placed in the mailstream.

Paquebot regulations allow stamps of one nation to be postmarked elsewhere. The paquebot cover shown in Figure 4 is addressed to Germany and is franked with a Southern Nigerian 2½-penny King Edward VII stamp tied by a Plymouth, England, paquebot postmark and cancel.

Pen canceled: Stamps canceled with an ink pen or marker pen rather than a handstamp or machine cancel. Many early stamps were routinely canceled by pen. A pen cancel can also indicate that a stamp was used as a fiscal. Modern stamps might be pen canceled if a sorting clerk or delivery carrier notices that a stamp has been missed by a canceling machine.

Philatelic cover: An envelope, card or other item franked and mailed by a stamp collector to create a collectible object. Also mail sent by dealers. The item could have carried a personal or business message or not. A nonphilatelic cover is usually one that has carried business or personal correspondence and has had its stamps applied by a noncollector. It is impossible to say that some covers are philatelically inspired or not.

The cover shown in Figure 2 was sent by a Chinese stamp collector and author to an American stamp collector and journalist. It is properly franked and carried personal correspondence. Is it a philatelic cover? Some collectors would say yes, but some others would not.

Postmark: A marking applied to a letter or parcel indicating the date and place it was mailed. The postmark is usually not struck on the stamp, but it can also serve as a cancellation when it cancels a stamp. All the covers shown in this Refresher Course bear postmarks of various types.

Registration label: Printed or adhesive labels or handstamps indicating the registry number and often the city of origin for registered articles sent through the mail.

Stampless cover: A folded sheet or envelope carried as mail before adhesive stamps existed or later without a postage stamp. The term usually refers to covers predating the requirement that stamps be affixed to all letters (in the United States, 1856).

Taxe percue (pronounced TACKS-pair-SOO): An auxiliary marking (sometimes abbreviated "TP"). It is applied, usually by handstamp, to indicate that postage is prepaid. Taxe percue markings are often used instead of postage stamps as a matter of convenience. They are also used when postal rates change rapidly and stamps in useful rates are unavailable.

The registered cover shown in Figure 5 was mailed Dec. 4, 1992, from Brest, Belarus, to Minsk, Belarus. Payment of the postage and registration fee totaling 4 rubles is indicated by the old Soviet 13-kopek imprinted stamp augmented by a taxe percue marking for 3.87rub.

Tied: When a cancellation extends from the postage stamp over part of the cover, the stamp is said to be "tied to the cover" by the cancellation. Being tied to the cover is evidence that the stamp was used to pay postage and was not added later to make the cover more attractive or valuable to collectors. The stamps on the covers shown in Figures 1 through 4 are all tied by postmarks or cancels.

Transit mark: A postal marking applied by a post office between the originating and receiving post offices. It can be on the front or back of a cover, card or wrapper.

Wrapper: A flat sheet or strip open at both ends that can be folded and sealed around a newspaper or periodical. Wrappers can have an imprinted stamp or have an adhesive stamp attached.