Figure 5. Germany is just one country that has issued coil stamps with printed back numbers. The numbers are used by clerks to determine how many stamps remain in the roll.

Figure 4. British coil stamps issued in 1971. The coil strip shows five different stamps with three denominations, sold together for 5 pence. Note that the coils are perforated on all sides.

Figure 3. Two linerless self-adhesive coil stamps were issued by the United States in 1997. The third and most recent linerless example is the 33¢ Fruit Berries coils issued June 16. 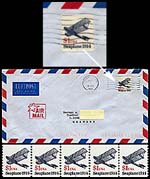 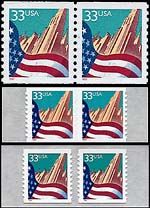 Coil stamps are created and issued by postal authorities around the world for use in vending machines and automatic stamp-affixing equipment, as well as for the personal use of mailers who prefer their stamps in convenient rolls. Most coil stamps worldwide are definitive stamps that return to press again and again as postal needs require.

Last week in Refresher Course we looked at how coil stamps developed throughout the world. Over the years, collectors in the United States developed a preference for collecting coils in pairs, a format that remains popular today.

Long before self-adhesive stamps became popular, many collectors were saving pairs of coil stamps with their general collections, while some were also saving pairs that showed guide lines (from flat-plate printed coils) or joint lines (from rotary-press printed coils) along the perforations between the two stamps. Details of these line pair varieties were described in last week's Refresher Course column.

In 1980 the United States Postal Service began printing tiny Plate number at the bottom of coil stamps at spaced intervals that were determined by the type of printing press used to create the stamps. The first U.S. coil stamp produced under this new system with plate numbers printed on periodic stamps was the 18¢ Flag of 1981, Scott 1891. The plate number appears on every 52nd stamp in the roll.

Just a few weeks after the 18¢ Flag coil was issued, a second 18¢ coil was released, marking the debut of an attractive new definitive series that would catch the imaginations of stamp collectors across the country. This launch of the Transportation series of coil stamps with the issuance of the 18¢ Surrey coil (Scott 1907) led to a growth in collector interest in coil stamps and in the new coil plate numbers.

The collecting specialty soon came to be known as PNC for "plate number coils," and new terminology grew out of the collectors' acquisitions, such as "PNC5," which refers to a strip of five coil stamps with the center stamp bearing the tiny plate number. The PNC5 format eventually became the most widely accepted among coil enthusiasts.

Figure 2 shows the $1 Seaplane coil stamp from the Transportation series, Scott 2468, as a plate number single on cover and as a PNC5. The single stamp on the cover precisely pays the $1 one-ounce airmail rate to Germany in 1996. Both examples show plate number "1."

While a few coil stamps are known with only one or two plate numbers, more have been printed with several different numbers. Multidigit plate numbers with each digit in a different color soon appeared on multicolored coil stamps.

Many coil collectors try to locate examples of every known plate number or number combination to add to their collections.

Collectors who were looking more closely than ever before at their coil stamps began noticing varieties in paper, gum, separations, phosphor tagging and other features that made coil collecting all the more intriguing. A popular collecting group developed, the Plate Number Coil Collectors Club, which is still going strong today. Interested collectors can obtain membership information from secretary Don Eastman, 24 Bemis St., Berlin, NH 03570.

Like lick-and-stick coil stamps, early U.S. self-adhesive coil stamps were spaced apart on liner paper, similar to the 33¢ coil stamps shown at bottom in Figure 1. Later advances brought about coils in full rolls with stamps that were adjacent to one another, separated only by wavy-line die cuts that resembled perforations. The 33¢ coil pair in the center of Figure 1 is an example of this production change.

The Berries coil issue is additionally unusual because it has more than a single design. This is rare among U.S. coils, but it's not necessarily so among coils from some other countries.

Great Britain, for example, has occasionally produced definitive coil stamps sharing the same basic design but with different colors and denominations in a single roll. Figure 4 shows a strip of five British Queen Elizabeth II coil stamps, Scott MH25a, with three different denominations. The five coil stamps add up to 5 pence and sold for that amount when they were issued in 1971.

The five 100-pfennig German coil stamps shown in Figure 5 demonstrate another interesting characteristic: a printed number on the back of one stamp to assist postal clerks when they inventory their stamps. These back numbers are printed on every fifth German coil stamp and first appeared in the 1950s. Many specialty collectors of German coils save mint strips of stamps with the back number at one end (as shown in the illustration).

Coil stamps have a long history and offer the collector a chance to study many aspects of postage stamp production. Collectors can choose to save mint or postally used examples, and many collectors have found specialty areas within the coil collecting field that suit their individual interests.