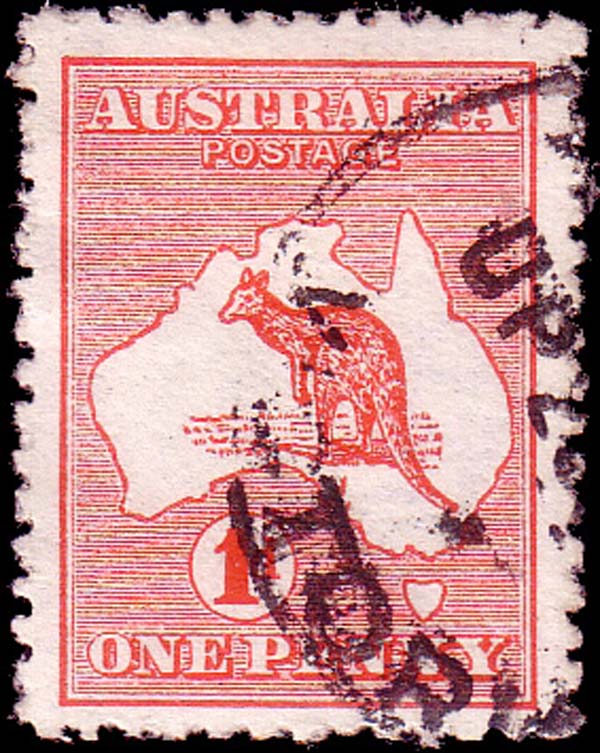 Figure 8. The "UP" in the railway postmark on this Australian 1d carmine Kangaroo stamp indicates that it was postmarked aboard a train bound for Melbourne. Click on image to enlarge. 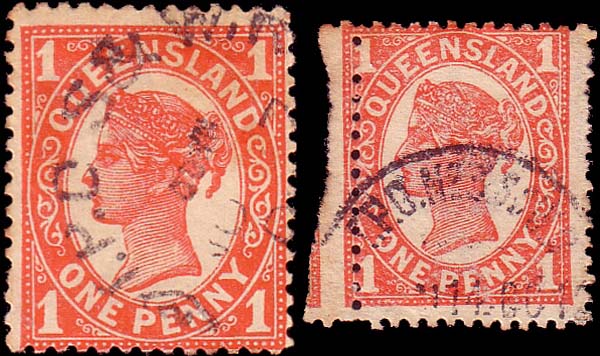 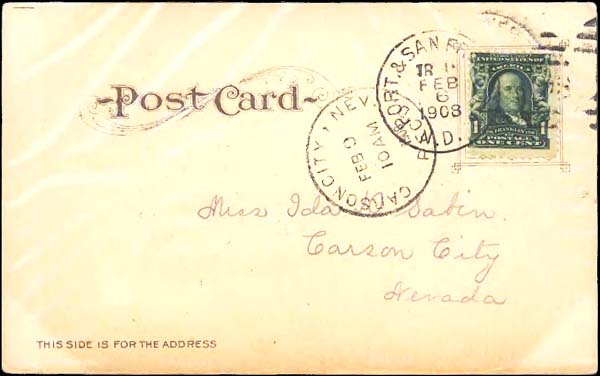 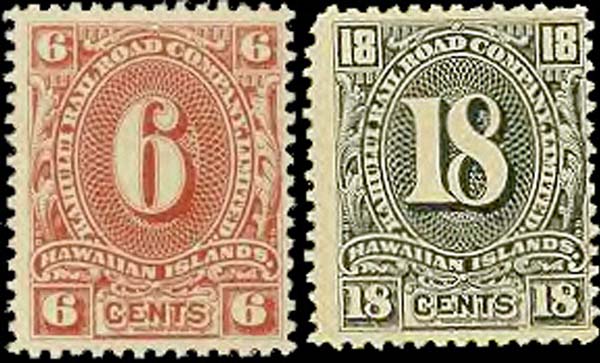 Figure 5. A 6¢ red and 18¢ olive-green Hawaiian Kahului Railroad Co. railway stamps. Unused examples of these two denominations are not difficult or expensive to obtain. Click on image to enlarge. 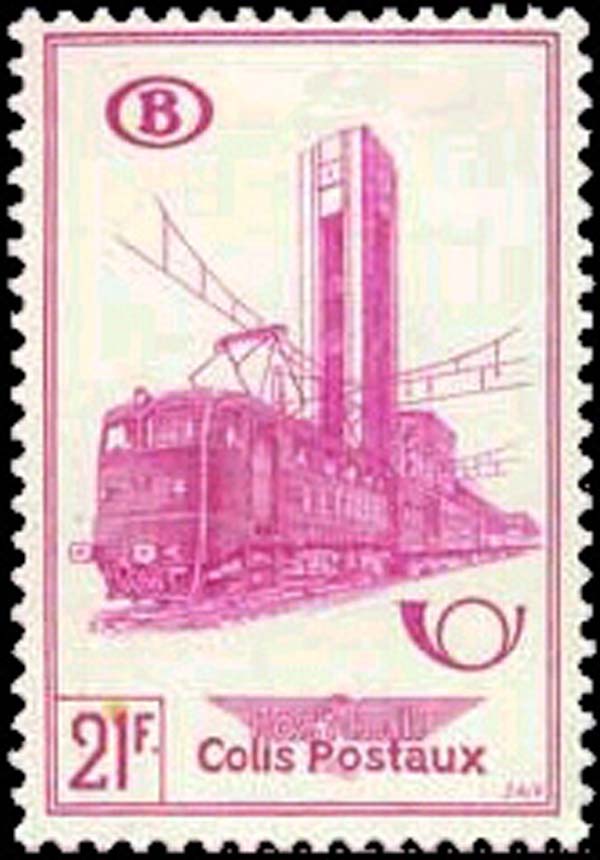 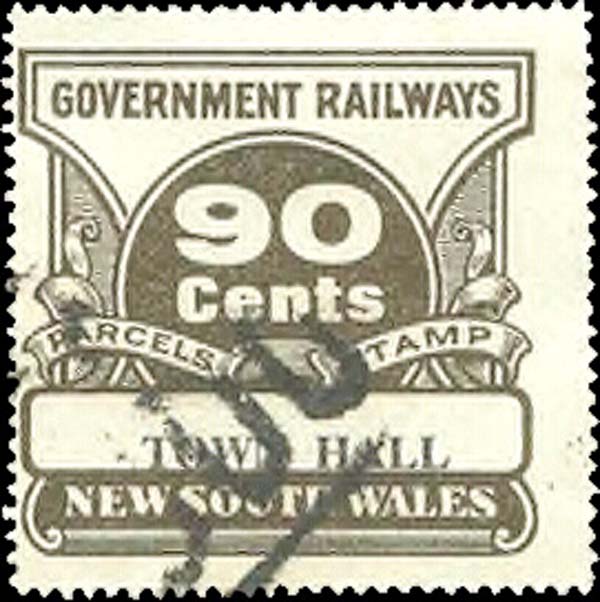 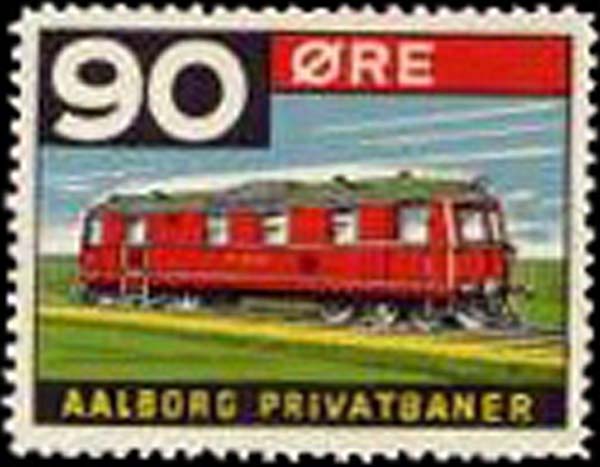 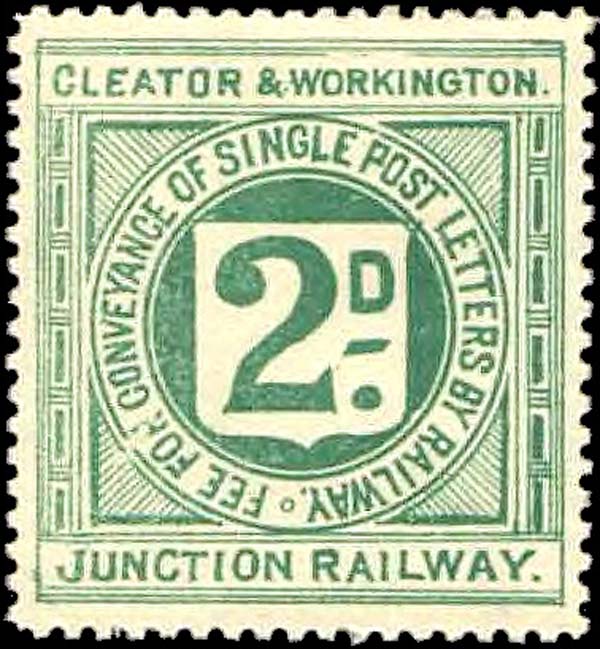 Trains are one of the most popular topical subjects for stamp collectors. Rail fans could keep happily occupied for years with the thousands of topical postage stamps that feature trains, but there is more to collect than postage stamps.<

Railway letter and parcel stamps are also fun and affordable to collect. Railway letter stamps were issued by some railway companies for use on letters carried by the train, especially when the rail company charged an extra fee for this service. Railway stamps are considered to be a type of cinderella stamp.

Railway letter stamps were used in many countries, including Great Britain, Australia, Iraq, Denmark, Netherlands, New Zealand, and many others. Some countries still issue them.

Because private corporations or government-owned railway companies issue these stamps to pay for delivery outside of the postal system, railway letter stamps are not listed in the Scott Standard Postage Stamp Catalogue, but specialized catalogs do exist for many of them.

Railway stamps issued by local or privately owned railways are the equivalent of private and local postage stamps.

Railway stamps began in Great Britain in 1846 when several of the larger railways began using them on parcels.

The post office had a monopoly on carrying letter mail, but in 1891 the British Post Office struck an agreement with 75 British railway companies to carry mail along the railway lines. This established a sort of express mail service that combined postal delivery with rail delivery part of the way.

Railway parcel stamps are similar to the letter stamps and actually predate them, but they were used on parcels.

In many countries, the railway was owned and operated by the government. In these countries, railway stamps were actually government-issued stamps.

Most railway stamps are not Scott-listed because they paid for delivery outside of the postal system.

Scott lists Belgian parcel post and railway stamps because, in addition to paying for railway delivery, they were valid for some classes of parcel post delivery. Scott lists them with a "Q" prefix. Figure 4 illustrates a Belgian 21-franc lilac-rose Electric Train railway parcel stamp, Scott Q364.

You might not think that a relatively small island in the Pacific would have a railway, much less a railway parcel service, but one island did.

In 1874, construction began on the Kahului Railroad on Maui in the Kingdom of Hawaii. The narrow-gauge railroad's route eventually traversed 12 miles and went from the harbor of Kahului to the sugar plantation and refinery in Sprecklesville.

The railroad carried mail as the need arose and without charging a fee. In 1894, stamps were printed in denominations of 5¢, 6¢, 15¢, 18¢, 50¢ and $1 for use on parcels. The 6¢ and 18¢ stamps, shown in Figure 5, are not difficult to acquire in unused condition. The remaining denominations are scarce.

All values are challenging to collect legitimately used. Many of the Hawaiian Islands actually had railroads, although the only one that exists today is the Lahaina, Kaanapali & Pacific Railroad that runs between Lahaina and Kaanapali on Maui. Built in 1970 as a tourist train, it uses the rails from the old Kahului Railroad.

Stamps are only the start of collecting opportunities available for rail fans. Railway post offices are one type of traveling post office (TPO).

The association between mail and railway transportation dates back almost to the beginning of railroads. The first mail to be carried by train was in 1830 on the Manchester and Liverpool Railway in Great Britain.

At first, mail was carried as freight with no sorting en route. Later route agents were assigned by postal authorities to guard and sort mail en route aboard the train, and railway post offices were born.

The first regular sorting of mail en route aboard a train began in September 1838 on rail service between London and Birmingham, England.

The RPOs eventually became actual rail cars purpose-built for sorting and distributing mail. They were attached to longer trains and were staffed by post office employees who would sort and cancel the mail while the train was in motion. Often special cancels were used that identified the letter or parcel as having been carried aboard the train.

If you are ever in Washington, D.C., you should visit the Smithsonian Institution's National Postal Museum. There you can see a United States railway post office car in the atrium of the museum. If you can't visit the museum in person, you can see the mail car on the museum's web site at www.postalmuseum.si.edu/exhibits/2cl_railwaymail.html.

More information about the Railway Mail Service is on the web site.

The first RPO route in the United States began in August 1864, when a rail car designed for sorting and distribution was placed in service on the Chicago and North Western Railroad between Chicago, Ill., and Clinton, Iowa. Other routes were added, and the RPO services expanded to include parcel post in 1913.

According to the U.S. Postal Service, by 1930 more than 10,000 trains were involved in moving the mail. In 1977, the old RPO service was terminated, but some mail in the United States is still carried by Amtrak and on freight trains, although it is no longer sorted and postmarked aboard trains.

The Railway Mail Service also operated aboard some boats and streetcars.

RPO and TPO cancels are highly collectible and add an extra dimension to any train collection. These can be collected either on stamps or on covers.

Covers bearing common TPO or RPO cancels are not particularly difficult to find. Some collectors specialize in a particular rail line, time period, state or country. Specializing increases the challenge and the difficulty.

A postcard bearing a Portland & San Francisco RPO postmark dated Feb. 6, 1908, is illustrated in Figure 6. American RPO postmarks typically include "R.P.O." in the town mark and the letters "RMS" in the killer.

This railway was begun in colonial Queensland in 1867. The rail line ran from Ipswich to Toomoomba, both towns west of Brisbane. Eventually the line extended from Brisbane west to Charlesville.

The two stamps bearing these cancels were found in an inexpensive mixture, proving that treasures can be found for collectors armed with a little knowledge and a lot of patience.

The stamp pictured in Figure 8 also bears an Australian railway cancel. It is barely recognizable as such because only part of the cancel is visible. "VICTORIA" is there at what would be the bottom of the cancel, which pinpoints the stamp as having been postmarked in the Australian state of Victoria. Also clearly visible is the word "UP" that was used on railway postmarks in Victoria to identify trains going into Melbourne. Trains heading out from Melbourne had postmarks reading "DOWN."

More information on TPOs and RPOs can be had from the Mobile Post Office Society. For membership, write to Douglas Clark, Box 427, Marstons Mills, MA 02648.

Whether or not you are a rail fan, adding a few train stamps or postmarks to your album will put your collection on the right track.