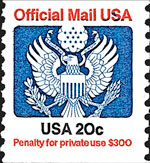 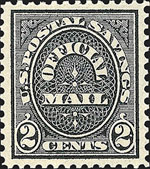 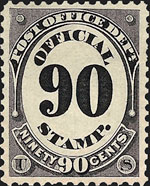 Figure 2. The 1873 Official stamps of the Post Office Department show a numeral of value in the vignette instead of a portrait.

Figure 1. The first Official stamps issued by the United States Post Office Department appeared in 1873 and were similar to the current definitive stamps. Shown at left is the 3¢ postage stamp of 1870, and at right is the 1873 3¢ Justice Department Official stamp.
Previous
Next

Countries throughout the world have issued stamps that are identified in the Scott Standard Postage Stamp Catalogue as Official stamps.

Many countries allow collectors to purchase these stamps for their collections, but most do not permit anyone but authorized government agencies to use these stamps for mailing.Official stamps and postal stationery (stamped envelopes and postal cards, for example) are issued for the exclusive postal use of authorized government offices and officials.

In the Scott standard catalog, these stamps are found with the prefix "O" (for Official) after standard postage stamp listings.

Different countries have used different words to identify their Official stamps. Great Britain used an overprint containing the word "Official" on most, but not all, Official stamps.

Canada, on the other hand, has used an overprint with the initials O.H.M.S. (for On His Majesty's Service) on some stamps, and a single letter G (for Government) on later issues.

Not only are the stamps of different countries identified in different ways, but the reasons they were created and how they are used are often different from one country to another as well.

The Official stamps of the United States were issued during three different periods in American history, and the stamps have distinct characteristics.

They were first authorized by an act of Congress approved March 3, 1873, that required government officials to use stamps on their Official mail.

From the Civil War onward, a growing number of government officials had enjoyed a free-franking privilege, but the system was being abused to the point that the U.S. Post Office found it necessary to establish an alternative that would provide some measure of accountability.

These attractive engraved stamps printed by the Continental Bank Note Co. were issued in 1873 and were strikingly similar to the definitive stamps then in use.

Some of the ornamentation on the Official stamp is different from the postage stamp, and the words "Dept. of Justice" replace the slogan "U.S. Postage" across the top of the stamp.

The Official stamp in Figure 1 has the letters U and S in small star-shape shields at lower left and right.

These inscriptions vary for each department, but these early Official stamps all have the name of the department spelled across the top of the design.

Each stamp shows the same political figure that is depicted on the equivalent postage stamps, with the exception of the Official stamps issued for the use of the Post Office Department. These issues simply show a blank oval inscribed with the words "Official Stamp" and a large numeral indicating the postage value.

Different varieties of 1873 Official stamps appeared in 1879 when Continental Bank Note Co. was consolidated with American Bank Note Co. The new issues were created on soft porous paper rather than the thin hard paper of the original issue.

Some of these classic U.S. Officials can be pretty costly. It is possible to find some of the stamps for just $3 or $4, but other varieties cost several thousand dollars.

Finding the stamps used on cover is a treat, and such covers always should be preserved intact.

The introduction of penalty franks, an imprint warning of a penalty for private use of Official mail, eliminated the need for Official stamps, and by 1884 they were no longer in use.

The first of six new Official stamps was issued in 1910 for use on mail associated with postal savings depositories approved by Congress earlier that year. The stamps were printed by the U.S. Bureau of Engraving and Printing and feature engraved text and numerals against an engraved engine-turned pattern.

This particular government mail program lasted an even shorter time than the first Official mail program. Postmasters were notified that the program was ending in mid-October 1914, and the unused stamps were destroyed.

The Official Postal Savings Mail stamps are best found on cover, but collectors should be able to obtain a full set of six used stamps off cover for less than $100.

The U.S. Postal Service launched a test in 1983 to see if an Official mail system would help improve government postage use accountability. Offices in the U.S. Department of Agriculture and the U.S. Air Force were chosen to use the new stamps, and seven denominations were issued Jan. 12, along with a postal card and a stamped envelope.

Figure 4 shows the 20¢ stamp. The engraved design in red, blue and black shows the Great Seal of the United States, with the phrase "Official Mail USA" printed across the top.

Thirty-five stamps using this design, with some revisions along the way (including a switch to offset printing in 1988), were issued over the course of a quarter century.

"Effective January 27, 2013, Penalty Mail Stamps will no longer be sold by the U.S. Postal Service," the notice reads. "Federal agencies that have remaining stock can still use those stamps until their stock is exhausted."