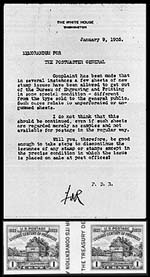 Figure 4. When Pres. Franklin D. Roosevelt learned that collectors were angry about imperforate stamps provided as gifts, he requested that his postmaster general stop the practice. Later special printings resulted in collectibles like the 1¢ Century of Progress pair shown at bottom.

Figure 3. The 1971 reorganization of the United States Postal Service was marked on this first-day cover.

Figure 1. Benjamin Franklin was the first postmaster general appointed by the Continental Congress and the subject for one of the first U.S. postage stamps.
Previous
Next

Like most countries, the United States has a central postal authority that delivers mail and sells postage stamps. Stamps, of course, are actually a type of receipt, proving that the customer paid for the delivery of the mail.

For more than 220 years, the man in charge of the U.S. mail has been the postmaster general.The history of the United States Postal Service has affected stamp collectors in different ways, from seemingly insignificant decisions that changed the face of collecting, to major changes within the Postal Service itself.

In 1775, the Continental Congress named Benjamin Franklin the first postmaster general, with an annual salary of $1,000. Franklin had plenty of experience with the mails, having previously served as joint postmaster general for the Crown — an appointment from the British government.

Though Franklin served as postmaster for less than a year and a half, his status as the first U.S. postmaster general was remembered 72 years later when his image appeared on one of the first two U.S. postage stamps, as Figure 1 shows.

But even before Franklin's appointment, mail was being delivered within the 13 American colonies, and from those colonies to family and friends left behind in Britain.

Though Franklin was appointed Postmaster in 1775, the office of postmaster general was established by the Constitution in 1789. Samuel Osgood of Massachusetts received the position.

The next 58 postmasters were appointed by the president of the United States.

From that point, each new postmaster general has been appointed by the governors of the Postal Service.

On May 16, the tenth individual to receive this appointment was William J. Henderson, shown at right in Figure 2. A story about the new postmaster general appeared on page 2 of Linn's June 1 edition.

When the Postal Service reorganized, it also issued a new stamp marking the change. The 6¢ stamp featured the new Postal Service emblem, a blue eagle perched atop red and blue bars.

To mark the occasion, the Postal Service distributed a free cacheted envelope that collectors could use to create first-day covers. Figure 3 pictures one such cover.

The cachet (pronounced "ka-SHAY") is a decorative image on the envelope. In this case, the symbol of the old Post Office Department was overlapped with the new design.

James A. Farley was appointed postmaster general March 4, 1933, by Pres. Franklin Roosevelt. A little more than a month after his appointment, he was present at the Bureau of Engraving and Printing when production began on the 3¢ Newburgh Peace issue (Scott 727).

In Franklin D. Roosevelt and the Stamps of the United States 1933-45, Brian C. Baur wrote, "The presses were then stopped temporarily, and the first panes of 100 stamps were turned over to the postmaster general, who stated that the president had asked him to purchase a pane for him."

Farley made it a habit to similarly purchase sheets of new issue stamps for the president as well as for other government officials and even his own children.

What stamp collectors were dismayed to learn was that the sheets Farley bought were imperforate, ungummed varieties. Collectors considered such items spectacular rarities, and were incensed that government officials were given these imperforate sheets as gifts.

Altogether 20 stamp issues had been created in this fashion. When collector outrage grew, the president informed Farley in a memo (Figure 4, top) that he should "discontinue the issuance of any stamp or stamps except in the precise condition in which the issue is placed on sale at post offices."

To appease collectors, the Bureau printed collector versions of these same 20 stamps in imperforate, ungummed condition, and they were placed on sale March 15, 1935. The Post Office Department was swamped with requests for these special printings, and the 20 stamps, now cataloged as Scott 752-71, have come to be known forever as "Farley's Follies."

Many collectors have evidence of these special printing sheets in their collections, often in the form of gutter pairs, such as the 1¢ Century of Progress issue shown at the bottom of Figure 4.

The "gutter" is the margin paper between two panes on a press sheet.

The regular issue for this stamp, Scott 730, is an imperforate, ungummed souvenir sheet (a special issue for an exhibition), consisting of 25 stamps with printing around the edge of the souvenir sheet.

Collectors can tell that the pair shown in the illustration is from a Farley special issue because the border printing appears in the gutter between the two stamps.

Other postmasters have left their mark on the stamp hobby in many ways. During the tenure of Marvin Runyon, collectors saw a recall and new printing of the Legends of the West stamps, along with uncut commemorative stamp sheets placed on sale for the same issue.

Imperforate varieties of otherwise perforated stamps (Bugs Bunny, Sylvester & Tweety) and an explosion of self-adhesive stamps were also experienced while Runyon was in office.

For collectors, the installation of a new postmaster general is always a time of interest, to see if new policies formed during his administration will affect the stamp issues of the United States.