United Nations opens up a world of collecting 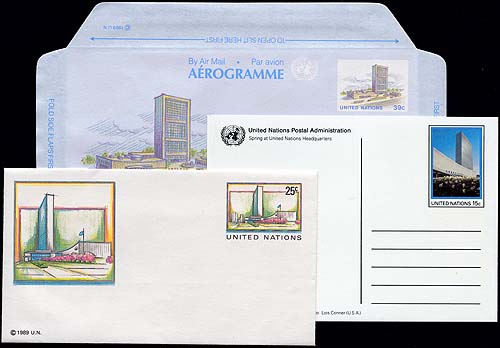 Figure 4. Postal stationery items issued by the United Nations Postal Administration in 1989 (from top): a 39¢ aerogram, a 15¢ postal card and a 25¢ stamped envelope. Click on image to enlarge. 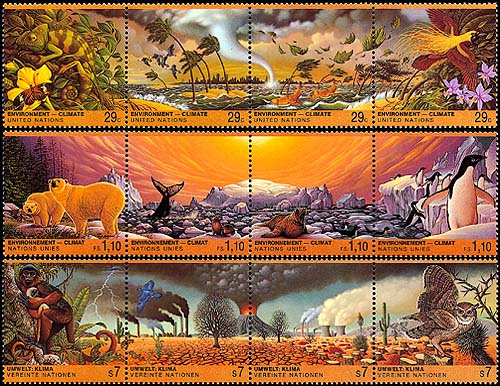 The postage stamps and postal stationery of the United Nations do not serve the postal system of a single country, as most stamps do. Instead, U.N. stamps carry mail sent from the offices of an international organization that represents many different countries and billions of people all over the world.

The stamps of the United Nations often feature designs that promote the world causes of peace and justice, international cooperation, environmental and health issues, assistance for developing countries, and similar concerns. As an example, Figure 1 shows three U.N. Environment-Climate issues of 1993. More recently, the United Nations issued three sets of four stamps April 6 in its ongoing Endangered Species commemorative series. Details of these newest stamps were published on page 1 of the April 3 issue of Linn's Stamp News.

Most of today's United Nations stamps are issued in three versions for three different U.N. offices, as illustrated by the stamps in Figure 1. Stamps for use at United Nations world headquarters in New York City are denominated in U.S. dollars and cents. The postage rates correspond with United States rates, so a letter mailed to a U.S. destination from U.N. headquarters in New York cost 29¢ in 1993 and costs 33¢ in 2000. These stamps are all inscribed with the name, "United Nations."

Stamps for use at the U.N. European office (also known as Palais des Nations) in Geneva, Switzerland, are denominated in Swiss francs and centimes, and are inscribed with the name of the organization in French: "Nations Unies."

The third set of stamps are created for use at the U.N. Donaupark Vienna International Center or the International Atomic Energy Agency in Vienna, Austria. These issues are denominated in Austrian schillings and groschen, and are inscribed in German "Vereinte Nationen." All of these stamps are listed and described in the Scott Specialized Catalogue of United States Stamps & Covers, and in Vol. 1 of the Scott Standard Postage Stamp Catalogue.

While the United Nations does have its own postal administration, which is responsible for the creation and distribution of these stamps, mail sent out franked with these issues is eventually handled by the postal authorities of the United States, Switzerland and Austria for the respective offices. The stamps of the United Nations cannot be used outside of U.N. offices, however. Mail bearing a stamp from the New York U.N. office must be deposited into the mailstream at U.N. headquarters on Manhattan's East Side, not in a U.S. mailbox or a U.S. post office elsewhere in New York.

It was during the final years of World War II that the concept of a formal organization dedicated to peace and international cooperation was advanced by the leaders of the Allied powers. The United Nations charter was developed and approved in 1945 with 51 nations as original members. By the beginning of 2000 that membership had increased to 188 nations.

Even before the U.N. charter was adopted, mail sent from the first United Nations information office in New York City was franked with a postage meter stamp bearing the phrase "In War and Peace UNITED NATIONS." An example of this meter stamp is shown in Figure 3, on a 1945 cover addressed to Cincinnati, Ohio.

In 1947 the United Nations began discussions with the United States Post Office Department to establish a United Nations Postal Administration with mail service operations handled by the USPOD. An agreement was signed in 1951 establishing the UNPA and leading to the issuance of the first U.N. adhesive postage stamps Oct. 24, 1951. Postage meter stamps previously marked "New York, N.Y." were converted to read "United Nations, N.Y."

In 1950 the U.N. European office began using Swiss stamps that had been overprinted with the words "NATIONS UNIES OFFICE EUROPEEN." In 1955 a set of six Swiss Official stamps were released with new designs for United Nations usage, and another dozen or so stamps were created and used until 1969. All were inscribed "Helvetia," the name for Switzerland on Swiss postage stamps. These Swiss Officials are identified as Switzerland Scott 7O1 through 7O39 and are listed near the end of the Switzerland listings in the Scott catalog.

In 1969 the United Nations issued its own stamps for the Geneva office. A set of six stamps issued Aug. 24, 1979, were the first to appear for use in the Vienna offices. The Donaupark complex is pictured on two of those stamps, the 4s and 6s values (Scott U.N. Vienna 3 and 5).

The United Nations Postal Administration will mark 50 years of existence in 2001, and it continues to regularly issue stamps to carry mail from its three primary international offices and to fill the needs of stamp collectors worldwide.

Along with stamps and postal stationery, the collector can obtain from UNPA inscription stamp blocks that include a U.N. margin inscription, special souvenir folders and souvenir cards, cacheted first-day covers, booklets and more.

Additional information about the U.N. stamp program is available on the Internet at www.un.org/Depts/UNPA/ or by writing to UNPA, Box 5900, Grand Central Station, New York, NY 10163-9992.

Stamp collectors have many options available when they begin to collect U.N. stamps. If they choose to collect only the UNPA issues, several comprehensive stamp albums are available for such an effort. Once involved in U.N. collecting, however, it is possible for the collector to branch out into any of the many fascinating aspects of U.N. postal history.

Collectors have also sought examples of mail from U.N. peacekeeping forces when they are stationed in trouble spots around the world. New discoveries and unusual varieties turn up regularly and are documented by collectors in the Journal of United Nations Philatelists. The December 1999 issue, for example, included an article by Gale G. Raymond illustrating the cover shown here in Figure 5. The cover bears stamps from Thailand, apparently posted from a U.N. office in Bangkok, and struck with a previously unknown United Nations postmark. The postmark date is not legible, but both of the stamps on the envelope appear to be 1997 issues.