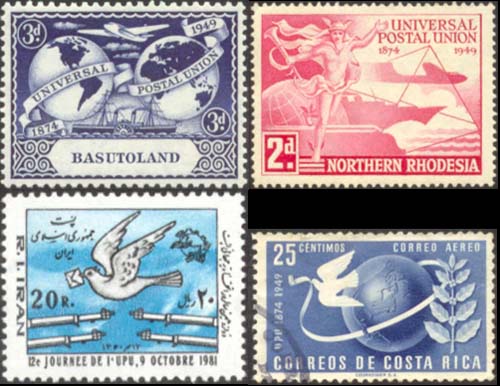 Many hundreds of stamps from member nations have been issued to commemorate the UPU. Here are four from Basutoland, Northern Rhodesia, Iran and Costa Rica. 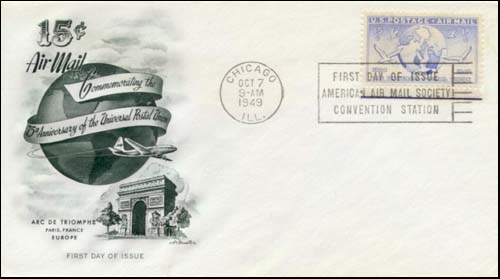 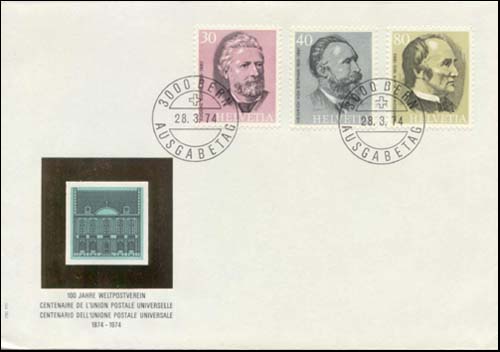 This United States 39¢ airmail letter sheet with first-day cancellation, Scott UC62, honors Montgomery Blair, one of the early proponents of a world postal group.
Previous
Next

On Oct. 9, 1874, representatives of 21 countries signed the Treaty of the General Postal Union in Bern, Switzerland. This was not a treaty that ended a war, but it did end many complicated problems for mail delivery around the world.

Mail then did not travel quickly across the earth. It traveled from border to border, moving toward its destination only if the postal authorities in each country accepted that the transit charges had been paid according to that nation's rules and whatever treaties were in effect then with the sender's country.Imagine writing a letter to Australia in 1873. At the post office window, you are told that your half-ounce letter could cost anywhere from 5¢ to $1.02, depending on which of the six sea routes it might take and on the nationality of the ship that carried the letter. Worse yet, the rates and rules were changing frequently, as new postal treaties were negotiated between various countries, but never for all of the countries at the same time.

This bureaucratic tangle created the wealth of wonderful postal history covers available to happy collectors today, but at the time it had to have been a frustrating and tedious situation for mailers.

Sir Rowland Hill's domestic postal reforms in Great Britain in the late 1830s (in the course of which he incidentally introduced adhesive postage stamps in 1840), provided a real boost to those who had been agitating for improvement of the international postal situation.

If one country could get things straightened out, there was hope for the rest of the world. A German, J.L. Klueber, had called for a universal postal institution as early as 1811, but no one answered until economist Johann Herrfeldt, also a German, published articles in 1841 and 1842 supporting what he called "a universal postal union."

An Austro-German Postal Union was formed in 1850, the first community of German-speaking postal administrations regulating postal traffic by means of a treaty. This union lasted for only a dozen years, but even its limited success made the idea of international postal cooperation more widely known and accepted.

In August 1862, U.S. Postmaster General Montgomery Blair wrote to the secretary of state about the "many embarrassments in foreign correspondence" that existed because of the complexity of the rules. He said that the only remedy was "by international concert of action."

Amazing as it may seem today, federal officials acted quickly and contacted other governments suggesting that a postal conference should be held. Sixteen countries replied, and France offered to act as host to a conference in Paris in May 1863.

Blair and President Abraham Lincoln are depicted in the design of the imprinted stamp of the first-day-canceled airmail letter sheet, Scott UC62, shown in Figure 1. The air-letter sheet was issued in honor of the UPU congress held in Washington, D.C., congruent with the World Stamp Expo 89 show.

Some rates were simplified as a result of the Paris conference, but no binding treaties were signed. The project languished until 1868. In that year, Heinrich von Stephan, the director of posts of the North German Confederation, urged the German government to call a congress that would consider a conclusive postal treaty to provide the world with what Rowland Hill had done for Great Britain.

Von Stephan's "Note on the Universal Postal Congress" proposed a single territory for the postal traffic of all the countries signing the treaty with uniform rates based on weight increments and charges to be collected by one postal administration instead of by every country that handled the mail piece.

Von Stephan soon after became the head of the German Postal Administration. He worked out a draft treaty that was approved by the representatives of the 21 countries in Bern, Switzerland, in 1874. The new entity was designated the General Postal Union. The name was changed at the next congress, held in Paris in 1878, to the Universal Postal Union, the name it retains today.

Von Stephan, Blair and Eugene Borel, share honors as UPU founders, on a set of Swiss stamps, Scott 591-93, issued in 1974 on the occasion of the UPU's centennial. A first-day cover of the stamps is shown in Figure 2, with a cachet (added design) depicting UPU headquarters in Bern.

Current membership in the UPU is 189 member countries. Recently independent East Timor will likely become the 190th member. A list of member nations is available at the UPU web site at www.upu.int. The UPU proudly claims to be the second oldest international organization (the International Telecommunications Union is the oldest). The UPU's headquarters are in Bern, the Swiss capital.

In 1948 the UPU became a specialized agency of the United Nations. U.N. member countries may readily join the UPU. Sovereign countries that do not belong to the United Nations may become UPU members if approved by a minimum of two-thirds of the UPU members. In its own words, the UPU "is the primary forum for cooperation between postal services and helps to ensure a truly universal network of up-to-date products and services."

The UPU is an advisor, mediator, liaison and a source of technical assistance. It sets rules for international mail exchanges but "does not interfere in the matters that fall within the domestic domain of national postal services," for example, setting postage rates, deciding which and how many stamps to issue, or how to manage postal operations.

The UPU is financed by contributions from members' postal administrations. Thomas E. Leavey, a former assistant postmaster general of the United States, is in his second five-year term as director general of the UPU. The UPU holds congresses at regular intervals to consider the acceptance of new members and to discuss and adopt new rules to meet changing situations in the postal world.

The UPU has been in the stamp press frequently in recent times because of its stand against what it considers illegal stamp issues that threaten post office revenues and confuse and deceive stamp collectors. These items are not legitimate postage stamps issued under the auspices of postal authorities, but labels that look like stamps and that are sold solely for the profit of the producers.

The UPU, European stamp dealers and stamp journalists, continental catalog publishers, and the International Federation of Philately or FIP founded a group called the World Association for the Development of Philately. The WADP developed the WADP Numbering System late last year. It assigns its own numbers to stamps issued by participating postal administrations that pay a fee for the service.

As of late May, 95 of the 189 UPU member nations are participating in the WNS numbering system. The most recent U.S. stamp issue relating to the UPU, a 45¢ commemorative stamp, Scott 3332, shown in Figure 3, was issued Aug. 25, 1999. Earlier U.S. issues honoring the UPU include a set of three airmail stamps, Scott C42-44, issued individually in October and November 1949, for the organization's centennial.

The first of the three was issued at a convention of the American Air Mail Society. A first day cover for the 15¢ airmail stamp, Scott C43, is shown in Figure 4. The stamp depicts five doves winging around the globe carrying stamped letters in their beaks. This is an allusion to the UPU's logo, which shows five gauzy creatures, including the messenger god Mercury, circling the globe and passing letters hand to hand. This image appears on many UPU topical stamps.

The next U.S.-UPU issue was an eight-stamp set (Scott 1530-37) for the centennial in 1974, depicting famous works of art with the theme Letters Mingle Souls. Four imaginary space vehicles appear on a set of airmail stamps issued in 1989 in conjunction with the UPU congress and the World Stamp Expo 89 show. The theme of this set (Scott C122-125) is Future Mail Transportation.

Many stamps relate to the UPU, its founders, its congresses and its anniversaries, but acquiring a complete UPU topical collection is still attainable.

Switzerland issued the first UPU commemorative stamps in 1900 (Scott 98-100) to mark the 25th anniversary of the organization. Representative UPU stamps from Basutoland, Northern Rhodesia, Iran and Costa Rica are shown in Figure 5.

No matter what your opinion may be of modern mail service, domestic or foreign, there's no question that it is much simpler to use today than it was 150 years ago. For this we must thank the visionary founders of the Universal Postal Union.