Use stamps to connect with other interests 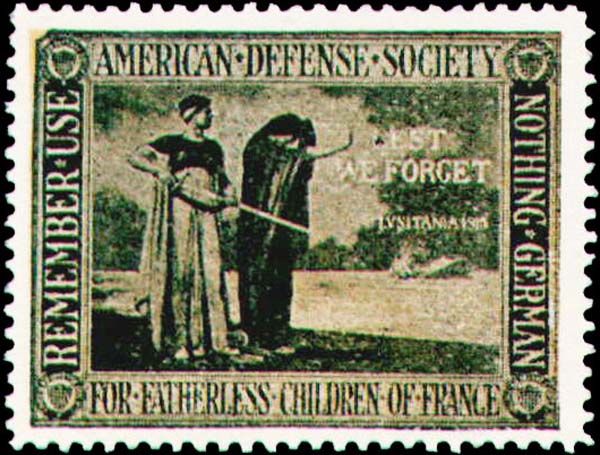 Figure 5. This label (cinderella stamp) issued by the American Defense Society memorializes the sinking of the Lusitania and urges Americans to "Use Nothing German." Click on image to enlarge.

Figure 4. This Bloomington, Ill., stampless cover was postmarked June 18. The postmark does not give the year. Click on image to enlarge. 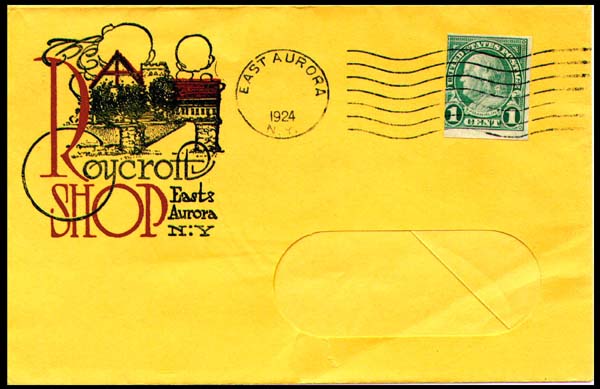 Figure 3. This Roycroft illustrated advertising cover postmarked in East Aurora shows one of the Roycroft buildings. Click on image to enlarge. 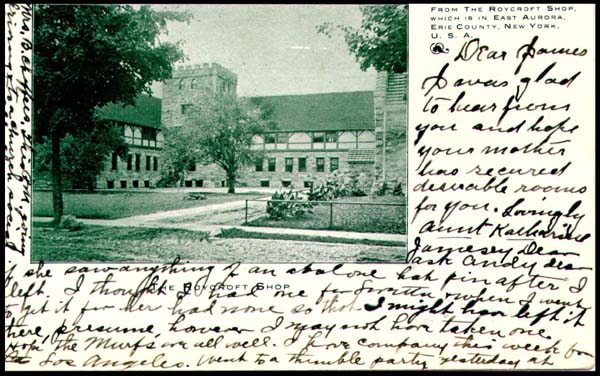 Figure 2. The picture and message side of a Roycroft Shops picture postcard, with meandering message. The address side of the postcard is postmarked at East Aurora, N.Y., in 1907. Click on image to enlarge. 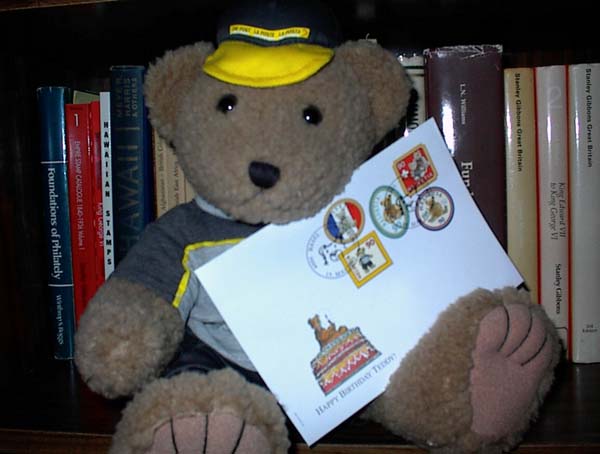 Figure 1. A teddy bear from Switzerland, dressed in a Swiss postman's uniform, holds a cover franked with Swiss postage stamps that celebrate the teddy bear's 100th birthday. Click on image to enlarge.
Previous
Next

One of the most surprising aspects of collecting stamps is that you can almost always find connections to other hobbies and interests you might have. Stamp collecting is such a broad field that branching off into something else is not only possible, it is probably inevitable.

His portrait appears on stamps from countries as diverse as the United States and the Soviet Union. The subjects of his books and stories are illustrated on stamps.

I have a small collection of teddy bears. I don't consider this a major interest, nor do I proclaim to know a great deal about antique teddy bears or modern collectible bears. I only know that I like them.

While ordering new teddy bear stamps from several countries, I came across a two-part offer from the Swiss Post that was irresistible: a cover bearing Switzerland's new Teddy Bear stamps and a stuffed bear dressed in a Swiss postman's costume.

As shown in Figure 1, they now both live happily on one of the bookshelves that holds my stamp library. That Swiss bear also accompanied me to the first-day-of-issue ceremony for the U.S. 34¢ Teddy Bear stamps that took place in Atlantic City, N.J., in 2002.

My bear seemed to be the only foam-filled attendee at the stamp ceremony.

But teddy bears and Mark Twain are easy subjects to pursue to make a stamp collecting connection.

The more unfamiliar the interest, the more difficult it is to find appropriate philatelic materials that connect.

I have harbored a 35-year interest in the American arts and crafts movement that manifested itself around the turn of the 20th century.

Specifically, I became interested in crafts produced by a small community of artisans called Roycroft. Roycroft operated in East Aurora, N.Y., from the mid-1890s to the 1930s.

Roycroft produced hand-bound books; hand-hammered decorative objects in copper, brass, silver, and gold; furniture; leather goods; and other artist-produced crafts. They were sold in the finest shops and department stores in North America until the arts and crafts movement faded and Roycroft goods were relegated to the backs of cupboards.

Eventually I wondered what sort of Roycroft-related philatelic material I could find to go along with the odds-and-ends crafts I have collected.

This remains an ongoing process, and I can tell you it has been pretty frustrating.

Some philatelic items were easy. The Roycroft campus was a popular destination for the intelligentsia of the era, so much so that a hotel was constructed to house all of those who came to see and hear their guru, Elbert Hubbard.

Picture postcards showing all of the various Roycroft buildings, shops, hotel, lecture hall and farm are abundant. One of them is shown in Figure 2. Those that are postally used bear a variety of East Aurora postmarks.

Roycroft, in addition to being an artist commune, was also a business with a fairly extensive product line. These products were promoted through direct mail, magazine ads and word of mouth. The net result was business correspondence, marketing pieces, and mail orders, some of which still exist.

Illustrated commercial covers not only serve as attractive additions to any Roycroft collection but also reinforce the point that this idiosyncratic commune was also a successful business enterprise. A Roycroft illustrated advertising cover showing one of the Roycroft buildings is shown in Figure 3.

No Roycroft product has ever graced a postage stamp. I keep hoping the new United States American Design definitive series that has honored the Tiffany lamp (Roycroft was a contemporary of Tiffany) will correct the oversight. Neither has Roycroft's founder Elbert Hubbard appeared on a postage stamp.

How do you make a stamp collecting connection when you work against such odds?

It is easy to be discouraged by a lack of philatelic connections if you are trying to marry a hobby not well represented on stamps. So you need to get really creative and look for associative material.

By associative material I mean items that have no direct connection to the subject, but still relate in some way. I'll give you an example using Elbert Hubbard.

The ideal associative item would be a cover postmarked on the correct date from Bloomington. It is not impossible to find such a cover, but that would be a little like finding the proverbial needle in a haystack.

So instead I set my sights on finding a Bloomington cover from 1856. The idea was that it is easier to find something within a whole year than it is to find a specific date within that year.

The result of that search is the folded letter illustrated in Figure 4.

More than likely it is 1851, because the Post Office Department required that prepaid letters use postage stamps beginning Jan. 1, 1856.

In any case, I'm closer to the right day than I figured possible, even if the year is questionable. I'll keep looking, but for now this will have to do. Sooner or later I'll find an 1856 Bloomington, Ill., cover and buy it.

The end of Hubbard's life is much easier to deal with, because he was one of the 1,201 passengers who perished in the sinking of the Lusitania in 1915.

During World War I, the Lusitania was en route to Liverpool, England, from New York when it was torpedoed and sunk May 15, 1915, by a German U-boat off the coast of Ireland.

There are many Lusitania collecting connections possibilities: pieces of mail that were carried aboard Lusitania; picture postcards that show the ship; and even the label, shown in Figure 5, issued by the American Defense Society remembering the Lusitania victims and urging Americans to "Use Nothing German."

Some purists would look askance at associative material and say it is a cop out.

Given the choice of nothing at all or something associative, I will opt for the associative material every time. Part of the fun in collecting is being creative and figuring out what fits.

The other part is finding it. Trust me: even though that Bloomington, Ill., cover is not a perfect fit, I'm pretty pleased to have found it.

A fun thing to do with stamps is to select a few that relate to a friend's or relative's hobby and frame them, and then give them away as a gift.

I priced wooden frames at a local discount store and found I could buy a 5-inch-by-7-inch or an 8-inch-by-10-inch frame with glass and a double mat for less than $5.

If I attach a few stamps within the mat, it makes a very attractive presentation.

A friend who judges dog shows receives a frame with a few winsome puppy stamps. Another friend who collects cookbooks and recipes gets one with food, and if I am feeling especially creative, I will write out a favorite recipe and use appropriate stamps to illustrate the ingredients.

The result is an inexpensive and yet highly personal gift. It is an easy way to marry the stamp hobby with another hobby and promote stamp collecting at the same time. You don't know what will happen until you try.

When you think about it, stamp collecting isn't just one hobby. It is every hobby. No wonder it is so engrossing.