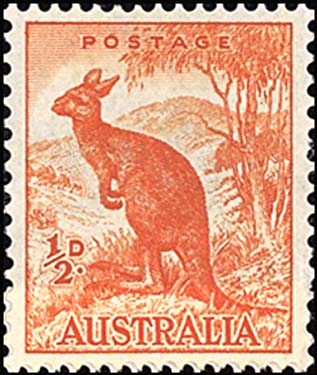 Figure 8. This ½d orange Kangaroo stamp, Scott 166, was often used to pay the WWII war tax in Australia. Click on image to enlarge.

Figure 7. A 3¢ violet Victory and Flags of the Allies stamp, U.S. Scott 537. One cent of the face value went to pay the war tax. 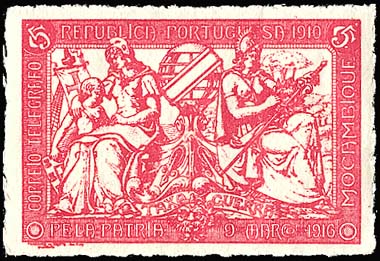 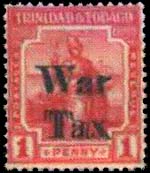 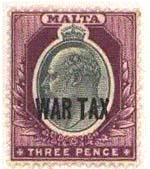 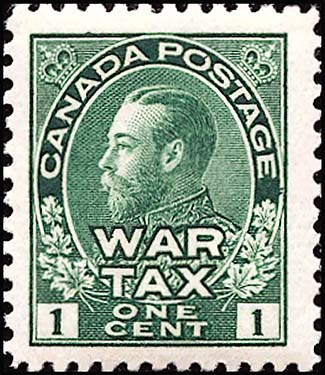 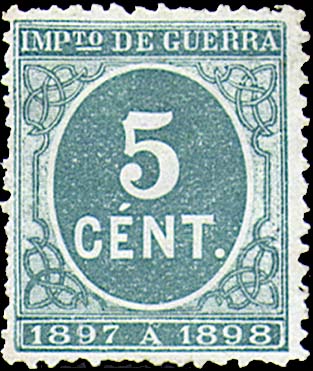 Figure 2. A 5c green war tax stamp, Spain Scott MR19, used to fund the war against Cuban independence, which led into the Spanish American War in 1898. Click on image to enlarge. 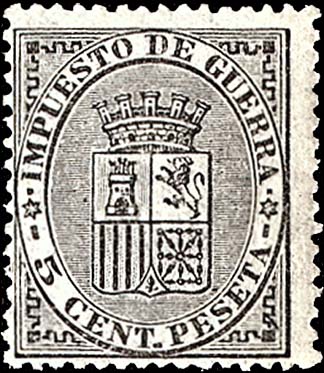 Gen. William Tecumseh Sherman once said, "War is hell." As one of its greatest practitioners, he was in a position to know.

War is also expensive. Many nations needing additional revenue to pay for their armed conflicts have imposed taxes of various kinds on their citizens.

The taxes can take many forms, including the dreaded income tax. Goods and services might also be taxed. Among services that have been taxed is the delivery of mail.

When you think about it, taxing mail delivery is a fairly shrewd way to raise funds. It spreads the obligation equally among the entire population in relatively small, affordable increments.

War tax stamps are listed in the Scott stamp catalogs in the back-of-the-book sections after postage due stamps but before Official stamps.

The Scott prefix for war tax stamps are the letters "MR."

War tax stamps are similar to postal tax stamps, with the exception that the funds they raise are dedicated to defray the cost of a war, while postal taxes usually go to charities or other similar institutions.

The first country to impose a war tax on mail services was Spain during the Third Carlist War (called the Second Carlist War in some sources), 1872-76.

The war was a three-way civil war between liberal republicans, supporters of Alfonso XII of the House of Bourbon and supporters of Carlos VII, the Carlist pretender to the throne.

Spain issued stamps inscribed "Impuesto de Guerra" (War Tax). Beginning in 1874, the stamps were required to be used on all mail.

Their use continued for several years after the war ended, as the Spanish government sought to pay off its war debts.

The Spanish war tax stamps of the Third Carlist War are listed in the Scott catalog as Spain MR1-11. Supporters of Alfonso XII won the war, as can be seen by his appearance on Scott MR5-11.

Spain produced more war tax stamps in 1879, listed as Scott MR12-18, but these stamps were never placed in use.

Spain again issued war tax stamps beginning in 1897, to raise funds to support the war against Cuban independence, which led into the Spanish-American War of 1898. A 5c green war tax stamp, Spain Scott MR19, is shown in Figure 2.

Doubled, inverted and otherwise nonstandard overprint varieties are numerous in this issue.

World War I was really the apex for the use of postal war tax stamps.

A great many British Commonwealth countries imposed war taxes on the posting of mail. Canada was the first, passing a Special War Revenue Act on Feb. 12, 1915.

A circular was sent to all Canadian postmasters instructing that there would be a "1 cent war tax on letters and post cards for delivery in Canada, U.S., Mexico, U.K. and British Possessions, and generally wherever the 2 cent rate applies."

New stamps were issued in the same design as the definitive stamps then in use in Canada. These stamps are known as the "Admirals" because King George V is shown in an admiral's uniform. The 1¢ green King George V war tax stamp, Scott MR1, is shown in Figure 3.

During the war, other countries employed this form of taxation to augment their war coffers.

Errors were rife in these hastily produced overprinted and surcharged war tax stamps.

Bahamas has both double-overprint and inverted-overprint war tax stamp varieties.

The result is a stamp whose overprints are impressed into the paper, but without ink to print the impression.

Fiji's war tax stamp overprints resulted in a couple of errors: one a double overprint and another an inverted overprint.

There also exists a rather spectacular error that is collected as a pair with one stamp having the "WAR TAX" overprint and one without it.

Jamaica's war stamp overprints are plagued with errors and varieties. The most significant are double, inverted or sideways overprints. Another variety worth seeking is a broken letter overprint that reads "WAP STAMP."

St. Helena has a war tax stamp in which the overprint and surcharge are inverted, and St. Lucia and St. Vincent both have double-overprint error war tax stamps.

Stamps that have missing or partially missing overprints are best collected in pairs adjacent to one with a normal overprint.

Turks and Caicos war tax overprints can be found doubled, inverted or with the word "TAX" missing.

As you can see, collecting British Commonwealth war tax stamps is a rich field, but as these examples show, it can quickly become an expensive pursuit when a collector attempts to complete all known varieties.

Countries not part of the British Commonwealth, including Mozambique and other Portuguese colonies, also issued war tax stamps during the WWI era.

A 5-centavo rose Prow of Galley of Discoveries (Symbolical of Declaration of War) war tax stamp, Mozambique Scott MR2, is shown in Figure 6.

Great Britain, Australia, United States and others imposed war tax on mail during WWI, but these fees were paid with ordinary stamps rather than special war tax stamps.

During WWII, many nations instituted taxation on the carriage of mail. Australia, for example, imposed a ½d war tax on letters mailed beginning in December 1941.

This fee was most commonly paid with the current ½d orange Kangaroo stamp, Scott 166, shown in Figure 8.

In subsequent years there have been occasional war tax stamps such as those Bahrain issued in 1973 and 1974.

As mentioned at the beginning of this article, goods and services were taxed to raise money to pay for wars.

The United States taxed all sorts of items in the 1860s to pay for the Civil War, or the War Between the States, depending on what part of the country you live in.

There were taxes on medicines, matches, playing cards, photographs and perfumes, just to name a few items.

Stamps were issued, and they were obligatory. Many of these stamps have interesting themes, designs or shapes.

They are listed in the Scott Specialized Catalogue of United States Stamps and Covers in the Private Die Proprietary Stamps section.

The field of revenue stamps is as broad as postage stamps, and the stamps are often stunningly beautiful examples of line engraving.

More information can be obtained from the American Revenue Association, Box 1663, Easton, MD 21601-1663, or visit its web site at www.revenuer.org.

It would be nice, if in the not too distant future, war tax stamps would be merely quaint reminders of an obsolete method of problem solving called "war."