Watch for damage you can (or can't) see

Figure 5. A mint stamp that appears undamaged on the front (left) may be hiding faults on the back. The arrows point to a hinge, bacterial foxing and a severe paper thin. 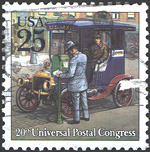 Figure 4. The surface scrape near the right edge of this stamp's design most likely occurred during a journey through sorting machinery.

Figure 3. Damage to this U.S. $1 parcel post stamp is not immediately evident in the photo at left. A careful examination of the stamp reveals a tear that begins along the right edge.

Figure 2. Creases often affect the corners of stamps. At left the crease is obvious in the lower-left corner, but at right the same stamp, with the crease unfolded, appears undamaged.

Figure 1. Perforation damage may come as short or pulled perforations, as seen along the left edge of the stamp at left, or torn corners, as on the Japanese stamp at right.
Previous
Next

Building a stamp collection involves searching out the right stamps that will make your accumulation something you can be proud of.

A collector should always keep a close eye on the quality of the stamps he is adding to the collection.

Stamps that are faulty should be passed by unless no other alternatives are available.

The different kinds of faults collectors encounter are not always immediately visible. Whenever a collector contemplates acquiring a new stamp, he should closely examine the stamp to make sure it doesn't suffer from one or more of the problems described here.

Perforation damage is one of the most common faults that collectors find on postage stamps.

When perforated stamps are separated from one another, the paper points all around the design are called the "perforation teeth."

If stamps are carefully folded along the line of the perforation holes before they are separated from one another, the perforation teeth usually will be tall, sturdy and even.

Sometimes, however, one or more of the teeth will get pulled right off the stamp during separation, leaving little stumps or nothing at all where the perforation teeth should be.

When one tooth is considerably shorter than the rest, it is called a "short perf."

When one tooth is completely missing, it is called a "pulled perf."

In Figure 1, left, is a 10¢ stamp from Zanzibar's engraved definitive set of 1936. The stamp is in fairly good shape except for the lower portion of the left edge.

There you can see at least three perforation teeth that are short or pulled. Others are missing from the right side and the bottom of the stamp.

Do you think this is a tiny defect not worth worrying about?

The fact is that when you're collecting stamps you're dealing in very small items, so small defects actually make up a big part of what is being collected.

Most collectors would prefer to add to their collections a stamp with sound perforation teeth all around. The illustrated Zanzibar stamp is common enough that the collector should pass this example by and look for one that is in better shape.

Another more drastic separation problem is illustrated by the stamp shown in Figure 1, right.

The 1½-sen Wedded Rocks stamp from Japan was issued in 1936. At the lower right in the pictured example, the corner of the stamp is torn off. Most likely this happened as the stamp was being removed from the sheet.

This type of damage sometimes occurs when an attempt is made to remove a single stamp from a pane without creasing or tearing along any other stamps. To accomplish this, the individual doing the tearing actually has to negotiate the corner of the stamp while separating along the perforations.

The success rate for this maneuver is low, and the missing corner on the Wedded Rocks stamps illustrates a common result.

Creases are caused when stamp paper is bent to such a degree that the structure of the paper fibers is changed — and not for the better.

Creases are permanent. They can be hidden sometimes, but where the crease exists the paper is weakened.

At left in Figure 2 is the 1952 50-centavo Eva Peron stamp from Argentina. The paper has been creased along the lower-left edge, leaving the corner folded underneath the stamp.

At right in Figure 2 is a photo of the same stamp, but with the creased corner carefully folded flat and smoothed over.

You really can't see the crease at all, but it's still there.

If it's so hard to see the creases, how can a collector watch for them?

The corners of stamps are what get creased most often. One way to check a stamp for creases is to hold the stamp with one pair of tongs, and very lightly apply pressure near the corners with another pair.

If the corner flops over, you've found a crease. If you get a little resistance, the stamp is probably sound.

Creases also become much more apparent when the stamp is immersed in watermark fluid. It's easier to see the crease with the stamp face down, so you're looking at the back of the stamp.

The watermark fluid will make the crease look like a straight dark line in the paler paper of the stamp.

A tear in the stamp paper sometimes can be difficult to see if there isn't any paper removed.

Figure 3 shows the $1 Fruit Growing parcel post stamp issued by the United States in 1913. A postally used example has a Scott catalog value of $25.

The design on the illustrated stamp is a little off-center, so its value would be discounted.

The off-center design is the least of this stamp's problems, however. While it may look like a sound stamp in the illustration at left in Figure 3, a close examination of the stamp shows it has a jagged 5-millimeter tear starting at the lower edge of the right side.

Some collectors try to patch up such a problem with a little homemade stamp gum or even the remnant of a stamp hinge. If the stamp is your own space-filler, the hinge repair isn't a bad idea. It is a bad idea if it's being used to deceive a potential buyer.

It's something to look for as you examine stamps, particularly as the value and price begin to get more costly.

Scrapes in stamp paper have become a more common fault with the use of high-speed sorting and canceling machinery. As envelopes rocket through these metal mazes, stamps can get snagged on anything and everything.

Another United States stamp helps to show this kind of scrape. The 25¢ Mail Delivery stamp of 1989 shown in Figure 4 has a 7.5mm horizontal scrape extending left from the center of the right edge.

Almost all scrapes from mechanical sources begin along the right edge, which is the leading edge as sorted envelopes travel through the machines.

Stains on stamps can come from a lot of different sources, including chemicals and residue from foreign substances. Chemicals in tape and glue are deadly to stamps, often creating a stain that cannot be removed.

That's why most collectors use stamp hinges and stamp mounts that are specially made for affixing stamps to pages.

Other stains can be the result of something as simple as a food spill, or as seemingly innocent as soaking the stamp off paper.

If the paper is brightly colored, as many greeting card envelopes are, that color can soak free as the stamp is taking its bath, and once-white stamp paper can turn a completely different hue.

Color changelings are another form of stamp damage.

Again, the damage can be the result of chemical contamination or even environmental factors, such as exposure to light.

Both light and chemicals can fade or alter ink colors to make a stamp look like it is a different color than it's supposed to be.

That sometimes makes for an interesting stamp, but not one that you want as the representative example in your stamp collection.

While you're keeping your eyes open for damage, don't forget the back of the stamp.

What looks like a mint stamp in perfect condition may be something less.

A charming semipostal stamp from Belgium is shown at left in Figure 5. The young fellow on this 1937 stamp is Baudouin, who 14 years later became Belgium's king.

This semipostal, the high value of an eight-stamp set, looks just about perfect when viewed from the front. No scrapes or gouges, no bends or tears, the design is wonderfully centered and the color isn't faded or changed.

This stamp's problems are all behind it.

Four faults can be spotted on the reverse of this stamp.

There's a tenacious stamp hinge at the top that apparently was affixed with a lot of moisture, because the stamp paper is slightly bowed at the contact point. While many collectors don't mind a light hinge mark on a mint stamp, this particular hinge, when removed, will probably leave substantial evidence of its stay.

At the other end is a nasty thinning of the stamp paper. Several layers of paper were skinned from the surface, leaving a section so thin that light can shine through.

Much of the adhesive on the stamp is glazed. Instead of having an even texture, the gum appears pasty and mottled in a lot of places, evidence that the stamp was actually lightly affixed to something, perhaps an album page, and then pried off. Most likely the paper thin mentioned earlier occurred when this prying event took place.

Finally, there are some rust-colored spots known as "foxing" in at least two places on the back.

Such spots are caused by bacteria that grow on the stamp paper or adhesive and turn it the approximate color of fox fur.

The foxing, glazing and thinning all point to a likelihood that this stamp was stored under pressure in a humid area, which activated the adhesive and invited in the bacteria.

Stamps should be kept in low humidity, never in basements or other areas where humidity is uncontrolled.

If you were buying this Belgian semipostal from a circuit book, approval packet or a stamp dealer, you would be wise to turn it over and inspect the back.

Even the least expensive stamp in your collection deserves to be one that you will enjoy looking at in years to come.