What the world needs now: Postage stamps that interact with us 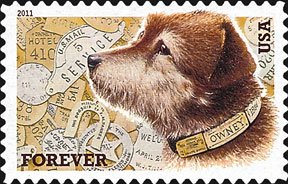 Figure 6. An app and a scan with a smartphone can turn the static image of Owney, the Railway Service's mascot, into a dancing dog. 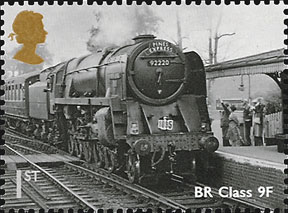 Figure 5. This augmented reality stamp from Great Britain could be scanned with a smartphone app to show a video related to the issue. 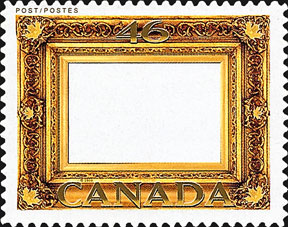 Figure 4. The blank picture frame on this 2000 Canadian stamp could be filled with a sticker or a custom-ordered photo. 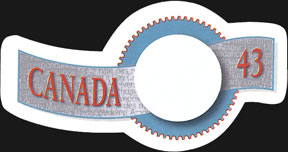 Figure 3. Canada’s 1994 "Greetings" stamp included a space for a sticker to convey a message. 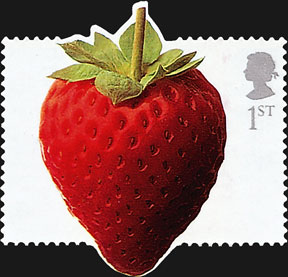 Figure 2. This British "Fruit and Veg" strawberry stamp awaits the application of a face made from stickers included with the issue. 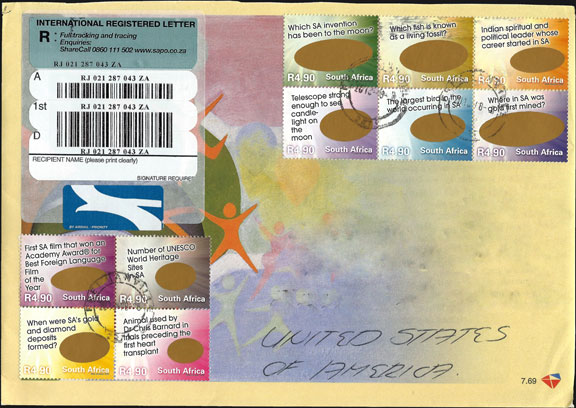 A friend recently sent me the cover shown in Figure 1. It arrived in the United States as registered airmail bearing a complete set of 10 different 4.90-rand South African postage stamps.

Each stamp design asks a trivia question related to South African history, with a golden oval of scratch-to-remove ink. Scratch the oval and the answer to the question appears.

The stamps are very similar to instant lottery tickets that have to be scratched to reveal the amount of money you won or (far more likely) didn't win.

The cleverness of these stamps is undeniable, but as a stamp collector, I didn't have the heart to scratch the golden ovals. These stamps, issued in 2010, are a novel way to get people interested in history and stamp collecting.

Many countries have been issuing interactive postage stamps similar to these from South Africa. Such stamps encourage stamp buyers to actively engage with them by playing with and generally enjoying the stamps themselves rather than just using them on mail.

Perhaps at least some users will hang onto the stamps, taking the first step toward collecting.

In March 2006, Great Britain issued a stamp set called "Fun Fruit n' Veg." These comprised 10 different first-class stamps, very simply designed with a large image of a fruit or vegetable, and in the upper-right corner the silhouette of Queen Elizabeth with "1st" below the monarch's image.

In the border of the sheet of 20 self-adhesive stamps were elements of funny facial expressions, including hats, glasses, moustaches and other accoutrements that might be part of a face. Each of these could be peeled from the backing and applied to the image of the fruit or veg on each stamp to make clever faces, designed on the spot by the person mailing the letter.

For a time in Great Britain, letter-writers were sending mail graced with strawberries, pears, oranges, tomatoes, apples, lemons, red peppers, Brussels sprouts, potatoes and eggplants, all of them sporting do-it-yourself funny faces. It was a cute and creative way to get the public noticing and interested in stamps.

Knowing that people send greeting cards and letters for a variety of special occasions, Canada Post issued "do-it-yourself" greetings stamps in 1994. Figure 3 illustrates a 43¢ self-adhesive die-cut stamp that has an empty center (Scott 1507). The stamps were issued in a self-adhesive booklet format, with five of the stamps having the word "Canada" on the left side of the empty center and five having "Canada" on the right side (1508).

The booklet came with an additional sheet of 35 pictorial stickers in seven different designs. Mailers could choose among hearts, a cake, a baby rattle and several designs for all occasions that could be peeled from the backing paper, put in the stamp's blank center and then affixed to an envelope and mailed. The concept was popular enough that additional stamps and stickers were issued through 1997.

Canada continued the "changeable centers" stamp concept in 2000 with an empty picture-frame stamp, as shown in Figure 4 (Scott 1853). Mailers selected which sticker to use for the center image, or they could special order the stamps with the mailer's own choice of photo.

Great Britain's Royal Mail issued a set of railroad stamps in 2010 which became the world's first augmented reality postage stamps. To see the augmented reality requires a smartphone or iPad and an app (application) from Junaio (available for free from iTunes or Google Play, or go to http://Junaio.com).

Once installed on the smartphone or iPad, the app can scan one of the Great British Railway stamps (Figure 5, Scott 2828) and a video of British actor Bernard Cribbins reading W.H. Auden's poem "Night Mail" will begin playing on your device.

In 2011 the U.S. Postal Service issued a stamp for the unofficial Railway Mail Service mascot, Owney.

The delightful dog stamp became interactive through the magic of modern technology. Users of iPhones or iPads, or with a computer and webcam, can download an Owney app by following instructions on the National Postal Museum's web site at http://postalmuseum.si.edu/owneyapp/index.html.

Once the app is installed, use your device's camera to scan the image on the Owney stamp.

After scanning, Owney will come to life on the computer, phone or iPad, running, dancing and surprising the viewers. It is quite entertaining to see the stamp transform itself into a lifelike character.

Last year Canada Post began using augmented reality to enliven selected postage stamps. To access the augmented reality content you must download the Stamps Alive app onto your smartphone at https://play.google.com/store/apps/details?id=com.addispatch.StampsAlive&hl=en. (Currently not available in the U.S., according to Google Play.)

Even if you don't have a smartphone or iPad, you probably know someone among your friends or family (especially teenagers) who has such a device, and who may be intrigued when you ask for help in accessing the augmented reality on these stamps.

Both Hungary and Israel found a more old-fashioned way to make stamps interactive in 2010. Both nations made stamps into animated flip-books. The booklets contain stamps with an image that changes a little bit from stamp to stamp, page to page. To see the animation, users hold the book in one hand and rapidly fan through the pages using the thumb on the other hand.

To see the Israeli stamp flip-book in action, go to YouTube online at www.youtube.com/watch?v=u2IZ7DV2ppg

You can see the animated results of the Hungarian flip-book on a blog called Philately Moi at http://philaquelymoi.blogspot.com/2013/08/stamps-filp-book.html. (Note that "flip" is indeed misspelled in the correct address.)

Those of us who are baby boomers or older remember the days when stamps were engraved and had water-activated gum that made removing stamps from envelopes easy.

We also liked the perforated holes that allowed one stamp to be separated easily from its next-door neighbor.

Well, those days are over now as far as new issues are concerned, but if we want our hobby to continue, let's embrace these novel stamp designs. If they can introduce other (especially younger) people to the idea of collecting stamps, they will be doing us and our hobby a very big favor.