You can enjoy the stamps you can't afford 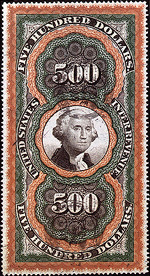 The $500 revenue stamp of 1871 known as the large Persian Rug is a beautiful and very scarce issue.

This block of 24 Penny Black stamps of 1840 will be auctioned in London March 15. Only one collector will have the opportunity to own this scarce historic collectible.

The 2¢ Empire State Express invert error from the 1901 Pan-American Exposition set. New versions of the inverts from the Pan-American set will be issued in March. 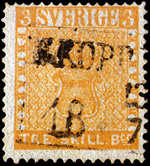 Only a privileged few stamp collectors can add the rarest stamps in the world to their collections. After all, there may be very few or even just one example of a certain stamp available, selling at prices that are astronomical.

The stamp hobby begins with the collecting of postage stamps and extends into hundreds of different specialties, including topical collecting, postal history, revenue stamps and much more.Even though we can't all own these fabulous stamp rarities, most of us still enjoy reading about them and learning about their history.

Linn's Stamp News makes an effort to present a mix of articles that appeal to collectors in the many different specialties that have developed during the history of the stamp hobby.

Even though Linn's columnists and free-lance writers often write about specialized collecting areas, it's likely that those articles will also appeal to readers who may not collect in such areas, but who will enjoy learning about aspects of the stamp hobby new to them.

When the subject of an article is a rare stamp costing many thousands of dollars, the article is not intended just for the collector who may be able to purchase such a stamp. It is also intended to help the reader who wants to learn more about the great stamps and the role they play in the history of the stamp hobby.

Unlike many other hobbies, stamp collecting has a strong history of literature and news reporting that is preserved and updated constantly. How many other hobbies are the subject of several important research libraries and museums established in countries around the world? Stamp collectors not only collect stamps and covers, they also collect knowledge and information.

Sweden's 1855 Three Skilling Banco yellow error of color and its recent appearance at the Nordia 2001 stamp exhibition in Tucson, Ariz., shows how a stamp that interests stamp collectors can also come to the attention of the general public. The stamp, shown in Figure 1, is known as the most valuable stamp in the world. It was the star of the Nordia show, which took place Jan. 19-21. Reports about the stamp's visit were published in Linn's issues of Jan. 29 and Feb. 12.

Even before it reached Arizona, the little yellow-orange stamp had appeared on NBC's Today show, accompanied by Danish stamp dealer Thomas Hoiland, who brought the unique stamp to the United States on behalf of its anonymous owner. When last sold in 1998, the buyer paid $2.3 million for the single stamp, according to Hoiland.

People all around the United States learned that the Three Skilling Banco yellow is so valuable because it is the only known example of the stamp with a yellow color. All other examples are blue-green.

When the stamp was later displayed in Tucson, collectors entering the hall stopped and lingered at the display, intently studying the tiny piece of paper that had such tremendous value. Those who wanted to learn more could find additional information available at the exhibit and published in the show program.

An important fact to remember is that the Three Skilling Banco yellow was not being offered for sale at the show. The purpose of the exhibit was simply to share the stamp with people attending the show, so they could enjoy seeing it and learning more about it for themselves.

People in the United States may learn a little more about valuable U.S. stamps in a few weeks, when the U.S. Postal Service issues three stamps that reproduce the designs of three scarce invert errors. Six stamps commemorating the Pan-American Exposition of 1901 were issued that year bearing pictorial designs printed in black in the center and ornate outer frames of various colors.

Three of those stamps were found with the centers printed upside down (or inverted): the 1¢ and 2¢ were printed and sold that way accidentally, and the 4¢ was printed by order of the U.S. Post Office Department following apparently erroneous reports that a 4¢ invert had been discovered.

The most valuable of the three, the 2¢ Empire State Express invert, catalogs unused at $42,500 in the 2001 Scott Specialized Catalogue of United States Stamps and Covers. An example is shown in Figure 2.

Many U.S. collectors have already learned much about these stamps, including details that appeared in John Hotchner's U.S. Notes column in the Nov. 20, 2000, issue of Linn's. More details will be published in Linn's before the new stamps commemorating the errors are issued March 29.

Depending upon how the new stamps are distributed and publicized by the Postal Service, the general public may learn more about these century-old rarities as well. The new stamps will be sold with one example of each on a sheet — priced at 1¢, 2¢ and 4¢ — along with four diamond-shaped 80¢ stamps that resemble promotional labels from the 1901 exhibition.

In some cases the appearance of valuable stamp items may be reported in stamp hobby publications but may not come to the attention of most individuals outside the hobby.

In the Feb. 12 issue of Linn's, senior editor Rob Haeseler reported on an auction of stamps collected by Thai businessman Pichai Buranasombati that will take place in London March 15.

Shreves Philatelic Galleries will oversee the sale of remarkable British rarities from the collection, including a reconstructed block of 24 1840 Penny Black stamps, the world's first postage stamp. The block, shown in Figure 3, has an estimated value of $294,000. Before the Linn's report, many collectors may not have known that this spectacular item existed.

Only one collector will be able to buy it when it reaches the auction block, but many have enjoyed reading about how it is the largest known multiple from the printing plate identified as Ib.

Great rarities come from all areas of the stamp hobby, and they take many different forms. Even in the specialized collecting field of revenue stamps, certain stamps are cherished above all others.

Among the best known of these is a stamp loved both for its rarity and for its great beauty. The large black, green and red $500 stamp from the documentary second issue is listed in the Scott U.S. specialized catalog as Scott R133. It was issued in 1871 and is known by collectors as "the large Persian Rug" for its large size and rich colors.

The $500 stamp shown in Figure 4 was once part of the Morton Dean Joyce collection of U.S. revenue stamps and was sold at a 1991 auction by Daniel F. Kelleher Co., for more than $10,000. It was manufactured to show evidence of tax paid on documents covering transactions that required taxes of $500 or more.

Only 204 stamps were printed because fiscal dealings for such large sums were rare in the 19th century. The engraving on the stamp measures 52 millimeters by 100mm. The intricate detail was intended to thwart possible counterfeiting.

[Correction: the Refresher Course column of the Feb. 26 issue of Linn's reported an inaccurate quantity for the printing of the 1871 $500 revenue stamp known as "the large Persian Rug."

Linn's reader Michael Mahler provides these details: "Actually 400 were printed, of which 204 had been sold by the time the printers, Butler and Carpenter, lost their contract and turned over the stock of stamps on hand to the government, including 196 of the $500 revenue stamp.

On rare occasions one of the Persian Rug revenue stamps will come to auction, accompanied by articles in the stamp hobby press providing background on these fascinating issues. There may not be many collectors who own the $500 revenue stamp of 1871, but even folks who don't collect revenue stamps recognize that it is a beautiful object, and that taking a few minutes to read more about it is definitely time well spent.