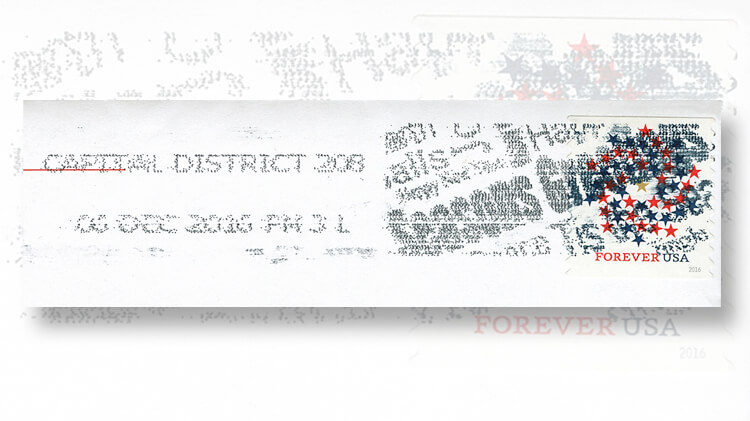 Although it is difficult to determine, the stamp below the heavily applied spray-on holiday postmark is the 2016 Patriotic Spiral forever stamp. 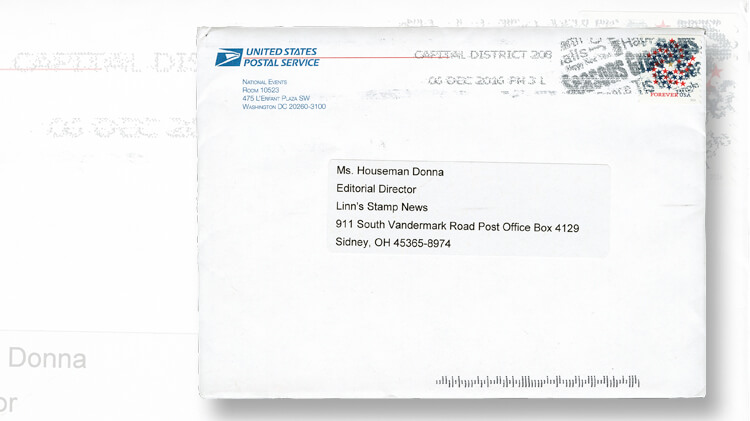 Linn’s reported Dec. 13 that the United States Postal Service is offering a new spray-on postmark with a holiday theme.

The new postmark is showing up on the mail received in Linn’s offices here in Sidney, Ohio, and the covers we have seen indicate that this year’s holiday postmark is disappointing from the collector’s point of view.

The mail we have seen indicates that the design for the 2016 holidays is too complicated to be used as a spray-on postmark. Each example we have seen obscures the stamp, and in many instances, it is difficult to determine what stamp lies beneath the heavy cancellation.

A case in point is the cover shown with this column. The cover contains a lovely holiday greetings card from Postmaster General Megan Brennan. The card is sure to find its way into my collection.

If you look closely at the cover, you can determine that the stamp is the 2016 Patriotic Spiral forever stamp, but unfortunately, the postmark smears the stamp and loses some of its holiday message except for the words “Season’s Greetings.”

In addition to the “Season’s Greetings” message, the postmark consists of other words and greetings associated with Christmas and the holiday season.

In recent years, collectors have had fun with holiday spray-on postmarks. A snowman was featured in 2010, and in 2011 the holiday postmark showed Santa in his sleigh pulled by six tiny reindeer.

During the 2014 holiday season, the spray-on markings featured Rudolph and his friends from the 1964 Rudolph the Red-Nosed Reindeer television special: Santa Claus, Hermey the elf, the Bumble (the Abominable Snow Monster of the North).

I’m not a fan of spray-on postmarks, but I must admit the Rudolph and friends postmarks are cute, and added an element of whimsy to mail sent during the holiday season.

By contrast, the 2016 holiday postmarks bring a garbled message to recipients. Perhaps a simple “Seasons Greetings” message would have sufficed.