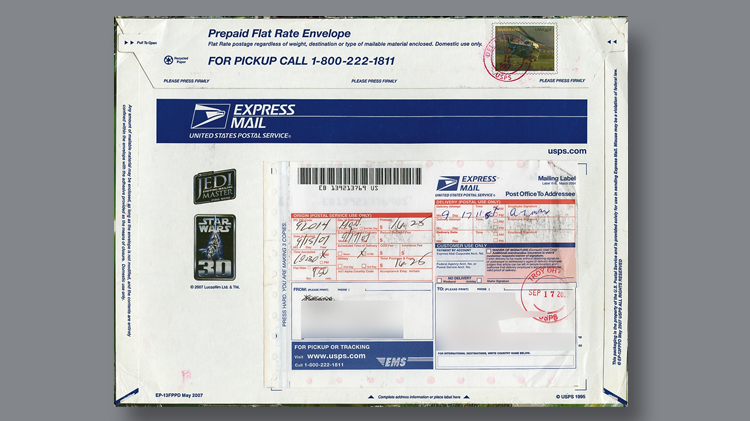 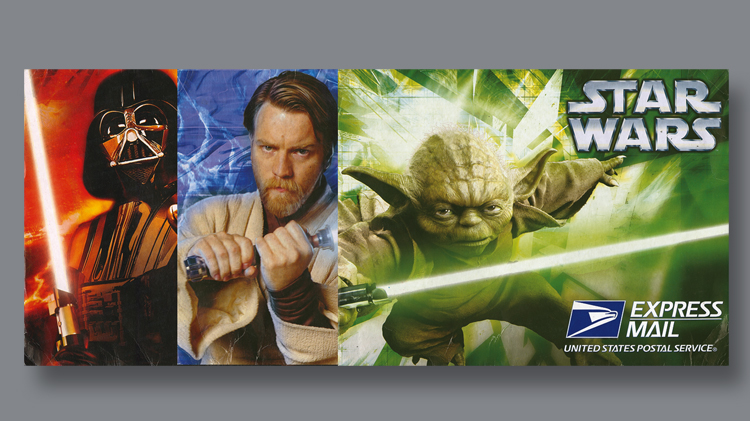 Only one Scott number is assigned to the 2007 $16.25 Express Mail stamped envelope. However, there are three versions, each featuring a bold illustration of a Star Wars movie character (left to right): Darth Vader, Obi-wan Kenobi and Yoda.
Previous
Next

The names are the official call signs used when the president is aboard either aircraft.

If these stamps’ designs were familiar to some collectors at the time they were issued, that’s because a bit more than a month earlier, on May 6, the Postal Service issued $4.60 Priority Mail and $16.25 Express Mail stamped envelopes with identical designs (Scott U660 and U661, respectively).

Why a pack of three envelopes? The answer may be found on the backs of the envelopes, each of which showcases an oversize, colorful image of a different Star Wars movie character — Darth Vader, Obi-wan Kenobi and Yoda. Each pack contained one of each version.

Because each envelope features the same stamp imprint, the Scott catalog assigns only one number. Nonetheless, many postal stationery collectors would see their collection as incomplete without an example of all three.

Each character wields a light saber, and the familiar “Star Wars” logo appears at top right.

Two visual clues about the special nature of the envelopes are visible on the front, to the left of the address panel: a logo reading “Jedi Shipping Mailing Master” atop a second “Star Wars 30” logo.

When the envelope flap is folded over and sealed, the stamp imprint appears at top right. This placement results in the destruction of the stamp when the “pull to open” strip is used.

This postal stationery trio and its $4.60 cousin were issued not quite three weeks before the 30th anniversary of the release of the first Star Wars film May 25, 1977.

On the exact 30th anniversary date, May 25, 2007, the USPS debuted its pane of 15 Star Wars stamps to largely positive acclaim. The same could not be said of the three-pack of $16.25 Express Mail envelopes.

Some collectors grumbled because of the cost, $48.75, and because they were available only from the Stamp Fulfillment Services mail-order center in Kansas City, Mo.

To further elevate collector angst, the USPS said in its initial announcement about the $16.25 Express Mail envelopes that they would be available for a short duration — May 6 to Sept. 1, 2007. About a month later, the USPS relaxed its restrictions and made the envelopes available individually.

Postally used examples of the three $16.25 Marine One envelopes with contemporaneous postmarks are not frequently encountered.

Shown is a representative example, sent Sept. 15, 2007, from Del Mar, Calif., to Troy, Ohio. Docketing and a Troy receiver handstamp on the address label indicate the envelope arrived in Troy Sept. 17, two days after it was mailed.

A fringe of green around the envelope is a tipoff that this envelope pictures Yoda on the back.

Did the Postal Service strike out with the $16.25 Marine One envelopes? Well, there hasn’t been another Express Mail stamped envelope issued since. Judge for yourself.

Last, but by no means least, a tip of the dollar-sign hat to David McDevitt of Pennsylvania for suggesting the subject for this month’s column.

I welcome your stories about U.S. dollar-denominated stamps and postal history. Is there a particular stamp or subject you would like to see discussed? Please tell me by writing to Dollar-Sign Stamps, Box 4129, Sidney, OH 45365-4129. You may also reach me via email.