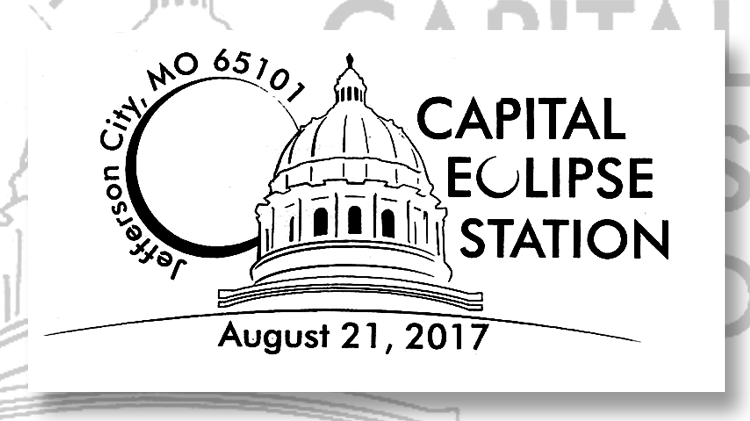 The Missouri state capitol dome is visible with a representation of a total solar eclipse in progress on this Aug. 21 postmark from Jefferson City, Mo.

Excitement has been building for the upcoming total solar eclipse, which will travel coast-to-coast across the continental United States Aug. 21.

The total solar eclipse will be visible within a relatively narrow band roughly 70 miles wide that will cross the nation from the west coast of Oregon to the east coast of South Carolina.

Areas of the country outside the path of totality will experience a partial solar eclipse with varying percentages of the sun blocked by the passing moon, depending upon the location.

Details about the 2017 eclipse, including maps that show precisely where totality will take place, are easily found with an Internet search.

One location that is well within the path of totality is Jefferson City, Mo., which has its very own eclipse website at www.capitaleclipse.org.

There you’ll find three days’ worth of fun activities scheduled, all leading up to the eclipse and totality, which will occur around 1:13 p.m. local time. The time when totality begins varies by location.

The Jefferson City post office is planning to participate on Monday with a booth set up outside the main post office downtown. Along with selling stamps, the post office is offering an Aug. 21 postmark showing the sun in eclipse and the dome of the Missouri state capitol.

It’s the first 2017 eclipse postmark announced for the actual day of the eclipse, though others might be on the way from additional locations.

Obviously, the Total Solar Eclipse forever stamp issued June 20 is the perfect franking for your postmark request. Ask for the stamp at your local post office or order it here.

The following cancels are also available