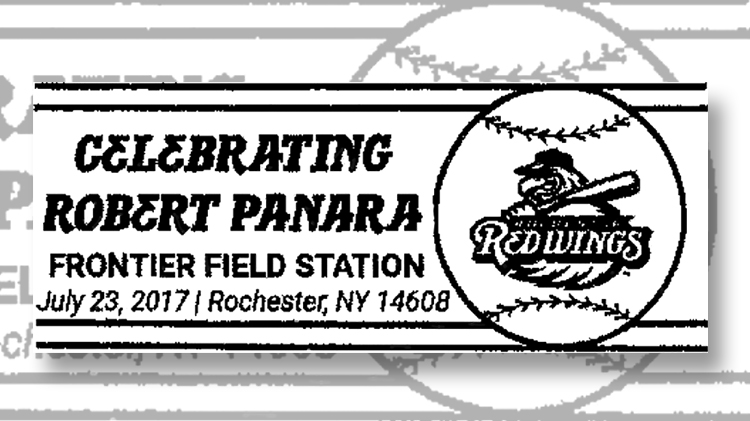 The Rochester Red Wings baseball team, the AAA minor league affiliate of the Minnesota Twins, paid tribute July 23 to Robert Panara (1920-2014), the deaf studies pioneer who taught at the Rochester Institute of Technology in Rochester, N.Y.

In association with the Rochester post office, fans visiting Frontier Field for the game between the Red Wings and the Toledo Mud Hens received a souvenir postcard honoring Panara, a baseball fan and longtime Red Wings supporter.

Panara was previously honored by the United States Postal Service on April 11 with the issuance of a nondenominated (70¢) 2-ounce rate stamp in the Distinguished Americans definitive series (Scott 5191).

The Postal Service had a table set up at the ballpark on Sunday and offered the Panara stamp and a commemorative postmark honoring both the team and its famous fan.

“A lot of people think a bobblehead is a big deal,” Red Wings general manager Dan Mason told Spectrum News, “but to get a stamp with your image on it is just amazing.”

Panara’s son John, an English instructor at the RIT National Technical Institute for the Deaf, participated in the day’s events.

The Induction Day postmark shows the hall’s logo illustrating a baseball and a shield, and is available from: