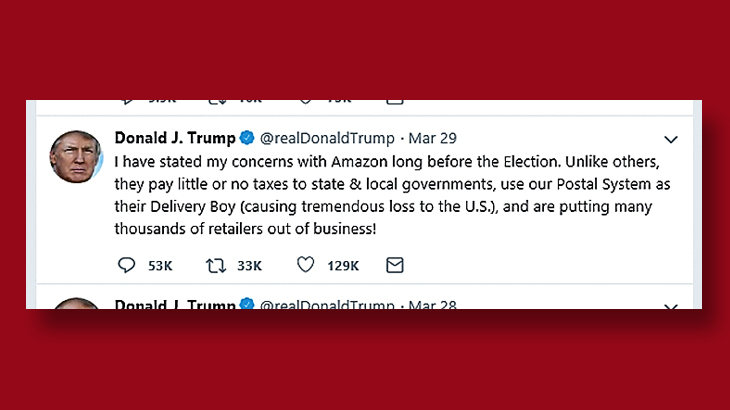 President Donald Trump posted this message via Twitter on March 29.

President Donald Trump seems determined to undermine the United States Postal Service’s relationship with one of its biggest customers.

Not once, but five times in six days has the president renewed his complaints about Amazon, the Seattle-based online retailing giant and the nation’s postal system.

Then he followed that March 29 tweet with two more on March 31 from his Mar-a-Lago estate charging that the Postal Service is losing $1.50 on each package it delivers for Amazon.

“That amounts to Billions of Dollars,” the president said.

He added in a second tweet that USPS should boost Amazon’s shipping rates so its costs “would rise by $2.6 billion.”

Neither the Postal Service nor Amazon offered any comments on the Trump tweets.

But a number of media outlets challenged the president’s statements.

The Washington Post, which is owned by Bezos, noted that the president has previously tweeted about Amazon and the Postal Service “even though officials have explained to him that Amazon’s contracts with the Postal Service are profitable for the agency.”

Other publications noted that package volumes at the Postal Service have risen, while letter volume, once a mainstay of postal revenues, have continued to drop.

Several newspapers noted that White House officials were suggesting that the president had no plans for executive actions that might effect the Amazon-USPS deal.

“Only fools, or worse, are saying that our money-losing Post Office makes money with Amazon,” he said.

“THEY LOSE A FORTUNE, and this will be changed,” Trump said.

The Los Angeles Times quoted Brad Parscale, manager of the Trump 2020 presidential campaign, as suggesting the president might attempt to force Amazon to pay higher postage.

“Once the market figures out that a single @usps rule change will crush @amazon’s bottom line, we will see,” Parscale said in a tweet.

The Washington Times also noted that Amazon and the Washington Post “have been regular punching bags for Trump.”

The president has tweeted that the newspaper acts as “a lobbyist weapon” to keep Congress from investigating Amazon.

Trump said in his blast against Amazon that the newspaper should register as a lobbyist.

Trump repeated some of his complaints about Amazon in an April 3 tweet.

The president first attacked the Postal Service agreement in December, charging that Amazon was not paying enough postage for the parcels its sends via the USPS.

His tweets about Amazon also have criticized the company for paying “little or no” state and local taxes, “putting thousands of retailers out of business” and “causing tremendous loss to the U.S.”

Postal officials have long wanted the White House to pay attention to its years of running multibillion dollar deficits, but the attacks that Trump had made on the agency are not the type of scrutiny that they had sought.

Details of the Amazon shipping agreement with Postal Service are secret.

The Postal Regulatory Commission, which examines such contracts, has held that they are profitable to Postal Service.