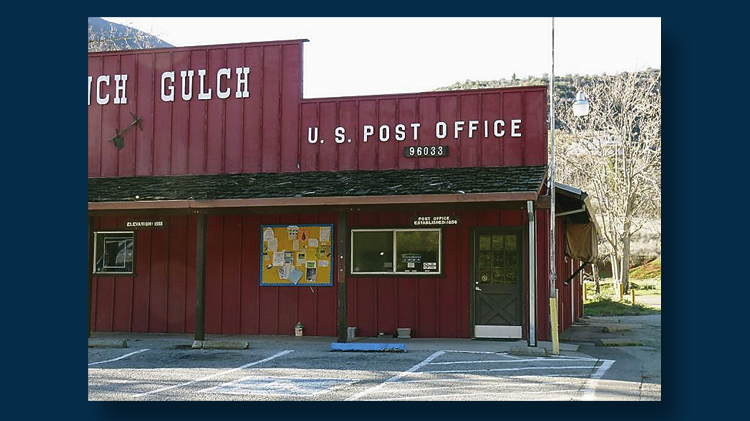 The small post office serving French Gulch, Calif., pictured in 2016. The office is one of several that has been closed because of active wildfires in northern California. Photograph by John Gallagher, courtesy Post Mark Collectors Club, used with permiss

Recent wildfires in northern California and volcanic activity on Hawaii’s Big Island have caused the closure of multiple post offices this summer.

As of Aug. 13, two post offices in California remain closed because of the deadly wildfires.

The Stonyford post office, near the eastern edge of the Mendocino National Forest and roughly 100 miles northwest of Sacramento, closed Aug. 6. Customers are advised that mail pickup is available at the Maxwell post office, approximately 30 miles to the east.

A little more than 100 miles north of Stonyford, the post office in tiny French Gulch, Calif., has been closed since July 25. Mail pickup is available at the downtown post office in Redding, less than 20 miles to the east.

“We apologize for this inconvenience to our customers and hope to have the French Gulch office reopened and fully operational again as soon as possible,” the Postal Service stated.

Some post offices were temporarily closed and have since reopened, including the Yosemite National Park post office, along with post offices in El Portal, Shasta, Fish Camp, Igo and Lewiston.

Some offices were closed no more than a day or two.

Delivery service to some 3,800 homes in Corona was temporarily halted Aug. 9 because of the Holy Fire in the Trabuco Canyon region.

The Hawaii Volcanoes National Park post office closed May 11 “due to the possibility of an explosive steam event and ash fall at the summit of Kilauea Volcano,” according to the Postal Service. The post office — and the entire national park in which it is located — remains closed as of Aug. 14, according to a Postal Service representative.

Customers of the park post office can pick up their mail at the Volcano, Hawaii, post office at 19-4030 Old Volcano Highway.

The Pahoa, Hawaii, post office serves the town of Pahoa and the Puna district. Mail delivery is currently restricted in several nearby communities, but residents can pick up mail at the Pahoa office.

The Postal Service regularly revises its service disruption alerts at its website.