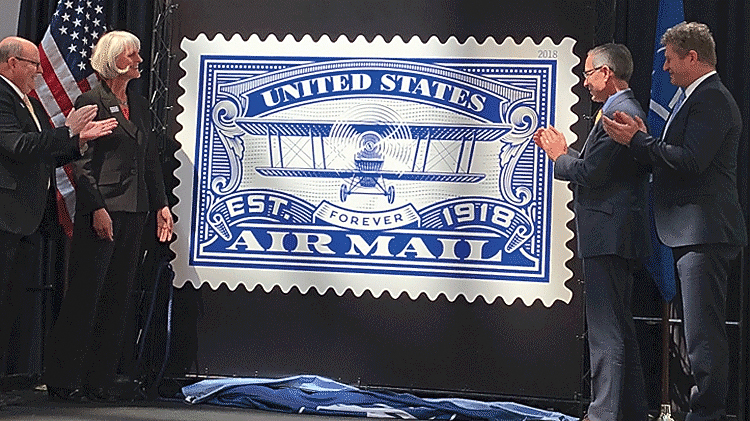 The unveiling of the blue United States Airmail commemorative forever stamp May 1 at the Smithsonian’s National Postal Museum. Photographs by Jay Bigalke. 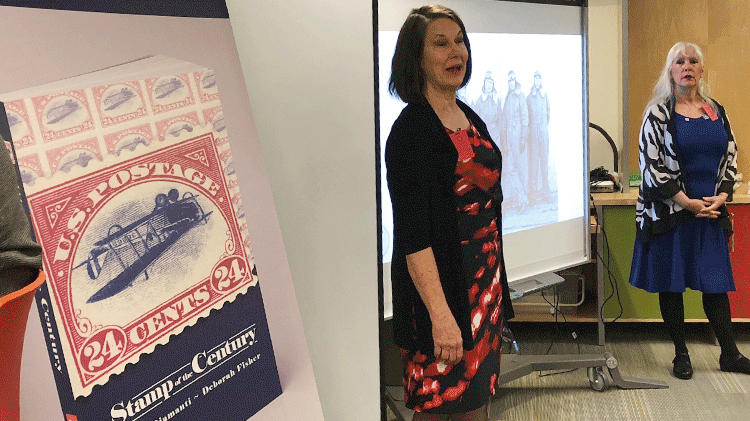 Authors Kellen Diamanti and Deborah Fisher talking about their new book Stamp of the Century at the National Postal Museum.
Previous
Next

The United States Postal Service used a first-day ceremony saluting the 100th anniversary of U.S. airmail service to remind the nation that its first, daring mail pilots laid the foundations for commercial aviation in America.

“Some pilots were goofy, some serious, but all understood the bargain they had made, risking their lives to get the mail through,” postal historian Nancy A. Pope told an audience that filled the atrium of the Smithsonian’s National Postal Museum on May 1.

More than 230 pilots carried the mail in tiny single-engine planes, and 32 of them were killed in the process, Pope said.

Standing under one of the planes the first postal pilots flew, Pope said those men “were a hit” with the public.

“The astronauts of their age, they braved storms and equipment failure,” she said.

A second stamp bearing the same image but printed in red will be issued Aug. 11 at College Park, Md., to mark the 100th anniversary of when the U.S. Post Office Department took charge of the flights from the Army.

“The Wright Brothers opened this country’s eyes to what could be possible,” Brownell said.

They flew by day because there were no airfield beacons or land lights at the time, Pope, the head curator at the postal museum, recalled.

They navigated by rivers and railroads, and when they crashed they often laughed off the disaster.

After plowing into a tree, pilot Sam Eaton declared in a report he had delivered his mail to a “branch” post office, Pope said.

Dean Smith, another pilot, reported his plane crashed into a pasture.

“Only place to land on cow. Killed cow. Wrecked airplane. Scared me,” he wrote.

Army Lt. George Boyle had one of the most infamous flights.

He was selected to make the premier mail flight from Washington to Philadelphia on May 15, 1918.

Sent into the skies by a delegation headed by President Woodrow Wilson, Boyle mistakenly flew southeast, crashing in Waldorf, Md.

His airmail letters were placed on a truck and then a train.

Three other pilots made their initial flights that day without mishap that day.

Two days later the Post Office Department gave Boyle a second chance. Despite another plane to guide him to Philadelphia, Boyle flew to the Chesapeake Bay and then went south, landing at Cape Charles, Va.

Pope quoted an Army officer saying that the only thing that stopped Boyle from flying further was the Atlantic Ocean.

The entire Army mail operation lasted three months, and then the Post Office Department took charge of the airmail service. The department began turning the routes and operations over to private contractors in 1925.

“While it no longer operated the service, the Post Office supported the fledgling companies with mail contracts, helping to create the nation’s commercial aviation system,” Pope said.

The first-day ceremony also marked the opening of a new exhibit at the museum, “Postmen of the Skies” that features stories about early mail pilots and their exploits.

The exhibit will be open through May 27, 2019. The National Postal Museum (2 Massachusetts Ave. N.E.) is open daily, except for Christmas. There are no admission fees.

Authors Kellen Diamanti and Deborah Fisher spoke about their new book Stamp of the Century at a reception following the first-day event.

The book, published by the American Philatelic Society, recalls stories about the many owners of the infamous 1918 24¢ Inverted Jenny airmail error stamp (Scott C3a).

“It’s a look at American history though the lends of these stamps,” Fisher said at a reception at the museum.

“We wrote a four-year book in three years,” said Diamanti.

Asked by museum director Elliot Gruber what surprised them in their research, Diamanti answered it was learning what a mess the government’s pre-World War I aviation programs were.

It was “an amazing boondoggle,” she said.