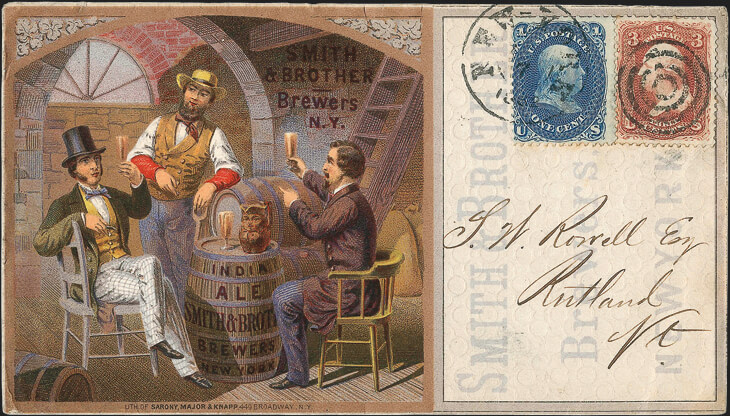 Ben Bailar, who died Feb. 20 at age 82, collected United States stamps and postal history associated with his namesake: Benjamin Franklin. His impressive collection, which was sold in 2015, included this famous Smith & Brother Brewers advertising cover. I

Benjamin Franklin Bailar, a collector of classic United States stamps who became the nation’s 61st postmaster general and presided over the Postal Service in its early years as an independent federal agency, died Feb. 20. He was 82.

Mr. Bailar was born April 21, 1934, in Champaign, Ill., and lived in Lake Forest, Ill. He had suffered a series of strokes prior to his death, according to friends.

Mr. Bailar, who was recruited to the Postal Service because of his business background, was deputy postmaster general when he was tapped by the board of governors to replace Elmer T. Klassen in 1975.

Mr. Bailar served until 1978, trying to help the newly reorganized Postal Service “support itself on revenues from mail users,” instead of taxpayer funds, according to the Gerald R. Ford Presidential Library, in Ann Arbor, Mich., which houses Mr. Bailar’s papers.

“Mr. Bailar was especially concerned with the quality of mail service and postal costs,” especially labor costs, which then, as now, consume most of the Postal Service’s revenues, the library website said.

At the urging of Postmaster General John W. “Jack” Potter, Mr. Bailar returned to the Postal Service in 2006 as an unpaid member of the Citizens’ Stamp Advisory Committee.

In 2014, he resigned from the panel, saying he feared the committee, which reviews stamp designs, had become overly concerned about selling stamps that would raise money for the cash-hungry Postal Service and less concerned about what message those stamps would say to the world.

“The time may have come to abolish CSAC,” he said in a letter to then Postmaster General Patrick Donahoe that was obtained by Linn’s.

The tone of the letter shocked some at Postal Service headquarters in Washington, but it reflected a period when some members of the committee were privately fearing they were left out of the loop on new stamp designs. Some walked out of a 2012 meeting over their discontent.

CSAC chairwoman Janet Klug told Linn’s at the time she believed Mr. Bailar’s concerns were “based on what was happening in 2012 and not on what is happening now.”

“I don’t always agree with him, but I respect him,” she said.

The Postal Service issued a statement praising Mr. Bailar’s seven years on the CSAC and promised that the issues he raised would be discussed with Klug and the committee.

“The Postmaster General and CSAC members wholeheartedly agree with Mr. Bailar that the stamp program should celebrate the things that are great about the United States and serve as a medium to communicate those things to a world-wide audience,” the statement said.

He continued to press for changes in the stamp program after he left the committee.

In a 2015 letter to Postmaster General Megan Brennan, Mr. Bailar and two other former CSAC members urged that she revamp the committee by appointing fewer artists and marketers to the panel.

“The emphasis should be on substance rather than edgy art reflecting the ooo’s and ahh’s of the artists and designers themselves,” said the letter. “It’s not about them. It’s about the American people.”

As postmaster general, Mr. Bailar took credit for negotiating a July 1975 agreement that was said to have averted a labor strike.

He also clashed with the CIA surveillance of mail going to Soviet diplomats.

The Postal Service’s actions, which had apparently been approved in secret by Mr. Bailar’s predecessors, violated the sanctity of the mail, Mr. Bailar said.

He told Linn’s a CIA memo about the surveillance, which had surfaced in 1975, was “a sad commentary on the CIA interest in living with our laws.”

A native of Champaign, Ill., he graduated from the University of Colorado with a degree in geology and then received a master’s degree in business administration from Harvard University.

He worked for Continental Oil Co. and American Can Co. before he joined the USPS.

In his introduction to the Siegel catalog, Mr. Bailar recounts how his being named postmaster general in 1975 led to the beginning of his remarkable collection.

To avoid perceived conflicts of interest between his official duties and how they might increase the value of his collection, Bailer decided to sell his collection.

Two items, however, he retained: his namesake’s two postmaster’s commissions, which were among the highlights from the 2015 Siegel sale.

Among the many gems from Bailar’s collection is the cover pictured here, which Siegel described in the sale catalog as being “widely regarded as the most beautiful classic American advertising cover in existence.” It sold for $40,250, inclusive of Siegel’s 15 percent buyer’s premium.

“It has been filled with learning experiences, social interaction with fellow collectors, the highs and lows of auction successes and failures, and tremendous satisfaction in creating what I believe is a unique collection — everything that makes stamp collecting such a great hobby.”