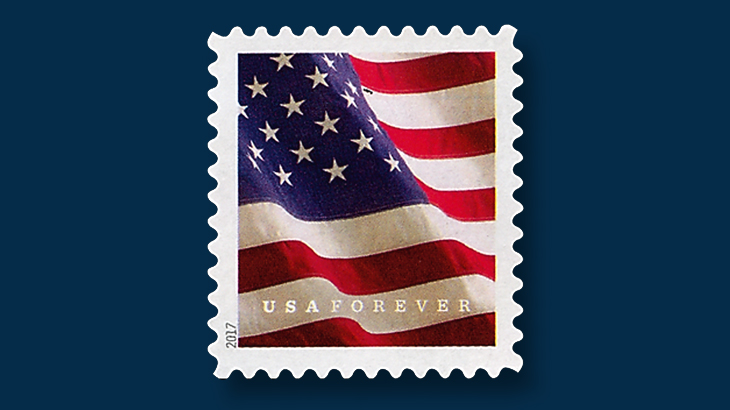 Six Flag stamps franked a suspicious parcel reportedly delivered to CNN in New York City on Oct. 24, but reports claim the parcel was "delivered by courier." 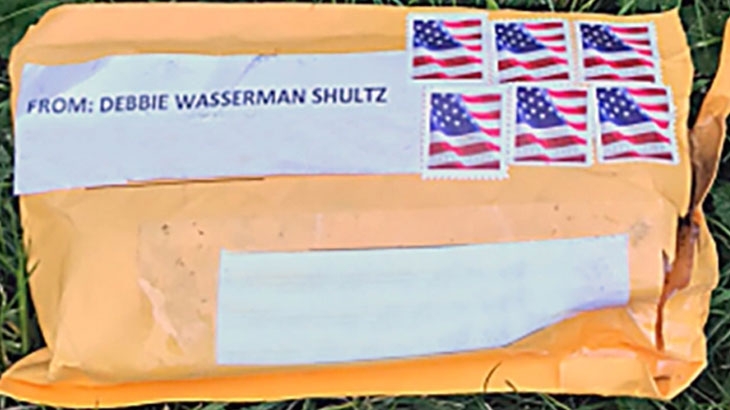 An FBI photo posted online Wednesday, Oct. 24, shows one of the envelopes addressed to different political figures that contained a potentially dangerous device.
Previous
Next

Reports of explosive devices individually addressed or delivered to a number of prominent political leaders, as well as the New York City headquarters of CNN News, dominated the news on Wednesday, Oct. 24.

A photo of one device and its outer packaging was posted on the CNN website in the early afternoon.

What appears to be a small black device perhaps six inches long is pictured with a larger manila envelope franked with six Flag forever stamps of the design issued in January 2017 (Scott 5158-5162).

The self-adhesive stamps are arranged three across and two down.

However, despite the postal franking, CNN reports that law enforcement sources say the package sent to the network’s Time Warner Center offices was delivered by courier.

The device left in Soros’ mailbox was found one day earlier, and ABC News reported the pipe bomb “loaded with explosive black powder was hand-delivered” to the home, also noting the information came from law enforcement.

“The device was not delivered via U.S. Postal Service, a source familiar with the investigation confirmed to ABC News.”

The ABC report said the device in the Soros mailbox “was in an 8-by-10-inch envelope made to look like it was delivered through the mail,” according to the network’s source, who added that a postal inspector examined markings on the envelope and determined it had been hand-delivered.

"The packages were mailed in manila envelopes with bubble wrap interior," according to an FBI report posted Wednesday. "The packages were affixed with computer-printed address labels and six Forever stamps. All packages had a return address of 'DEBBIE WASSERMAN SHULTZ' [sic] in Florida."

Reports of similar devices being discovered surfaced one after another during the course of the day on Wednesday, with packages intercepted that were addressed to former Attorney General Eric Holder and Rep. Maxine Waters (D-Calif.), as well as Obama, Clinton and Soros, according to CBS News. There were no initial reports of injuries from the devices.

The packages are being analyzed at the FBI Laboratory in Quantico, Va.

This story was revised Oct. 25 to delete a reference to a package addressed to New York Gov. Andrew Cuomo, which soon after was determined not to be related to the others, and to update with information about parcels addressed to De Niro and Biden.