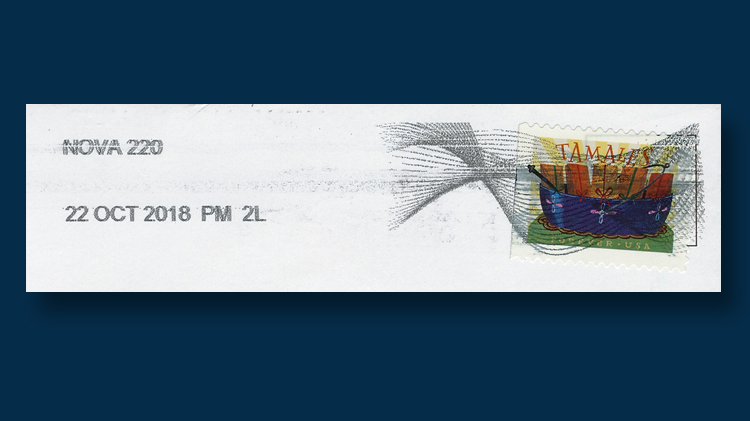 The United States Postal Service may be testing this new sprayed-on postmark design at the mail-processing plant in northern Virginia.

In the Philatelic Foreword column in the Sept. 24 Linn’s, I discussed a new “Thinking of You” sprayed-on postmark being used, and I pointed out legibility issues with the design.

I’m sure it’s a coincidence, but shortly after that column was published, the sprayed-on postmark design shown nearby was spotted on mail.

While this cancellation has a much finer dot pattern, it also has a very heavy wave pattern that completely obliterates the stamp  — and that’s an understatement in this case.

While it is promising that the United States Postal Service is testing something new to improve on postmark legibility, it would be even more encouraging if these postmarks would not destroy the stamp design in the process.

In the Nov. 26 issue of Linn’s, page 13, Denise McCarty provided an update on New Zealand Post and how it is canceling mail now. The new postmark features a simple straightline design that accomplishes the task and doesn’t ruin the stamp in the process.

Here’s hoping the U.S. Postal Service takes note of what they are doing in New Zealand and also gives the stamps on envelopes the respect they deserve in showcasing America to the general public.

We want everyone to see the stamps we all enjoy as a part of this hobby.