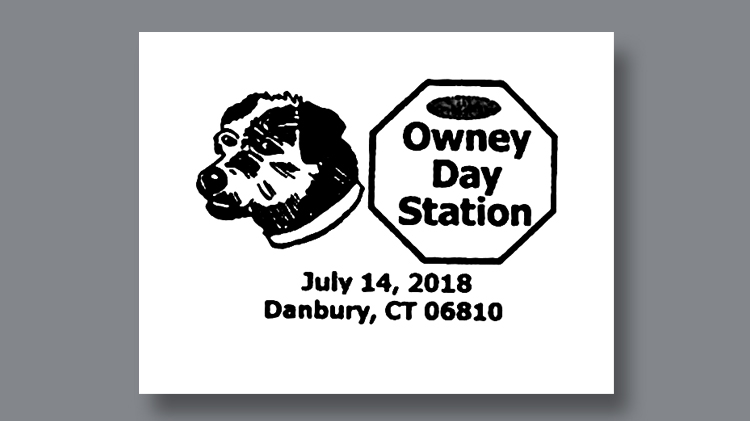 Owney, the Railway Post Office dog, is shown on this July 14 postmark used in Danbury, Conn.

The beloved mutt was a frequent visitor at the Albany, N.Y., post office in 1888. According to the Smithsonian’s National Postal Museum, Owney likely belonged to a postal employee who brought the canine to work every day. When his owner moved away, the pup stayed with his new postal friends.

Because he was attracted to the texture or scent of the mailbags, he began to travel with them on Railway Post Office trains across the country.

Owney was thought to be a good luck charm because all of the trains he boarded arrived at their destinations successfully. It wasn’t long before he was considered the unofficial mascot for the RPO.

In June 1897, Owney headed to Toledo, Ohio, on a mail train. “While he was there, he was shown to a newspaper reporter by a postal clerk. Owney became ill tempered and although the exact circumstances were not satisfactorily reported, Owney died in Toledo of a bullet wound on June 11, 1897,” the postal museum said.

Owney was preserved and is on display in the Postal Museum’s atrium, wearing his harness and surrounded by several of his tags.

Owney was commemorated in 2011 on a United States forever stamp (Scott 4547).