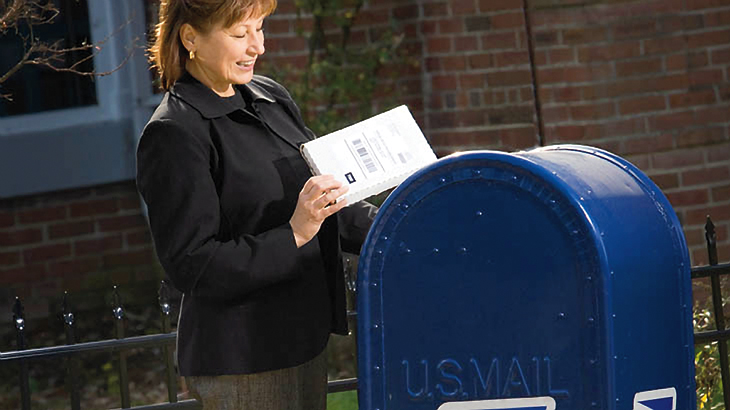 Charlotte Shandley of the Bronx, N.Y., has a problem.

She has to mail letters almost every day, and the job is getting more difficult.

The Postal Service’s curbside blue collection boxes are disappearing from her neighborhood.

“This appears to be permanent and includes the removal of some that were recently replaced with a slot for dropping mail into the box rather than the usual pull-handle opening,” Shandley said in a letter to Linn’s.

“The boxes that were removed were on corners with high traffic, near very busy bus stops,” she said.

“Most of the residents in our neighborhood live in apartments and cannot mail letters directly from their building,” she said.

Shandley was perplexed by the Postal Service’s decision to remove the boxes she liked to use.

“Of all the places to remove a mailbox, that would seem to be a counterproductive choice,” she said.

But she added: “I suppose it speaks to the drastic underuse of the mail system by private citizens.”

I asked the USPS to explain what’s happening to those blue mailboxes.

Kimberly A. Frum of the USPS headquarters public relations staff answered that there are currently 147,000 blue collection boxes on the streets.

“Routine density tests are being conducted at local levels to determine if a mailbox is being utilized,” she said.

All decisions are “made on a case-by-case basis,” she added.

If a mailbox is “the only means of sending a letter or other correspondence in a neighborhood business center or senior citizen complex, the Postal Service could decide to keep it there,” she said.

Before a box is removed, the USPS is suppose to post a notice of removal on the box 30 days before the box is actually pulled off the street, she said. The notice is supposed to direct mailers to the nearest collection box and list its collection times.

“For decades, the installation and removal of the Postal Service’s iconic blue collection mail boxes from streets across the country has been based on mail volume received in those boxes,” Frum said.

“It is a fluid process and figures can vary from day to day. Historically, mail boxes have been removed for lack of use and installed in growth areas.”

“… Removing the box is simply good business sense in that respect,” she said.

“It is important to note that anyone with a residential or business mailbox can use it as a vehicle to send outgoing mail,” Frum said.

In recent years, Frum said the USPS has placed “great emphasis on stabilizing the number of collection boxes in use and in relocating low-use boxes to high-traffic areas such as shopping centers, business parks, grocery stores, etc. for increased customer convenience.”

Collection times may change as well, depending on mail transportation schedules, she said.

Bronx residents are not alone in their worry about disappearing mailboxes.

The Chicago Tribune reported Nov. 2 that the USPS had removed more than 128 mailboxes in that city last month.

It was a “security precaution” taken in advance of the Oct. 8 Chicago Marathon, something that has been undertaken every year since the Boston Marathon bombing of 2013, the paper said.

But as of Nov. 2, only 18 of the boxes had been returned to the streets, a postal official told the newspaper.

The results there have been a lot of complaints, especially from seniors.

I asked Shandley if Frum’s response answered her concerns.

“It answers my question,” she replied.

“I realize the number of people sending mail is dwindling and my needs are in the minority,” she said.

She said she can’t send mail from her apartment building or where she works.

“There is always the local post office, but that is not convenient for me to send mail from on a regular basis,” she concluded.

So letter writer Shandley has become yet another unhappy USPS patron. What she seems to be facing is why many postal officials fear the mail service could be spinning into a death spiral.