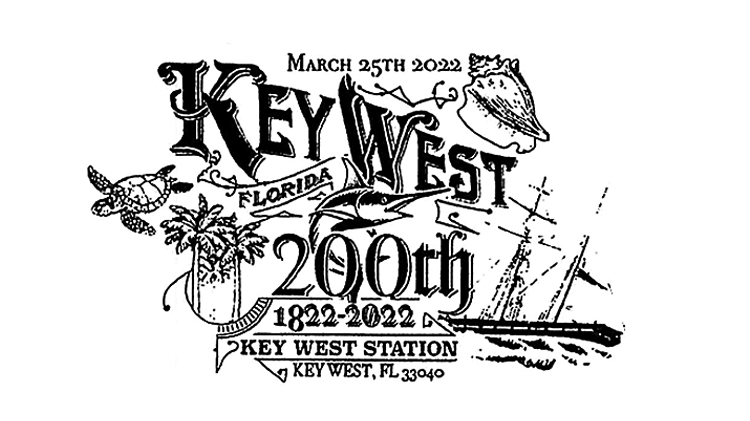 The Key West postmark features the 200th anniversary celebration logo with symbols of the island.

Since we’re in the midst of spring break/get-me-out-of-winter season, featuring the Florida island city of Key West in this week’s column seemed fitting. The March 25 postmark design includes a conch shell, turtle, ship and palm trees and is one of many ways the 200th anniversary of American settlement in Key West is being celebrated.

The island is part of the Florida Keys archipelago and the state’s southernmost point, roughly 90 miles north of Cuba.

Key West’s American story began in January 1822 when United States businessman John Simonton purchased the land from Spanish military officer Juan Pablo Salas for $2,000. Simonton and other merchants settled on the island, and on March 25, 1822, U.S. Navy Lt. Matthew C. Perry planted the U.S. flag there as directed by the Navy.

A re-enactment of Perry’s claiming of the island as U.S. territory is scheduled to take place March 25 during the Key West Heritage Festival at Mallory Square. The official celebration kicked off in January with a historical exhibit at the Custom House Museum.

More about the festival’s event schedule is available online.