From one gallon to one acre: colossal vine earns postmark 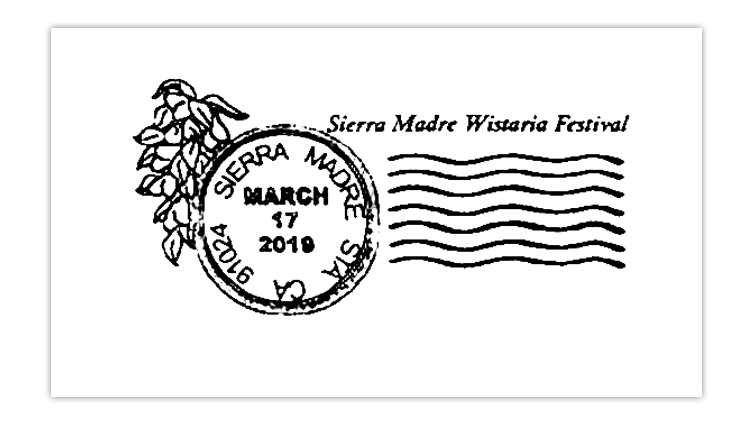 A postmark has been issued for the annual Sierra Madre, Calif., Wistaria Festival.

Organized by the city’s Chamber of Commerce, the 2019 gathering was held on St. Patrick’s Day and included food trucks, live jazz music, local vendors and the Sierra Madre auto show.

But the main attraction was the world’s largest flowering vine — a title certified by The Guinness Book of World Records — as this is the only time each year it is open to the public.

Wistaria (also known as wisteria) is a climbing shrub of the pea family, with hanging clusters of pale bluish lilac flowers.

According to an article written by historian Phyllis Chapman on the website of the Sierra Madre Chamber of Commerce, the story of “the vine” began in 1894 when new home­owner Alice Brugman and her neighbor traveled by horse and buggy to a nursery in Monrovia, Calif., where she bought a gallon of wisteria for 75¢.

“She planted it in a corner of her front porch, remarking to her neighbor: ‘They say wistaria grows fast.’ And grow it did,” Chapman wrote.

Little did Brugman know, her gallon pot would grow to eventually cover roughly an acre. Chapman’s article reports that at the height of bloom, the vine has 1.5 million blossoms, weighs 250 tons and has branches that extend 500 feet.

To obtain the postmark for the plant’s yearly festival, address your request to: