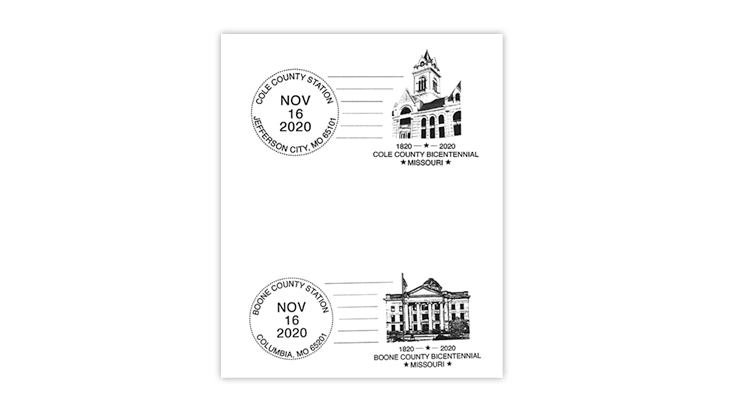 The Cole County postmark shown here features its historic courthouse, a magnificent three-story Romanesque revival-style structure built in 1896-97. The stone building was listed in the U.S. National Register of Historic Places in 1973.

The Cole County website shares the history of the region: “As early as 1816, a few families from Kentucky and Tennessee located within the present limits of Cole County. It was organized Nov. 16, 1820, when it was named for the intrepid pioneer, Capt. Stephan Cole.”

Located in central Missouri, Cole County is home to the state capital, Jefferson City. The county is bounded on the north side by the Missouri River, which separates it from Boone County, the subject of the second bicentennial postmark shown here.

The Columbia, Mo., cancel also displays a courthouse. The first Boone County courthouse building was constructed in 1847, and although a new courthouse was built from 1906-09 at the same site, the original columns in the front remain today.

According to the Boone County Bicentennial Celebration website: “Boone County was organized Nov. 16, 1820, from a portion of the territorial Howard County. The area was then known as Boone’s Lick Country, because of a salt lick which Daniel Boone’s sons used for their stock.”

To obtain the postmarks, address your requests to: