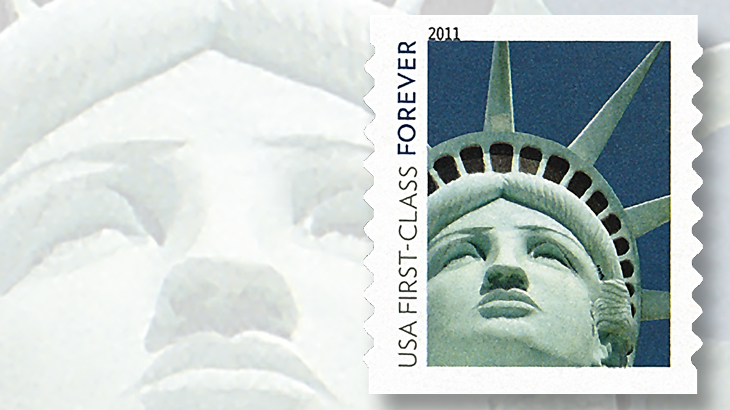 A federal judge has declared that the United States Postal Service owes Nevada sculptor Robert S. Davidson nearly $3.6 million for the unauthorized use of his Statue of Liberty artwork on a 2010 forever stamp.

The ruling, by Judge Eric G. Bruggink is the second decision by the U.S. Court of Federal Claims holding the Postal Service liable for using copyrighted art without the approval of its creator.

Unlike a 2013 case that involved the unapproved use of statues of soldiers on the 37¢ Korean War Veterans Memorial commemorative, the new case revolved around a definitive, or “workhorse” stamp that was issued in much larger numbers.

The potential award to Davidson is much bigger, but Bruggink’s June 29 ruling is based in large part on the Gaylord case.

The new decision was a setback for postal officials who argued that the agency has never paid an artist more than $5,000 for a stamp image.

Davidson’s lawyers had argued he should get more than $10 million for the unapproved use of an image of the Lady Liberty statue he created for the New York New York Hotel and Casino in Las Vegas.

In his 37-page ruling, Bruggink pushed aside the government’s arguments that Davidson statue was not original art and that the Postal Service was free to use the art without having to secure the artist’s approval.

“We are satisfied that plaintiff [Davidson] succeeded in making the statue his own creation,” the judge declared.

Citing “plainly visually observable” differences between the faces of the original statue and the one outside the Las Vegas hotel, Bruggink said, “We agree that Mr. Davidson’s statue evokes a softer and more feminine appeal.”

“The eyes are different ... the jaw line is less massive and the whole face is more rounded,” he said.

It was those very features, Bruggink said, that drew former Postal Service stamp design chief Terry McCaffrey to select the Davidson image for a stamp to replace the Liberty Bell as the major forever stamp.

McCaffrey later said he would have never selected Davidson’s image via a stock photography website if he had known it was not of the original Statue of Liberty.

David A. Partenheimer, a postal spokesman, told Linn’s, “We are reviewing the decision and will comment if and when appropriate.”

Todd Bice, one of Davidson’s lawyers, issued a statement saying his client was “pleased that after a full trial, the Federal Court of Claims recognized the significance of his artistic work in creating the Las Vegas Lady Liberty statue and enforcing his copyright.

"As the court noted, Mr. Davidson’s artistic creation of the Las Vegas Lady Liberty is highly unique and attractive, which is what prompted the US Postal Service to select a photo of his work for the second ever Forever Stamp, over hundreds of other images," the July 3 statement said.

“It is unfortunate that a citizen like Mr. Davidson should have to expend his resources and the court’s resources to receive the attribution which the law accords him,” the statement continued.

"For too long, the Postal Service has endeavored to ignore the rights of artists like Mr. Davidson, simply taking intellectual property with after-the-fact offers of nominal compensation, essentially asserting that because of its government monopoly it is empowered to do so.

“Fortunately, for all artists, the court has informed to Postal Service that the law is otherwise.

Mr. Davidson hopes that the Postal Service will at long last own up to what it did and do the right thing, including recognizing his rights,” the statement concluded.

If the Postal Service follows the path it took with the Gaylord case, it will likely appeal the ruling to the U.S. Court of Appeals for the Federal Circuit.

The judge said he wants both sides to present arguments on the amount of interest Davidson should be awarded on the nearly $3.6 million.

Bruggink said he took into account the Postal Service’s financial plight in his ruling.

He noted that the Postal Service collected more than $4 billion in revenues from sales of Davidson’s Lady Liberty and the Flag forever stamp (the two stamps were printed se-tenant).

There was some profit in sales of those stamps “over $70 million for the Lady Liberty stamp alone,” he said.

“Some portion of that is owed to plaintiff as damages,” he said.

Bruggink did accept one of the Postal Service’s points, that the agency has been suffering large losses in recent years.

“In essence each stamp redeemed for service is a small contract on which USPS will lose money,” he wrote.

That was why he did not place a running royalty figure on the stamps used to mail letters.

“Thus we find the nominal and historically accurate sum paid by the Postal Service, namely $5,000, to be an appropriate flat for this use.”

The judge said the government’s only real defense is that its use did not particularly harm the plaintiff’s business as an industrial sculptor.

“That may be true,” he added, “but we also note that it certainly did not benefit him. The Postal Service offered neither public attribution nor apology.”