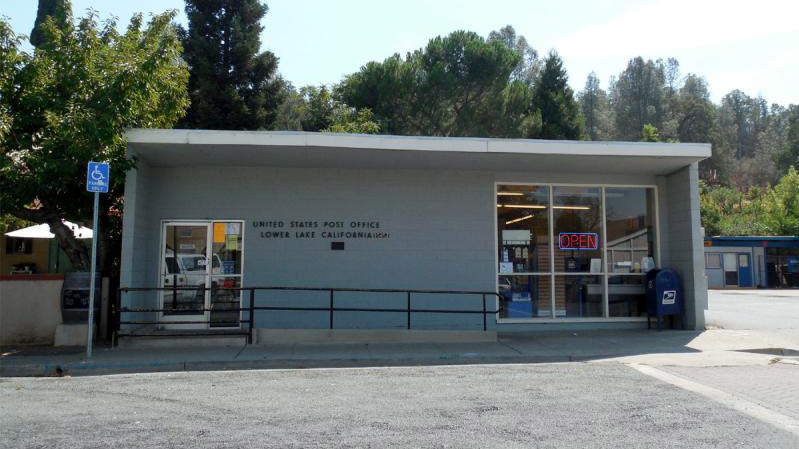 The Lower Lake (Ca.) post office, pictured here by the Postmark Collectors Club in 2015, was one of nearly 200 buildings that suffered damage from a wildfire that ripped through the Northern California town on Aug. 14.

A Northern California town’s post office suffered damage when a wildfire tore through the town on Aug. 14, the San Francisco Chronicle is reporting.

The fire destroyed four homes in the town of Lower Lake, population 1,200, and also hit the main business district, where the post office is located.

"The fire broke out Saturday afternoon and grew to more than 3 square miles as firefighters struggled to get a handle on the largely out-of-control blaze amid hot, windy conditions,” the Chronicle reports.

The charred aftermath of the wildfire that swept through Lower Lake can be found in numerous tweets since the damage was done over the weekend, including a powerful shot of the Lower Lake post office surrounded by flames.

Linn’s Stamp News was alerted to the post office’s precarious position by Postmark Collectors Club member Steve Bahnsen, who also provided the image of the Lower Lake post office we’ve featured at the top of this story.

According to The Press Democrat, a local newspaper in Northern California, a man has been charged with arson in connection with the fire, which in total burned 4,000 acres and destroyed 268 structures including 175 homes.

Damin Pashilk, 40, of Clearlake, is believed to have been responsible for starting 11 fires since July 2015, with this particular fire, referred to as the Clayton fire, being the largest. He appeared in court for an arraignment Aug. 17 but did not enter a plea.

No news reports that Linn’s has come across have updated the status of the post office building.