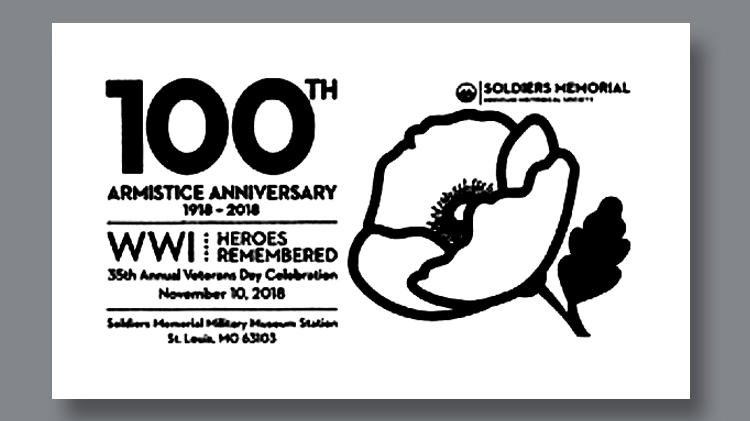 A Nov. 10 postmark honors those who sacrificed their lives in World War I.

Soldiers Memorial Military Museum in downtown St. Louis, Mo., has issued a pictorial postmark honoring the armistice that ended World War I a century ago.

The postmark is dated Nov. 10 to coincide with the museum’s 35th annual Veterans Day celebration.

Soldiers Memorial Military Museum reopened Nov. 3 after two years of renovations. The 80-year-old art deco landmark received a much-needed face-lift to bring it up to today’s standards. Many new exhibits and features also were added, including “St. Louis in Service,” a long-term exhibit that covers military history from the American Revolution to today. The $30-million-dollar overhaul was funded by anonymous donors.

The postmark features a poppy, a flower that has been a symbol of WWI for close to a century, due in large part to the poem In Flanders Fields written in 1915 by Canadian physician Lt. Col. John McCrae.

The poem describes a field of poppies growing in and around soldiers’ graves marked with crosses.

The museum offered a poppy project during the first week of its reopening, where museum visitors crafted poppies and wrote the name of a fallen St. Louisan on the stem. The poppies were carried by children and adults in the Veterans Day parade — 1,075 in total, one for each local service member who died in the war.