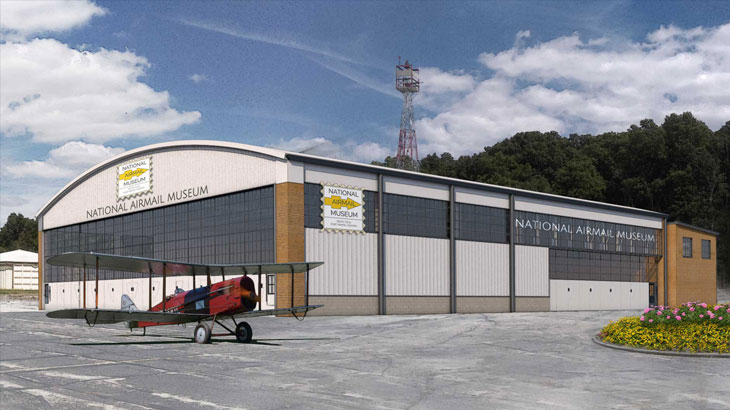 The airmail hangar at Smith Field in Fort Wayne, Ind., has been designated as the future site of the National Airmail Museum. The FAA Reauthorization Act of 2018, signed into law on Oct. 5 by President Donald J. Trump, includes a provision to officially establish the Fort Wayne site as the nation’s new museum dedicated to the history of airmail.

The museum at Smith Field’s Hangar 2 will be funded by private donations, not by tax dollars. A 2017 report suggested the museum project would cost about $2.5 million.

The affirmation of the museum site follows efforts by U.S. Sen. Todd Young (R-Ind.) and Rep. Jim Banks (R-Ind.) to secure the National Airmail Museum designation and to highlight the hangar’s role in airmail history.

“Today’s vote to pass this FAA reauthorization benefits Hoosiers, and the safety and security of Indiana’s airports,” Young said. “I’m glad my bipartisan legislation to designate a national airmail museum in Fort Wayne was included in this authorization, and I look forward to seeing this project move forward.”

Banks said: “I’m pleased that the House and Senate reached a deal on a final FAA package that includes my language to recognize the hangar at Smith Field. The hangar at Smith Field is the perfect structure for a National Airmail Museum. The Friends of Smith Field have worked tirelessly to make this museum a reality, and I am proud to support this initiative.”

Section 526 of the bill presented to the president notes that commercial airmail carriers began operations at Smith Field in 1930.

The museum will educate the public on the role of airmail in aviation history and honor the role of the hangar in the history of the nation’s airmail service, according to the wording of the bill, which also notes that the museum will not be a unit of the National Park System.

“The National Airmail Museum will be a place for the community to come together and celebrate the storied history of Fort Wayne and the city’s role in aviation history and the development of the National Airmail Service,” according to information at its website.

Plans call for the museum to feature interactive hands-on exhibits and artifacts, and also to serve as headquarters for Chapter 2 of the Experimental Aircraft Association. A gift shop and dining area are also planned.

“Visitors will be transported back to a time when Fort Wayne played an essential role in the development of the Airmail Service and supported the efforts of WWII,” the museum notes.