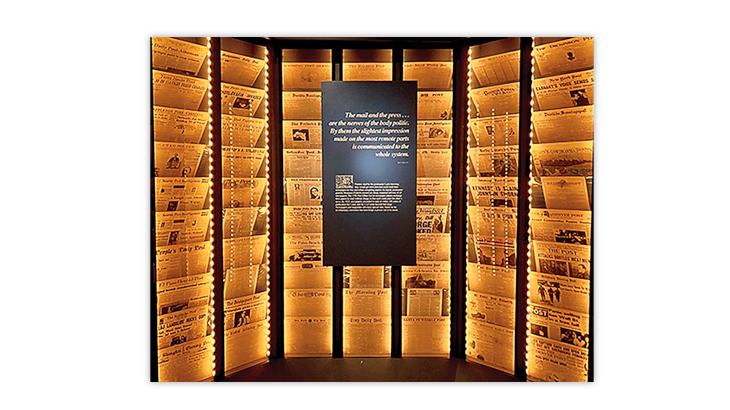 For more than two years, Lesley Rich had been troubled by a quotation from former United States Vice President and slavery proponent John C. Calhoun that hung in the National Postal Museum.

When the Washington, D.C., museum reopened Aug. 27, Rich and her son Josh were among the first visitors, and they were delighted by what they did not see on a wall near a statue of Benjamin Franklin.

“It’s gone. This is awesome. We have to text Daddy,” the Aug. 30 Washington Post quoted Rich as telling Josh as she viewed a blank panel where Calhoun’s words had been.

“Thank God they did the right thing. I’m so happy,” she said.

It wasn’t Calhoun’s words that Rich found offensive. They were all about postal matters: “The mail and the press … are the nerves of the body politic. By them the slightest impression made on the most remote parts is communicated to the whole system.”

What troubled Rich was that they came from an unapologetic champion of slavery.

Upset that Calhoun was given a place of honor in the museum, Rich fired off letters to the museum’s executive director Elliot Gruber and Smithsonian secretary Lonnie G. Bunch III.

“While we are certainly aware that Vice President John Calhoun’s policies and proslavery viewpoints are reprehensible, the context of this quote relates exclusively to mail (and the press). As such, we will honor our founding historians’ research and conclusions in selecting quotes that relate directly to the historic value of mail in binding the nation,” Gruber wrote to Rich on Nov. 25, 2019.

“Should the National Postal Museum redesign its lower-level spaces in the future, we will look for opportunities to replace the quote,” he said.

Rich was not moved. “It was, ‘We get the message but we’re not doing anything,’ ” she told the Post.

She continued to protest the quotation.

“It’s not the most inspiring quote,” she told the Post. “How did it get there in the first place?”

In May, while the museum remained closed because of the pandemic, Gruber told Rich the quotation would be removed or covered.

So she returned on the first day of the museum’s reopening and discovered that Gruber had been as good as his word.

Rich, an official at the nonprofit advocacy group International Campaign for Tibet, said that she learned about Calhoun from her husband. He attended Yale University, which dropped the Calhoun name from one of its colleges in 2017.

“If you can change the name of a college, you can take down a quote,” she said.

Gruber explained to the Post that “There are plenty of other quotes and this is not the appropriate quote to have up.”

He also said that the change reflects a new initiative at all Smithsonian museums called “Reckoning with our Racial Past.”